skip to main content
Return to Fordham University
You are at:Home»Arts and Culture»Fordham Theatre Adjusts to Telling Stories Without Physical Stages
Students rehearsing for Men on Boats, the first of four plays that Fordham’s Theatre program will be staging online this year.
When it became clear that fall classes would have minimal face-to-face instruction, Stefanie Bubnis, the managing director of the Fordham Theatre program, had to decide whether to cancel the department’s hallmark mainstage season or carry on in some sort of new, unprecedented fashion.

“As artists, our students are resilient and have the skill set to adjust and adapt accordingly. I felt it was important for our collective morale to forge ahead with the season. Our mainstage season is one of our anchors that we build our year upon and keeping it intact as everything around us was changing so rapidly was important to us,” she said.

“I wanted us to face the challenges of the semester head-on. That meant pushing through and finding solutions. Going off the grid is not what the spirit of the theatre and our program is about. The show must always go on,” she said, adding that most of the program’s classes are being offered in a hybrid online/in-person format.

And so, on Oct. 8 at 8 p.m., the department will kick off a season titled “Into the Unknown” with a virtual production of Jaclyn Backhaus’ Men on Boats. The show, which will be directed by Sarah Elizabeth Wansley, will run on Zoom for three nights, free of charge. It will be followed in November by a virtual production of Chekhov’s Uncle Vanya. In the spring, productions of Water by the Spoonful by Quiara Alegría Hudes and Everybody by Branden Jacobs-Jenkins will follow.

Many of the theater program’s fall classes will revolve around the mainstage season, with professors using remote learning—and remote performances—as a way to explore important elements of acting and collaboration. 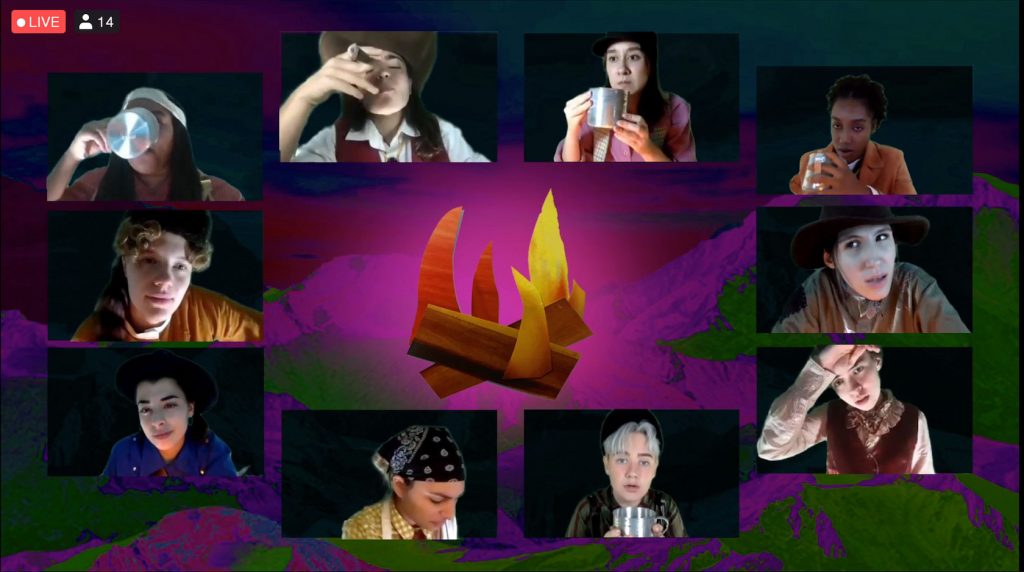 Men on Boats will be shown free of charge for three nights, beginning Oct. 8.

Connecting to Each Other Through Screens

Dawn Saito, an artist-in-residence who teaches Acting 1 and Movement for Actors, said she has had success on Zoom teaching the Laban movement analysis, a method and language used for describing, visualizing, interpreting, and documenting human movement.

“I have many exercises for opening up the body so the actor can transform into different characters, textures, and colors,” she said.

“They have enough room to be able to inhabit these images that I prompt them with.”

Scene work between two actors can be a challenge when a student is not in the same physical space as their partner, but that too can be overcome. During class, Saito sends students to breakout rooms, where they work together to listen and respond to each other.

In the exercise, one actor will move while the other remains frozen. The actor that is frozen will then respond to the movement of the one who is moving. After practicing with each other, they rejoin the larger group and share their progress. (To see movement pieces created by Saito’s students during quarantine last spring, click here.)

“A much as possible, I’m asking actors to radiate their energy, so that they’re connecting to their partners through the screen,” Saito said.

To create the appearance of action, students have practiced “handing” a cup of tea to one another by moving it toward the camera, and when they move their hand, the person on the other side will seemingly receive it. Because students are learning how to engage in their whole body, she isn’t worried that it’ll be difficult to transition back to in-person acting once the pandemic has subsided. In any case, actors have a primal need to be heard, she said, regardless of the platform.

“Art is necessary, especially in challenging times. People need an outlet, they need to see their stories told, and the cathartic process is healing,” she said. 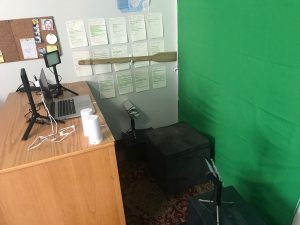 When Fordham College at Lincoln Center senior Chloe Rice makes her appearance in Men In Boats, this will be her “stage.”
Contributed photo

Reflecting on Different Aspects of Theater

Michael Zampelli, S.J., an associate professor of theater who moved to Fordham this year from Santa Clara, is one of three professors teaching theater history this semester. His class which meets both online and in-person, focuses on the purpose of theater.

His class gives students a chance to reflect not only on what people thought of the theater historically and how it functions in society, but also what is happening to them right now, he said.

“It’s encouraging a sort of self-implicating reflection on what they do in a way that I don’t think would have been the case if we were doing this pre-Covid. Even though you hoped they were asking themselves questions like ‘How this is affecting me?’ and ‘How are we learning about how theater companies form?’—you could always have not gone down that road,” he said.

“Now it’s much harder to not go down that road, precisely because they’re responsible for generating theater during a time of great upheaval. The questions are not theoretical questions.”

Raekwon Fuller, a second-year student at Fordham College at Lincoln Center, created this piece, which is meant to evoke what it feels like to be in Fuller’s universe, for Dawn Saito’s Movement for the Actor”class.

Learning to Speak the Same Language

Ntokozo Fuzunina Kunene, a designer who joined the faculty last year, has been teaching the class Theater Collaboration remotely from her native Johannesburg in South Africa. The class, which she co-teaches with acting program head Matthew Maguire, helps future directors, playwrights, designers, and actors speak to each other more effectively.

“I’m a costume designer, but I can’t necessarily think in terms of lighting, so I still want to make sure that I’m able to communicate with the light designer, because so much of our work impacts each other,” she said.

“When they say, ‘Oh, this is too bright,’ I need to be able to understand how to help reduce the brightness. Maybe something that the actor is wearing is too white. So how do we work together to combat that?”

To achieve that, the class is structured around productions that students from different theater tracks, such as acting and design, are invited to create independently based on prompts, which range from lengthy conversations that Kunene and Maguire record in advance to simple five-word poems.

Clint Ramos, the head of the Design and Production track, changed the syllabi in his classes so that instead of working on several projects, students are focusing on one mainstage production for the whole semester.

Rather than adapting traditional theater to the current circumstances, he sees students innovating to create a new form. When you stage a production via Zoom, for instance, it’s worth investigating what it means to say that characters in a play are together in a specific room.

“Does it mean the actors are using the same background? The same lighting?” he said.

“For designers, that bridge already existed, because a lot of the designs are also created for film. This gave us an opportunity to lean in on that bridge. We’ve kind of overlooked this because we were so into live performance. We’re saying, let’s be more limber and see that you can do. The more limber the students become, the more possibilities they have for the future.”

Ramos has also enlisted five university theater programs in the Northeast for an online production stemming from themes in One Flea Spare, a 1995 play by Naomi Wallace set in a plague-ravaged London during the 17th century. Students are virtually attending classes at other universities and are collaborating with each other on works connected to the play. When it is finished, the recordings will live on a website hosted by Fordham.

Liliana Gutierrez, a second-year student at Fordham College at Lincoln Center, created this piece, which is meant to evoke what it feels like to be in Gutierrez’ universe, for Dawn Saito’s Movement for the Actor class.

Theater is also big business, and that business is facing hard times; Broadway has been dark since March. Students who took Theater Management with Stephen Sosnowski, FCLC ’03, normally attended class at his office in Times Square. Sosnowski is senior vice president at SpotCo, where he has spearheaded advertising campaigns for more than 50 Broadway shows and cultural institutions.

His first remote class featured guest speaker Matt Ross, creator of the COVID-19 Theater Think Tank, which is working on processes for theaters to reopen safely. Sosnowski was reticent about the class at first but said he felt optimistic by the energy students brought to the meeting.

“I got a little emotional at the end of the class. These students coming to class; I’m in awe of them, frankly,” he said.

He admitted it’s impossible to predict with certainty what the industry will look like when it emerges from the pandemic. But he’s tried to provide a window into that future, through guest speakers such as Victoria Bailey, executive director of the Theater Development Fund; and Adam Siegal, managing director of Lincoln Center Theater.

“Everything I talk about is, ‘What was it like pre-March 12, and what do we think it’ll look like and what will the opportunity be like,’” he said.

“The key word is opportunity. I see this as a time where there’s a lot of opportunity to enact change. We can figure that out together.”

For a “backstage” tour of Men on Boats by senior Chloe Rice, visit the theatre department’s Instagram page.