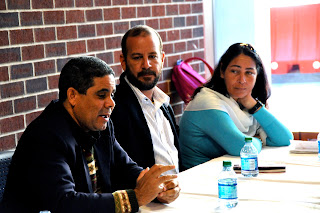 The event began on Oct. 4 in San Juan, Puerto Rico. It continued with more than 30 diverse writers from Spain and Latin America at various venues across New York City from Oct. 8-11.

La Festival de la Palabra is an international literary festival that brings together some of the most exciting contemporary authors writing in Spanish with diverse academic and non-academic community audiences to debate, explore, and celebrate writing from Latin America, Spain and its Spanish-speaking diasporas, including the United States, said Mayra Santos-Febres, a Puerto Rican author, poet, novelist, professor of literature, and literary critic who has garnered fame at home and abroad for her first two collections of poetry, Anamu y manigua and El orden escapado.

“We know Puerto Rico is a natural destination for so many kinds of tourism,” she says. “Three years ago we asked ourselves, why not host a literary festival in order to attract even more people?”

This year’s festival included writers from Argentina, Chile, Colombia, Cuba, the Dominican Republic, Guadaloupe-France, Mexico, Puerto Rico and Spain to New York City to participate in readings, presentations, for a, debates, and workshops.

At Fordham’s Lincoln Center campus on Oct. 11, there were readings and discussion on, “Writing (in) the Hispanic Caribbean,” with Anna Lidia Vega Serova of Cuba, Pedro Antonio Valdez of the Dominican Republic, and Luis Negron of Puerto Rico. The event was hosted by the Department of Modern Languages and Literature.

Dominican writer, Valdez, said people have accused be of being too Dominican in his work. Responding to a student question about the inspiration for his stories, he said, “I want to tell the stories of my barrio. I want to impress what it is like to my readers.”

Writer Charlie Vázquez, author of the novel Contraband (Rebel Satori Press, 2010), and the bilingual poems Meditations, coordinated the New York City portion of the festival and helped choose the writers along with Febres and a colleague in Lisbon.

As an active writer, Vázquez says he felt honored to invite friends who are actively writing and publishing to participate in the festival.

“And they, in turn, get to meet writers from around the world,” he said, adding that the festival has inspired him to start writing in Spanish.

“I was educated in English in New York City public schools and brought up in bilingual homes where some of my older relatives only spoke Spanish. One of the things I’ve learned as a result of all of this is that Spanish is more than just a beautiful and popular and inherently poetic language, it’s also a passport to a large portion of the Earth’s readers, on different continents. I have grown as a writer because of it, and that, in itself, is a priceless education,” Vázquez said.