skip to main content
Return to Fordham University
You are at:Home»Arts and Culture»Dear Editor: The Impact of Advice Columns in the Yiddish Press
Ayelet Brinn, Ph.D., at Lincoln Center on Feb. 13. Photos by Jonathan Heisler
What draws people to advice columns? Is it the advice, entertainment value, or even just plain old fashioned schadenfreude?

Ayelet Brinn, Ph.D., Rabin-Shvidler Post-Doctoral Research Fellow, posed these questions to the audience in her lecture about the American Yiddish press at Lincoln Center on Feb. 13.

Brinn, who was introduced by Shvidler Chair in Judaic Studies and professor of history Magda Teter, Ph.D., said that before talking about the significance of advice columns in Yiddish newspapers, it was important that the audience “think about the various ways people read and interact with advice columns and the fact that this is a media that is set up to be read by different readers in different ways.”

The Rise of the Yiddish Press in America

Yiddish speakers in the United States increased significantly in the second half of the 19th century with a wave of mass immigration from Eastern Europe, and by the 1920s, Yiddish newspapers were a popular option for immigrants seeking guidance in their new home. Many Jewish immigrants never read newspapers before coming to America, said Brinn, but they began to see them as an indispensable part of their lives for three reasons. 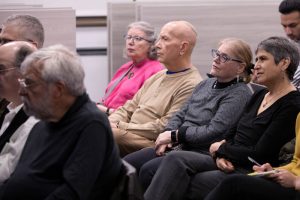 First, they helped acclimate readers to American life. Second, they created a sense of community by binding Yiddish readers to each other based on what they read. Lastly, they taught people who didn’t normally read newspapers that they could be informational and provide guidance on how to navigate their daily lives.

A good example, she said, is A Bintel Brief, which was one of the most popular advice columns of its time. Abraham Cahan, the longtime editor of the Forward, the most popular Yiddish daily, introduced A Bintel Brief to the paper in 1906, after asking readers to write to the paper with stories from their lives in the hopes of encouraging their relationship with the newspaper.

One letter in particular peaked Cahan’s interest, Brinn said. Written by a housewife, the letter sought the paper’s advice on how to confront her neighbor, who she suspected had stolen and pawned her husband’s watch. Interestingly, the woman was not upset, but “described her empathy for the poverty that drove her neighbor to steal, recognizing that this neighbor was also a poor worker,” she said.

Cahan was excited by this letter because it was written by an underserved demographic that he wanted to attract to the paper, and the emotional aspect of it was exactly the type of content he was looking for to better model his paper after American papers.

As A Bintel Brief began to increase in popularity, the authenticity of its letters was called into question. “Many Yiddish journalists, especially his loudest critics, assumed that the improvements editors made to Bintel submissions went beyond the correction of language and extended either to rewriting submissions or even fabricating letters when the Forward did not receive letters that fit the themes Cahan or his staff wanted to explore,” Brinn explained. 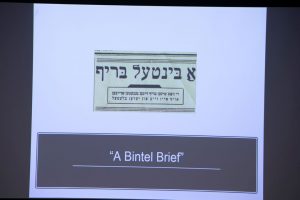 Cover of A Bintel Brief

Since not all submissions were printed and the submissions were never kept in records by the Forward, there isn’t enough evidence to support either claim that the letters were real or fake.

“I’m inclined to believe that the truth lies somewhere between these extremes,” Brinn said. “Some letters were fabricated, some were real, and most letters that were real were significantly edited by the Forward staff.”

During a Q&A session after the presentation, an audience member confirmed that they had friends who actually read columns such as A Bintel Brief, and noted that “it didn’t really matter to those people if the letters were true or if they weren’t true. The advice didn’t matter either. It was really entertainment.”

“I think that one of the really important things about advice columns is that people could read them in all of these different ways,” she said.

“They did offer people advice that they could use in their lives, but other people could read these same columns for entertainment purposes.” 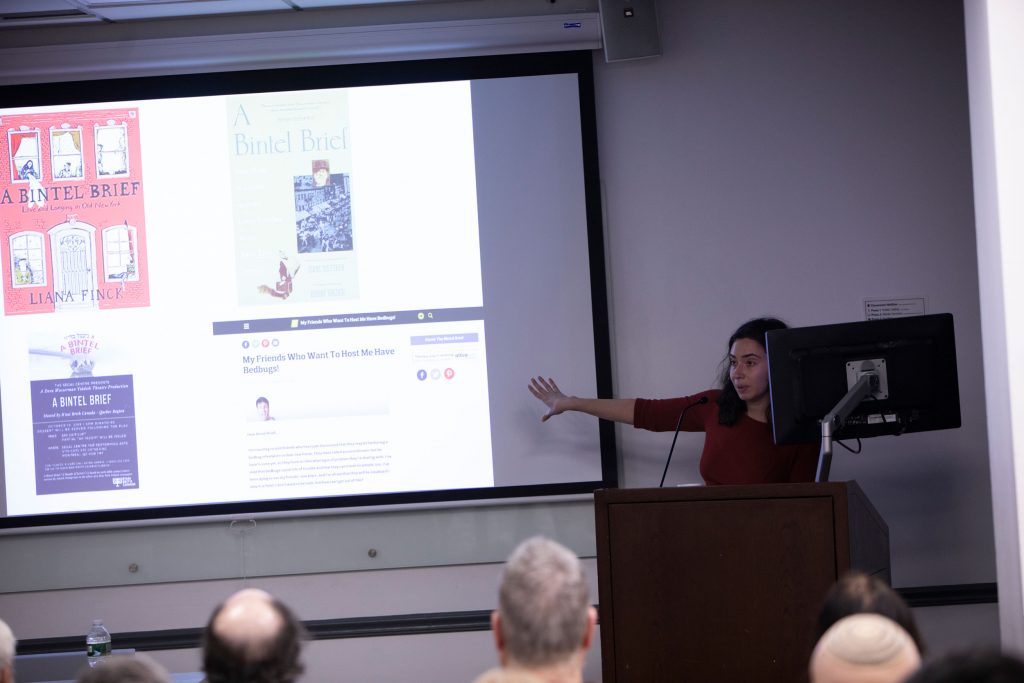