skip to main content
Return to Fordham University
You are at:Home»Arts and Culture»At Fordham, Army Veteran Finds His Playwriting Muse

Living in Los Angeles, disaffected with his work in the entertainment industry, Gordon Penn felt he needed to radically change his life in order to achieve his goal of becoming a writer. 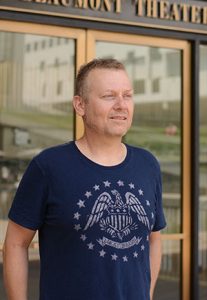 So he joined the Army. Enlisting at age 39, he felt “fairly terrified” about the change but also felt it would “blow the carbon out of [his]system” and jolt his creativity.

It did that and more. It put him on the path to Fordham, where as an undergraduate he learned playwriting in intensive classes that both revealed and honed his abilities. The 2015 graduate also got to take classes in the Fordham/Primary Stages MFA program in playwriting and learn from top-caliber instructors like Cusi Cram, and won admission to the graduate playwriting program at Columbia University, where he’ll study this fall.

It wouldn’t have happened anywhere else, he said.

Fordham “set everything in motion,” he said. “It’s an amazing school, the craziest of places. I realized from the minute I got here [that]I could not have had a better opportunity,” said Penn, PCS ’15.

A Missouri native, Penn was always drawn to the arts. After he briefly attended Missouri State University, he worked for several years in Chicago as an actor, theater producer, and publicist before moving to Los Angeles in 1998. There, he founded a management company that placed Brent Sexton on Judging Amy and Sean Gunn on Gilmore Girls. (He heard about the benefits of Jesuit education through Gunn, whose brother Matthew went to Fordham.)

When he grew tired of the work and wanted to write, the Army was appealing because “it was as far away from what I had been doing as I could possibly think of.”

He spent five years’ active duty with the Third Infantry Regiment, the Old Guard, at Arlington National Cemetery and got the idea to go back to college after encouraging many younger service members to do so. He came to New York because his wife is a director and choreographer here and chose Fordham because of its generous financial support for veterans under the federal Yellow Ribbon program, among other reasons.

“The whole plan was to write something,” he said. While he majored in visual arts, he also loaded up on creative writing classes. He “fully took off” under the tutelage of playwriting instructors Jackie Sibblies-Drury and Daniel Alexander Jones, who also helped him get approved to take classes in the Fordham playwriting MFA program, offered jointly with theatre company Primary Stages.

In his classes, Penn practiced playwriting in the intensive way that a military man might appreciate: “working so fast that you don’t have time to think about it,” and revising so much that there’s no time for qualms and anxieties.

Under this kind of direction he wrote his play, 383 Keys, which he submitted to the Playwriting MFA program at Columbia University, where he will start in the fall. Named for the number of keys available for Gramercy Park, New York City’s only private park, it’s an allegory for the fence along the Mexican-American border that some in this country would like to build, he said.

Since graduating in May from the School of Professional and Continuing Studies with a 3.865 grade point average, he’s kept working on a play he developed under the supervision of Cusi Cram at Primary Stages.

“I owe them a ton,” he said, referring to her as well as Jones and Sibblies-Drury. “I tell everybody how Fordham is one of the most amazing things anybody can do for themselves.”