skip to main content
Return to Fordham University
You are at:Home»Arts and Culture»Actor Joe Morton to Teach at Fordham 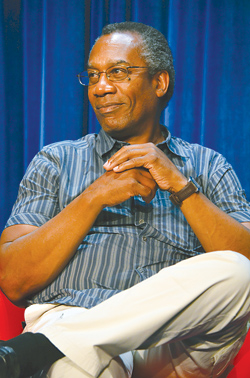 Tony-nominated veteran stage, television, and film actor Joe Morton has been appointed the Denzel Washington Endowed Chair for Theatre for 2012.

Morton, a native New Yorker who studied drama at Hofstra University, had his first big hit in 1984, when he starred in John Sayles’ The Brother from Another Planet. A constant presence in the acting world since the late ’60s, he has acted in films such as Of Mice and Men, Forever Young, Terminator 2, and Speed. A role in the 1974 Broadway musical Raisin earned him a Tony nomination and a Theatre World award.

Morton spent his early childhood in Europe, where his father was stationed as an Army intelligence officer. When he returned to live in Harlem, children picked on him because of his foreign accent. The experience led Morton to comment in the New York Times, “Race prejudice has nothing to do with color. It has to do with being the stranger.”

Morton follows Phylicia Rashad as the inaugural holder of the chair, which was established last year with a $2 million gift from Denzel Washington, FCLC ’77. During the fall semester, he will teach the theater course, Creating a Character.