skip to main content
Return to Fordham University
You are at:Home»Inside Fordham»Officers Commissioned for Service at Fordham 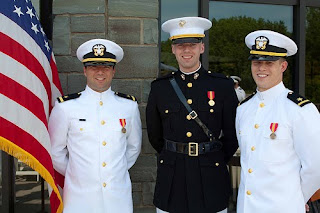 Fordham College at Rose Hill (FCRH) alumni Matthew Sanders and Devin White were commissioned as Ensigns into the United States Navy. Sanders, who received his degree in biology, was selected for duty as a Surface Warfare Officer, Nuclear Option. White, who received degrees in history and classical civilization, received the Distinguished Midshipman Graduate award for his work as a Battalion Platoon Commander and his numerous other contributions to the Battalion over the years in the NROTC Unit.

Allan R. Boehm, who received his degree in political science from FCRH, was commissioned as a 2nd Lieutenant into the United States Marine Corps. He will report to the Basic School (TBS) in Quantico, VA.

Sixteen newly commissioned officers from SUNY Maritime attended the event. Friends and family were able to participate in the joyous occasion as they pinned on the new officers’ rank insignia.