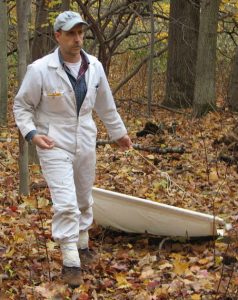 The Tick Index measures the risk of being bitten by a tick in Westchester County and the surrounding area. To be specific, a blacklegged tick, also called the deer tick (and in some parts of the country, the bear tick). And if you’re bitten, and don’t remove the tick very quickly, you stand a pretty good chance of contracting Lyme Disease.

So what does the Tick Index number mean? Several times a week, Thomas J. Daniels, PhD, director of the Calder Center and co-director of its Vector Ecology Laboratory, takes drag samples at Calder. He and colleague Rich Falco, PhD, a medical entomologist with the New York State Department of Health, use a one-meter square piece of white corduroy attached to a wooden bar to go hunting ticks.

“We drag the fabric over a known distance—usually 10 or 20 meters—then turn it over and start counting ticks,” Daniels says. “The ticks are host seeking: they don’t care if it’s me or a square of fabric. We know the size of the drag and the distance, so it’s easy to come up with a mean number of ticks per square meter.”