skip to main content
Return to Fordham University
You are at:Home»Faculty Profiles»Disgust is Appealing, at Least if You’re Trying to Understand People, Psychologist Says 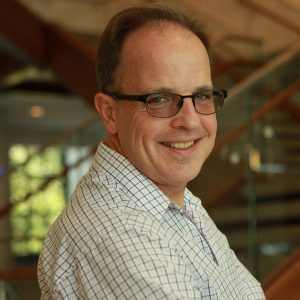 To illustrate the nature of disgust, Dean McKay holds up an untarnished blue pen and poses a hypothetical: He found it buried in something foul and smelly (we’ll spare you), but he’s completely cleaned it.

“So I assure you it’s fine. Would you like to use it?” he asks, rhetorically. “You’d probably have great hesitancy.”

Such is the potency of disgust, says McKay, Ph.D., a Fordham psychology professor who studies its role in behavioral disorders. His work is part of a trend: After years of avoiding it—perhaps understandably—in their research, scholars are giving new attention to this often-irrational emotion that holds such powerful sway.

“There’s an increased recognition that disgust has been underappreciated in the value it has for understanding human behavior, and then also warrants further examination in the role it has in psychopathology,” McKay said.

His own work centers on disgust in conditions like childhood anxiety disorders and obsessive compulsive disorder. He’s in the early stages of devising therapies that target disgust, which is so well-hidden that usually people don’t even mention it when seeking help.

“We tend to not be terribly aware of the things that disgust us, except the most brutally obvious things,” he said.

That’s why disgust is understudied, he said. “In a lot of ways, clinicians have been guided first and foremost by what their clients report, or by what others around them report. It was difficult to see its relevance, and there wasn’t really a good theory that said, ‘Here’s why we might expect disgust to play a role in psychopathology.’”

McKay discovered that role while helping one of his patients deal with her contamination fears. Using a common approach, he asked her to touch various intimidating things—like a fresh, clean trash bag in a wastebasket—and rate her anxiety.

“She said to me, ‘I’m not anxious at all. I find it yucky,’” even though she had expected to be afraid, he said. Other objects brought the same reaction. Over and over, “she used the language of disgust to describe her experience and not fear,” McKay said.

After a survey of his other patients found that disgust at least played a part in their disorders, he delved further into the topic. Last year, in a study of children grappling with anxiety disorders and obsessive compulsive disorder, he found that disgust was somewhat mitigated by traditional therapies that help patients confront the things they fear.

But greater progress calls for new therapies tailored to disgust. McKay noted that fear and disgust involve entirely different bodily systems: Fear is governed by the amygdala—considered the “seat of fear”—and the sympathetic nervous system, which rev the body up into fight-or-flight mode. But disgust comes from the parasympathetic nervous system, which in this case relaxes the body to slow the absorption of any germs picked up from something yucky.

Disgust also involves the insula, a brain region associated with taste and gustatory responses (hence the “gust” in “disgust”). One possible therapy would help people acclimate themselves to the symptoms of disgust, like nausea, but much more research is needed, McKay said.

Disgust comes in different varieties, McKay said. Contamination fear, “the quintessential disgust problem,” can repel people from objects that are obviously clean, like an unused garbage bag or that blue pen he held up. Another variety of disgust, the law of similarity, spooks people when something looks too much like a disgusting object, as in the movie Caddyshack, in which a floating candy bar sends swimmers fleeing from a pool, he said.

Then there’s the “stink of moral decay,” which prompts disgust because of the possible stigma it carries, McKay said. In one classic study, people refused to put on a sweater that, they were told, had once been worn by Adolf Hitler. (Even if it had been washed. And worn by Mother Teresa after that.)

This moral disgust was one aspect of a course he has recently co-taught with English professor Leonard Cassuto. The course, Literature and Psychology of Disgust, covered the influence of disgust in aesthetics, social stigma, prejudice, and racism, as shown in literature. “There’s a litany of books that deal with this,” McKay said.

In other research, he’s working on a project with another scientist who has found that disgust may play a role in some forms of posttraumatic stress, like the kind that follows sexual abuse. McKay also won a grant to study the role of disgust in misophonia, a disorder in which particular sounds cause intense emotional reactions.

He hopes to do more work on trauma and disgust now that disgust is reasonably well established as a research topic.

“I think it’s changing a little bit and gaining a little bit more acceptability,” McKay said. “We’re now at a point where some of those basic questions have really been satisfactorily answered and so now it’s moving to a different realm.”