skip to main content
Return to Fordham University
You are at:Home»Inside Fordham»Faculty Reads»A View from the Left Bank of the Hudson

Left Bank of the Hudson: Jersey City and the Artists of 111 1st Street (Fordham University Press, 2017), by Fordham Law librarian David J. Goodwin, looks at cultural preservation and urban planning through a chronicle of one Jersey City building.

Q.     What inspired Left Bank of the Hudson?

I moved to Jersey City in 2005, and my relocation there in some ways was the genesis for this book. Also, I was working on my urban studies degree and had a strong interest in history. I saw this building being torn down and was perplexed as to why, because it was architecturally interesting and had this industrial aura to it—industrial chic, if you will. In so many cities and neighborhoods, this type of building was being preserved. 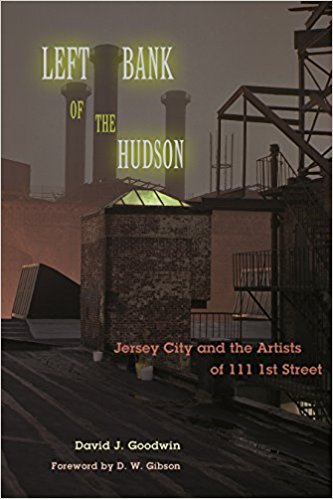 Then I happened upon an article in a local publication talking about how there was this artistic community in that building, the 111 1st Street community. Several hundred filmmakers, painters, sculptors, musicians, and artists had cycled through this building, and at one point it was the largest concentration of artists on the East Coast outside of Westbeth in Manhattan. But in 2005, they were evicted, and then they attempted to save the building for its historic value.

No. The building was torn down in 2007. The artists dispersed. Some are still in Jersey City, some are in Brooklyn, some live elsewhere in the country, some—quite a few—moved up to the Hudson River Valley. One artist I talked to quite a bit is the sculptor William Rodwell. He told me when he left, he had to move into a family member’s apartment. After he left 111 1st Street, he was basically couch surfing.

The neighborhood today is known as the Powerhouse Arts District, which is a misnomer because there are no artists and there’s no visible archeology or signs that there were artists there. It’s primarily high-end real estate. In the 1980s, you had the waterfront and downtown Jersey City becoming a very attractive option to people priced out of New York City and Brooklyn.

This neighborhood shifted with the zoning. I equate the 11-or-12-square-block area to a ship in a bottle, where you had this tiny cluster of preserved 19th-century, early 20th-century warehouses that could have been a really interesting piece of the city to preserve. In the book, I strike the comparison to Brooklyn’s DUMBO, which is a collection of warehouse and industrial buildings of roughly the same time period as this area in Jersey City. But New York developers saw the wisdom of preserving them. You go to DUMBO today and it still has its own feel, its textures, its cobblestone streets. There’s a lot of jobs that have migrated there, too.

I think all of the above. Jersey City in my opinion has a history of bad planning. When this building was being torn down and the area was being built up, the philosophy of the government was ‘any investment is a good investment.’ They chased after the tax dollars. It was build, build, build, instead of thinking, ‘okay it’s good to attract people, but with that comes other expenses and other planning.’

I guess what I’m pointing out is the city’s failings: New park space, transportation, and other needs not being met.

And by the way, the 1st Street property is just a hole in the ground now. They still haven’t done anything; it’s just sitting there. So I’m not sure what the rush was to push the artists out.

I think the Jersey City government has not had a real vision of what the city could be, and I approach this 111 building as a microcosm for everything that was going on in the city, whether it be politics, economics, or the demographics, within that 30-year scope. Even with the artists forced out, if the city had followed the stated development plan, it could have been a really interesting piece of the city to preserve and use as an incubator for arts, business, new technology, or new residences.

And as cities become desirable again and there is rapid gentrification, my story is an example of what you don’t want to happen, and of the importance of learning how to manage forces within your community and make sure you have some input in the process.

(Goodwin will present his book along with several 111 artists’ works on Oct. 15 at Jersey City’s 111 1st Street: A Community of Artists.)