skip to main content
Return to Fordham University
You are at:Home»Inside Fordham»‘Response’ Screening Brings Taste of Gitmo to Fordham 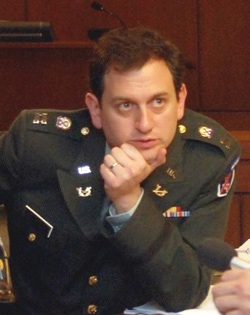 Thousands of pages of transcripts detailing the Guantanamo Bay military tribunals were the basis for The Response, a roughly 30-minute film that takes the audience inside a fictional prisoner hearing.

Response filmmakers joined Fordham Law faculty members on March 9 to screen the film and discuss its creation and the prisoner situation at Guantanamo.

“When I read the transcripts of what was really going on in Guantanamo, I thought, this is amazing,” said Sig Libowitz, who wrote and directed the film, and played one of the military captains on the tribunal. “Before reading the cases, I thought I had a pretty good sense of it. But I was just stunned.”

One half of the film depicts the hearing of a fictional prisoner named Al-Aquar, who maintains his innocence and repeatedly asks to see evidence that links him to al-Qaida. His frustration mounts when military personnel tell him that he is forbidden from having access to that information. Al-Aquar’s hope for freedom vanishes when he comes to the conclusion that the tribunal is not the fair hearing that he had expected.

“I could definitely hear my clients’ voices in the character of Al-Aquar,” said Martha Rayner, clinical associate professor of law, who founded the International Justice Clinic at Fordham Law to provide legal aid to the detainees. “Initially, many men at Guantanamo had a lot of faith in the hearing process. It was the first time they had the opportunity to be heard in front of a decision maker. But eventually they saw that the hearings were not meant to give them the chance to defend themselves.”

The Response has been hailed by reviewers for presenting the legal conundrum that detainees face while also depicting arguments both for and against keeping the suspected terrorists behind bars.

“I’ve had friends who have been on tribunals, both in the first Iraq war and in the second. They’ve told me that these are really hard decisions,” said Eric Jensen, visiting assistant professor of law. “We know that al-Qaida coaches their insurgents in what to say if they are captured. And we know that people have been turned over to U.S. forces just for the bounty.”

The film also features actors other including Kate Mulgrew and Peter Riegert. Its presentation at Forham was sponsored by the Forum on Law, Culture and Society and the Leitner Center for International Law.