skip to main content
Return to Fordham University
You are at:Home»Inside Fordham»Much to Celebrate as Fordham Sailing Marks Milestones 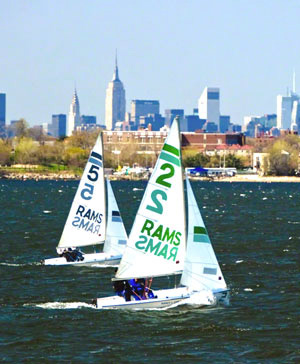 The Fordham University Sailing Association marked the 60th anniversary of its founding and a decade since its rebirth with a dinner on May 7 at the New York Yacht Club in Manhattan.

The 60/10 Anniversary Dinner also celebrated the club team’s success in the 2009-2010 academic year and the completion of a successful fundraising campaign.

“We had the best performance since the team was founded 60 years ago,” said Joseph J. Sullivan Jr. (FCRH ’58), the team’s volunteer head coach and captain of the Fordham sailing team from 1955 to 1957.

“The national sailing coaches poll published in Sailing World magazine ranked Fordham 28th among 211 colleges and universities with varsity or club sailing teams,” he said. “Among the 175 club teams, Fordham was ranked fifth.”

Sullivan, or Joe Sunfish as he is often called by friends, shares the team’s news—from records to updates on the sailing fleet—each Monday via e-mail. It’s this kind of community that has made a family out of the Fordham Sailing Association and Afterguard, a support group made up of sailing alumni, team members and fans.

“Do you know why these people are here?” asked John Kelly (FCRH ’65), a former member of the sailing team and strong supporter. “It’s because Fordham’s sailing team is becoming nationally recognized despite not being varsity or having a professional coach. We’ve done it on the backs of Joe Sunfish and a few other people. They fundraise to send these kids down to Florida for professional coaching and they go out and they perform and they’ve done phenomenally well. It’s great.”

Roughly 170 sailing alumni, students, family and friends attended the dinner, which included a keynote speech by Gary Jobson, president of U.S. Sailing, a salute to the members of the 2009-2010 team, and their induction into the Fordham Afterguard.

A highlight of the evening was the induction of the inaugural class of the Fordham Sailing Hall of Fame. The inaugural class included the four co-founders of the sailing team. They are: Louis T. Piccoli ’52; Richard Russo ’52; John F. Schmitt ’53, who was inducted posthumously; and Jean “Jack” Liegey ’52, who was inducted posthumously. Charles “Bud” McEntee ’72, a team captain, and Katherine G. Murphy ’06, also a team captain, were likewise inducted into the Hall of Fame.

Guests also heard good news about the 60/10 Initiative, a $100,000 fundraising campaign to replace the team’s fleet of boats and upgrade the program.

“We exceeded our goal by 37 percent,” Sullivan said.

Fordham’s sailing team will enjoy 10 new 14-foot 420 sailboats as well as five pre-owned Flying Junior sailboats, which they bought from Columbia University. They will also benefit from a new 19-foot Grady White Race Committee boat. Finally, the team will be able to engage the services of a professional coach, Sullivan said.

“We hope to get someone with a good deal of experience who can take us to the next level,” he said.

“He teaches the young extraordinary lessons of teamwork, discipline and the constant search for excellence,” Father McShane said. “We thank him for bringing sailing back to life at Fordham and for his faith and love for our students.”