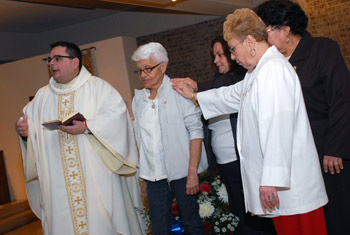 Claudio Burgaleta, S.J., performs an anointing of the sick during Mass at St. Jane Frances de Chantal in the Bronx.
Photo by Ken Levinson

Yet, like all of Fordham’s Jesuits, first and foremost they are Catholic priests. They are ordained to celebrate Mass in any parish in the New York Archdiocese and to administer sacraments that go with the title: marriages, penance, last rites, Holy Eucharist and more.

That is why, when calls for assistance come from surrounding Bronx neighborhoods and beyond, Fordham’s Jesuits are answering them.

Some 20 of Fordham’s Jesuit priests regularly celebrate Mass in parish churches and other religious communities off campus. The jobs are rarely assigned tasks; they are, many of them say, tasks of the heart, and a privilege that keeps them connected to the world beyond the leafy confines of academia.

“We are priests first of all, and this is what our mission is,” said Father Koterski, who celebrates Mass on Tuesday mornings at the Sisters of Life convent in Throgs Neck and on Sunday mornings at the Missionaries of Charity convent on East 145th Street in the Melrose section of the Bronx. “We can be of great support to our fellow priests and to our dioceses. And people in the pews like a little variety in their sermons. The learning and spirituality that the Jesuits bring can be valuable.”

Every now and then, the 60 members of Fordham’s Jesuit communities at Spellman or Loyola halls will run across a new request on their bulletin board. That is how Father Dowling got started celebrating Mass at Holy Cross Parish in Clason Point in the Bronx. The formerly Franciscan parish is set amidst a cluster of housing projects, said Father Dowling, and the clientele are largely lower-middle income and of mixed ethnicity.

“They needed a Spanish Mass five times a week, so that’s where I started,” he said.

While Father Dowling claims he is not fluent, he has been actively celebrating Mass in Spanish “on and off” for 10 years. Currently he celebrates two Masses weekly—one Spanish and one English. He also carries out duties for the Sisters of the Carmelite twice a week.

“I enjoy it to no end,” said the full-time economics professor. “I can do Masses in the morning and classes in the afternoon.”

Just blocks from the Throgs Neck Bridge, the white steeple of St. Jane Frances de Chantal rises as a proud symbol of the immigrant community that helped fortify the parish. Nicholas Lombardi, S.J., associate director of online services for Fordham’s Curran Center for American Catholic Studies, has celebrated Mass at the church for 25 years and has seen the transition from Irish and Italian working class families to Caribbean working class families.

Both Father Koterski and Joseph Lienhard, S.J., professor of theology, have long celebrated Mass for the parish’s convent, the novitiate of the Sisters of Life. And since 2001, Father Burgaleta has been celebrating Mass in Spanish twice monthly or more—depending on the feast or the holiday season at hand.

For Father Burgaleta, who is a native of Cuba, ministering in a Hispanic community with feet planted in the day-to-day world harkens back to his Caribbean upbringing and touches a tender spot. Recently, he administered a Sacrament of Anointing the Sick for “Hilda,” a parishioner who is facing an operation.

Here, in the administering of this sacrament, a special reciprocity between priest and parishioner, he said, can bring the healing power of faith rushing into them both, and into the parish of onlookers as well. To Father Burgaleta, it triggers a connection to his own roots.

“I get far more from the parishioners than I give—and that’s not just a pious cliché,” said Father Burgaleta. “These parishioners really believe in the power of prayer and the power of the sacraments. When I leave the University community, where much of the time we live inside of our heads, it opens up a whole different slice of life.”

Father Lombardi agrees. Besides his work at the Throgs Neck parish, Father Lombardi has for 30 years been a volunteer priest at St. Patrick’s Home for the Aged and Infirm on Van Cortlandt Park South. He has even made spaghetti and meatballs for the staff and Carmelite sisters.

“When you go into another milieu you realize that the things that academics take as very important don’t matter to some people at all,” he said. “To get out and to move among the sick, to do baptisms, to work with the young religious, it all gives you a taste of life from cradle to grave. It keeps you very much alive.”

“They work so hard and live so simply that they appreciate the chance to learn new things,” Father Koterski said.

Just up Fordham Road from the University, on Marion Avenue, is Our Lady of Mercy Parish. For the last six weeks, Mark Mossa, S.J., a newcomer to Fordham’s Jesuit community, has been celebrating Mass every Wednesday and twice a month on the weekend—in two languages. The parish was reduced to just one priest to celebrate all of the Masses—an all-too-common occurrence in today’s Catholic parishes.

“We see what the situation is in parishes today, so it’s good for us to get out there,” he said.

On his blog, “Diary of a Rookie Priest,” Father Mossa makes light of the role of a priest who juggles so many different Masses in different locations that he forgets the nuances of each church. “This forces some improvisations at times,” says Father Mossa. “But you should be able to deal with whatever the challenges. It comes with the job of being a priest.”

All of this community outreach does not mean that the Masses on campus go uncovered. The Jesuits also help cover approximately 24 Masses per week on campus. Father Mossa, in fact, said he is still looking forward to celebrating his first Mass in the University Church.

Celebrating Mass in the communities, however, is an experience few of the Fordham Jesuits would want to do without.