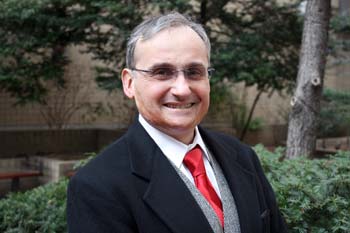 Ian Weinstein, associate dean for clinical and experiential programs, is researching how to craft a legal education that caters to students’ different learning styles.
Photo by Patrick Verel

Ian Weinstein has helped countless law students learn the ins and outs of criminal defense at the Fordham Law Clinic, where students—with the aid of faculty—represent real defendants in real cases.

Now Weinstein, associate dean for clinical and experiential programs and founding director of the Brendan G. Moore Advocacy Center, is examining how students learn to practice law. He is exploring cognitive science expertise literature, which focuses on how people become experts across a wide range of fields and the cognitive processes that lead to it.

Systems intelligence, which is the psychometric idea that intelligence is best understood as comprising several aptitudes, is a major focus. One approach divides intelligence into logical, creative and practical abilities. Another framework uses more categories, including logical, interpersonal, intrapersonal, kinesthetic and musical.

The idea, he said, is to connect fields such as psychometrics to legal education.

Weinstein is also taking a hard look at assessments, which he said might need to be broadened to encourage students to do what teachers want them to do.

All of this is tied to Weinstein’s many years supervising fieldwork at the Fordham Law Clinic, where students work between two and six cases each semester. The cases are not overly complex, but students are given a great deal of responsibility.

“I started out believing as a matter of faith that giving students the opportunity to represent real people in real matters under close supervision with opportunities for reflections was a superior way to educate professionals,” he said. “The first research question I turned my attention to was, ‘Is that really true, and why would we think it’s true?’”

The other major project that Weinstein has undertaken is contributing two chapters to an updated version of Lawyers as Counselors: A Client-Centered Approach (West, 1991). The book, which was first published by David A. Binder, a law professor at UCLA, grew out of Legal Interviewing and Counseling: A Client-Centered Approach (West, 1977), which Binder wrote with psychologist Susan Price.

Weinstein, who was in law school at the time, said it pioneered the idea of “client-centric lawyering” in civil cases, something that he said he will apply to criminal law.

“The idea behind Lawyers as Counselors is that a lawyer’s job is not to force the client into a legal category, but to do our best to force the legal categories to respond to our clients’ needs and goals,” he said. “When they published the first version of the book, it was really pretty provocative stuff.”

Because the vast majority of lawyers today practice civil law, the book, which focuses on interviewing and counseling, has not dealt with criminal law. But Weinstein said it is important to address criminal law because it’s the only kind that involves people who are there against their will, so it presents very different challenges. For starters, he said, what does it mean to respect the autonomy of a person who, more than anything else, wants to be left alone?

“I don’t need to solve the philosophical problem, but I need to figure out a way to offer law students and particularly young lawyers useful advice on how to respect someone’s autonomy and what it means to help them make very difficult choices among bad options.”

That is an example of the practicality that infuses his research, which at one time focused heavily on federal sentencing laws.

“I’m a criminal defense lawyer by practice area, but if you ask me who I am as a law professor, I’ll tell you I’m a clinician,” he said. “I maintain a deep interest in criminal law. I have something to say, but I think the place where I’ve been able to make the most sustained contribution has been in the world of clinical literature.”