skip to main content
Return to Fordham University
You are at:Home»Colleges and Schools»Graduate School of Arts and Sciences»On the Lecture Circuit in China

In China, one Fordham professor’s reputation precedes him.

In May, Stephen R. Grimm, Ph.D., professor of philosophy, embarked on a trip to China to teach and lecture on his area of expertise—the philosophy of understanding. The trip began as a single invitation to be the 2017 Liu Boming Lecturer in the Philosophy Department at Nanjing University. Xingming Hu, Ph.D., Grimm’s former doctoral student and now a faculty member in the department, made the initial recommendation to his department vice chair, who invited Grimm.

As Grimm had made an impression, Hu, GSAS ’15, also contacted his colleagues specializing in epistemology and teaching philosophy at other top universities in China to see if they would be interested in hosting Grimm as well.

As it turned out, they were.

From one lecture, to eight

“They know of Grimm’s work on understanding, so they were interested in inviting him to give a talk at their home departments,” said Hu of his higher education colleagues. 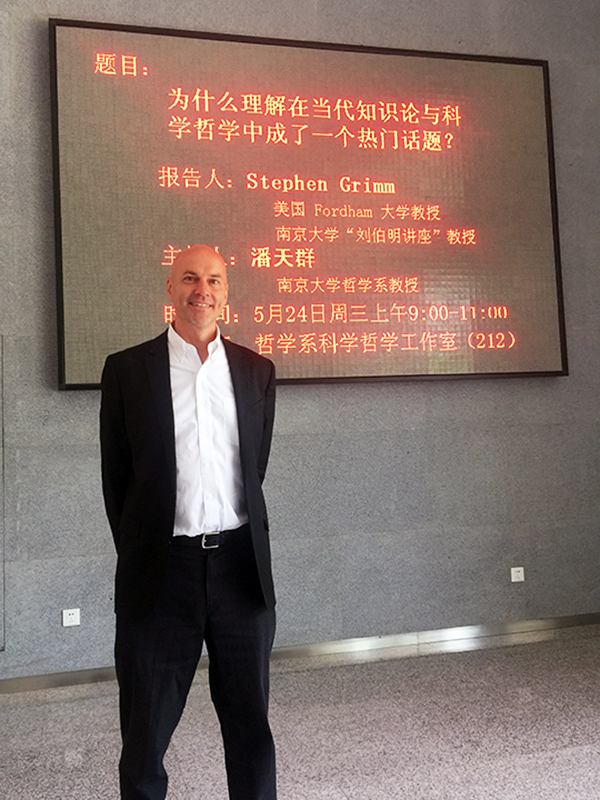 Grimm’s one engagement grew into eight separate lectures, delivered over the course of a three-week period. He also taught six classes in four different cities and five universities, several of which are among China’s “Ivy League,” the C9 League.

Grimm was previously the recipient of a $4.3 million grant that funded a three-year comprehensive study on the nature of human understanding, the largest arts and sciences grant to ever be received by a member of Fordham’s faculty.

Though most of his lectures in China focused on understanding, Grimm also had the opportunity to teach six two-hour classes to a group of 14 undergraduate students at Nanjing. The course, “Philosophy as a Way of Life,” was on a theme that Grimm has previously taught to undergraduates at Fordham.

A curiosity about other cultures

Though the English-language expertise of the Chinese students varied, Grimm said they were “clearly insightful about the material, and had a deep desire to engage with Western philosophy.”

“They were deeply curious to learn about other cultures,” said Grimm. “And very optimistic about the future.” Such optimism, he said, is not as common among 21st-century Americans.

In the end, Grimm said his main takeaways from the trip were both cultural and professional, citing a gained appreciation for Chinese culture and new relationships with Chinese scholars, which he hopes to continue in the future.

“One of my goals is to host an annual conference in New York that will bring together Chinese and American epistemologists, to exchange ideas about our work,” said Grimm. “The Chinese philosophers to whom I suggested this idea were extremely enthusiastic about it, and I am sure I can generate enthusiasm in the idea among U.S. philosophers too.

“Such an exchange would help to put Fordham on the map of Chinese students and professors, which would be a boon to Fordham’s international reputation.”