The all-day summit drew about 250 alumnae, students, faculty, and friends to Fordham Law School for a series of keynote speeches, forums, pep talks, networking breaks, and even a five-minute yoga session. But more than that, it was a chance for them to gather in the same room and discuss something they all had in common: how much Fordham meant to them.

The Power of Philanthropy

One of the first speakers was Gabelli School junior Arnell Stewart, who explained how alumnae donations directly impacted her life. 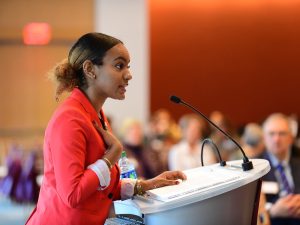 “This was the first good thing to happen to my family since the tragedy,” Stewart said, fighting back tears.

“Because of this blessing and Ms. Seix Dow’s generosity, I can stand here before you today as a member of the Fordham community, but also as one of the strong leading ladies here in this room today.”

How Do You Begin?

Many of the day’s speakers acknowledged that for women, pride in one’s wealth and success—and the power they bring—has not always come naturally.

“Some women feel uncomfortable with the idea of wealth. For men, for generations, it’s been culturally and socially acceptable—generally speaking—to be okay with that idea of, ‘I’m wealthy. I’m rich,’” said Veronica Dagher, GABELLI ’00, ’05, a senior wealth management reporter at The Wall Street Journal and a panelist at the summit. “For women though, in general, that’s been frowned upon.”

So for many, thinking about philanthropy has not been top of mind. But guests gained some insight on how to take their first steps toward giving from the day’s first keynote speaker, Harriet Edelman, GABELLI ’80, Vice Chair of Emigrant Bank—the largest privately held, family-owned-and-run community bank in the nation. Her advice: first pinpoint what you’re passionate about, consider how you want to donate—alone versus with “like-minded souls,” establish a budget, learn how to say no, and research possible organizations through sources like Charity Navigator. 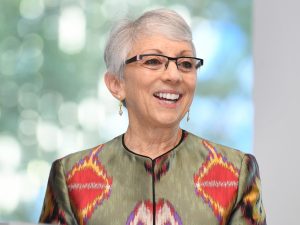 And while she acknowledged that differences between men and women may be part of the day’s discussions, it wasn’t a critical point of focus for her.

“What matters,” Edelman said, “is why you give—why one gives; and, based on the fact that you are here, it means we have a common desire to be intentional and responsible, and share a common interest in the success and sustainability of Fordham.”

Kirsten N. Swinth, Ph.D., associate professor of history and American studies at Fordham, spoke about societal challenges for women in her keynote, “Women Organizing for Change: Feminism’s Forgotten Fight for Work and Family.”

“We are one of two nations in the entire world that does not have [mandatory] paid maternity leave,” Swinth. “Our companion in that status is Papua New Guinea.”

Swinth said that women can take action by joining or creating groups like giving circles, building workplace networks and unions, getting more involved with the government, protesting when necessary, and, perhaps most difficult of all, prioritizing the “collective restructuring of society.” 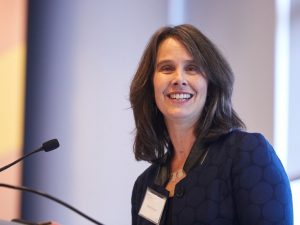 At the keynote panel session Women’s Giving: How Women Accumulate and Distribute Wealth, panelists discussed how women are achieving parity in the United States.

And at Fordham, thousands of women possess potential financial power—perhaps more than we think.

“More than half of Fordham’s living alumni are women,” said Martha K. Hirst, Fordham’s senior vice president, CFO, and treasurer. “Which means together with the women among the University’s friends, faculty, administrators, staff, and other supporters, our collective impact potential on the University we love is boundless.”

Having It All: A Career, Love, Family, and Happiness

One of the day’s most popular panels was Work/Life Balance at Every Stage of Your Life, a forum where women traded stories about how they balance their careers with everything else: motherhood, romance, and “me time.” They acknowledged that women often feel that others have a better handle on the balancing act than they do.

“We live in a day and age where you can constantly be bombarded with the ‘perfect’ [on social media] and somebody else who appears to be doing it better than you’re doing it. You have some sort of imposter syndrome. And why is that? You’re doing so well. You’ve achieved so much so early in your career. Why would you think that that’s not success?” said Beth Savino, GABELLI ’03, a partner in asset management practice at PricewaterhouseCoopers.

Marianne Cooper, FCRH ’77, a managing director at IBM who is a breast cancer survivor and the mother of a child with special needs, noted that priorities shift with age. And, she said, it’s important to take stock of what you will leave behind.

“What do you want to get out of your life?” asked Cooper. “When you go on, hopefully, up to heaven, how do you want to be remembered by your family, friends, and colleagues?”

Alumnae held a candid conversation about the spirituality behind giving at Keeping the Faith: Engaging the Next Generation in Conversations of Spirituality and Service, a panel moderated by Christine Firer Hinze, professor of Christian ethics and director of the Curran Center for American Catholic Studies at Fordham.

“Beyond the huge terrible things that are going on in the world today, there are day-to-day tragedies and heartbreaks. You can feel overwhelmed, like nothing you can do makes a difference,” said Anne Conroy, FCRH ’79, director of development and communications at the Center for Family Representation. “By being involved—whether it’s a faith community, a social justice opportunity, whether it’s giving to nonprofits or volunteering—my experience has been doing those things makes me feel less alone; it gives me a sense of hope and optimism. And as a Christian, I feel more connected to God.” 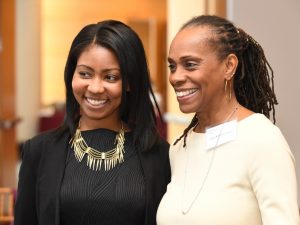 The day’s closing keynote speaker, Anne L. Williams-Isom, FCLC ’86, CEO of Harlem Children’s Zone, talked about meaningful opportunities that giving can provide. She urged all the women in the room to consider how they could help others achieve the American dream. Williams-Isom, the daughter of a single mother from Trinidad and Tobago, acknowledged that it’s difficult—but not impossible.

“I know you guys don’t want to hear about ‘stretching beyond your reach’ because everybody feels like they’re pulled to their limit,” said Williams-Isom, who serves on the University’s President’s Council and works to end generational poverty in Harlem by providing high-quality education and social services to children and families. “I’m here to tell you that you haven’t even begun to touch all the potential that is inside of you.”

Honoring the Past, Looking Toward the Future

Doyle, a retired professor of pediatrics and director of the division of pediatric cardiology at the New York University Medical Center, was a pioneering practitioner of using open-heart surgery to save babies with a rare disorder: “blue baby syndrome.” She and her late husband, Joseph, established two scholarships that benefit pre-health students at Fordham. 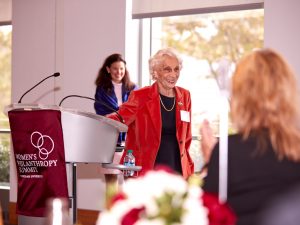 “You have quite literally changed the world, one baby and one student at a time,” Justine Franklin, senior director of development at Fordham, said to Doyle. “And have shown all of us how working for the common good is truly life-giving.”

The second summit also recognized Fordham’s six new giving circles—groups of individuals who donate money to a pooled fund and collectively decide how the money should be spent—that were established at last year’s summit. In just a year, the circles have raised more than $400,000 in Fordham scholarship funds.

“Joining a giving circle is a great first step in the start of your charitable giving journey,” said Susan Conley Salice, FCRH ’82, a University trustee and co-chair of Fordham’s Faith & Hope | The Campaign for Financial Aid. “By raising money as part of a fundraising group, your giving impact is that much more powerful and allows for you to connect with others who share your unique passion for helping Fordham educate more deserving students.”

Last year’s inaugural Women’s Philanthropy Summit raised almost half a million dollars. Donations for this year’s summit are just starting to come in. But perhaps more important than dollar amounts is the question of how to educate the next generation of philanthropists, said one alumna.

“How are we ensuring that the next generation of leaders are being cultivated with a love of community, a heart for justice, and a heart for servant leadership and love of neighbor?” asked Laura Risimini, FCLC ’10, GSAS ’13, foundation manager of the Sister Fund. “And what are we doing to make sure that the next generation—which is going to be taking the reins of leadership soon in the next couple of decades—is prepared?

“Our future literally depends on it.”

Complete bios of all speakers, panelists, and honorees can be found here.