skip to main content
Return to Fordham University
You are at:Home»Inside Fordham»Lectures and Events»Women Celebrate Self-Empowerment and Giving Back
Photos by Argenis Apolinario and Chris Taggart
Give to the things you love.

That was the central message of the third annual Women’s Philanthropy Summit on Oct. 23, held at Fordham Law School.

“This year, we developed a theme that represents today’s overall message and program: transforming today, safeguarding tomorrow. From our families to our communities, from our workplaces to our world, women’s philanthropy creates positive change and preserves the things we love,” said Martha K. Hirst, senior vice president, CFO, and treasurer of Fordham, in her welcome address.

In attendance were nearly 250 alumnae, students, faculty, and friends of Fordham. Throughout the day, they listened to keynote speeches and panels led by women at the top of their fields, from presidents and CEOs to a mother-daughter doctor duo.

Attendees shared stories about their lives and the things they learned, including the importance of giving credit where it’s due. They networked and mingled over lunch. They decompressed while watching a digital sunset through headsets provided by the Glimpse Group, a virtual and augmented reality platform. But above all, the women celebrated the ways philanthropy has transformed people’s lives.

“Right now, it’s not only a fact that 50% of our alumnae are women,” said Joseph M. McShane, S.J., president of Fordham, addressing guests in the Costantino Room. “More than 50% of our students are women. So Fordham is now a majority women’s institution, and therefore, we are especially grateful and honored that you are here.”

Rose Marie Bravo: From the Bronx to Buckingham Palace 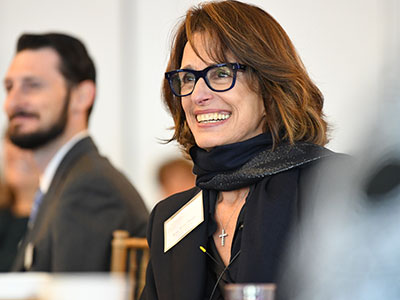 The first keynote speaker was Rose Marie Bravo, a fashion industry icon whose past positions include CEO of Burberry and president of Saks Fifth Avenue. In recognition of her contributions to British fashion, Bravo was named a Commander of the British Empire by Queen Elizabeth II in June 2006.

At the summit, she spoke about how she helped revive the iconic Burberry brand, known for its raincoats and distinct tartan plaid, and met fashion giants like Anna Wintour and Karl Lagerfeld. She gave advice on how to be a good boss (communicate your vision clearly and be kind to everyone) and emphasized the importance of escaping your comfort zone to expand your career. But the focus of her speech was on what inspired her to give back to her community.

“It all began in the Bronx,” Bravo said. “It began with my parents … this idea of giving back.”

Decades later, she gave back to the schools that had shaped her early life. At Fordham, she established the Biagio and Anna Lapila Endowed Scholarship Fund in honor of her parents and the Rose Marie Bravo Endowed Scholarship for students studying theology or a related field.

In a fireside chat with Justine Franklin, senior director of development for major gifts, the conversation took a more personal turn.

“I was diagnosed three years ago with a very rare ovarian cancer … I had surgeries, I had chemo, I went through the whole thing,” Bravo said. “But it taught me a lot.”

“How do you touch people, in a way that’s special? And being able to say, thank you, God … [So that] when our time comes, we’re going to be ready to go on that journey,” she said, in a speech that ended with a standing ovation.

At every juncture of Valerie Rainford’s life, Fordham has played a central role.

“I feel like at every turn, Fordham has been there pouring into me, which is why I’m committed to pouring back in,” said Rainford, FCRH ’86, head of advancing black leaders and diversity advancement strategies at JPMorgan Chase and Fordham trustee. 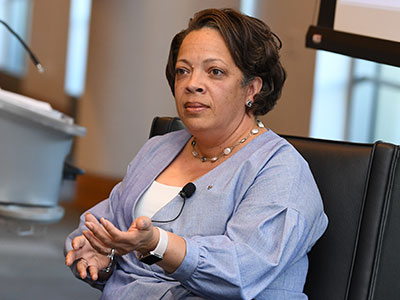 When Rainford was a sophomore, her mother committed suicide and she dropped out of school. However, a few staff members in the Graduate School of Business, where Rainford was doing work-study at the time, refused to let her go. Rainford returned after six months.

“It doesn’t really matter how many times I walk up that hill from the bus stop. I get tears in my eyes and goosebumps that here’s this kid who dropped out of Fordham and who almost didn’t come back, and now I sit on the board of [trustees]—it’s pretty crazy,” she said in her keynote speech.

Rainford said Fordham gave her confidence to go on after she lost her mother and helped her get her first job at the Federal Reserve.

“I got my first job through career planning and services,” she said. “I got my second job through a Fordham alum, who I met at an event outside of Fordham. There was a time I was thinking about leaving JPMorgan, by the way—it was a Fordham alum who convinced me to stay.”

Rainford emphasized that even those who don’t have the ability to make large donations can still give their time.

“For a kid like me, who grew up like me with nothing, 10 dollars matters,” she said. “For anybody to sit here and say they don’t have enough to give … everybody has something to give.”

Nazario, a mathematics major who works four jobs, received the Clare Boothe Luce Scholarship through Fordham during her sophomore year. It helped her work toward her goal: becoming a mathematics teacher.

“It is important that we keep future Fordham women educated and supported through scholarships so other young women like myself can have similar accomplishments and confidence in their future careers,” she said.

Many women experience “imposter syndrome”: the struggle to embrace their success because they feel like they don’t belong. 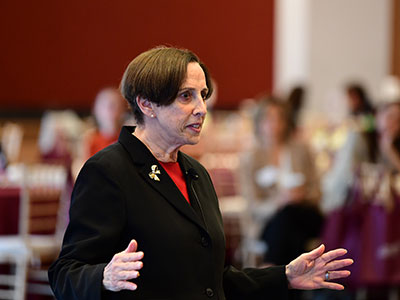 “You have made some terrific accomplishments … but you persistently think that you’re not bright and you’ve fooled others,” explained Toby Tetenbaum, Ph.D., a professor of educational leadership, administration, and policy at Fordham’s Graduate School of Education, in an afternoon workshop. “It leaves you with this crippling sense of self-doubt.”

Much of the syndrome’s roots lie in how women are raised and taught to conform to “societal ideals,” Tetenbaum said. Women are taught to be humble and modest while attributing their successes to luck instead of hard work and accomplishments.

“Women have a really hard time self-promoting,” she said. “No one wants to be seen as a braggart.”

She encouraged women to fight the syndrome by being clear about their goals, asking for feedback to help better themselves, and identifying their strengths.

Celebrate What Makes You Unique

In the workshop “Guide Your Career (Not the Other Way Around),” guests learned how to bring their unique talents to the table. 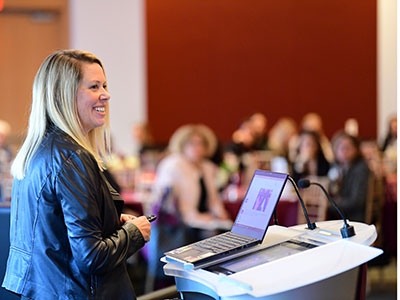 “Our brand is who we are and what we bring that might be unique and different, and what’s important about us,” said one of the presenters, Megan Taylor, senior director of employee experience at Adobe Inc. “It’s our key differentiator.”

To begin building your brand, it’s important to do five things, Taylor said: understand yourself, offer a distinct value, identify how you’ll get that information out there, network and market yourself, and re-evaluate your brand as you change and grow.

Your personal network is also important in guiding your career, she said. A good way to keep track of all your connections is to physically map them out, said Taylor. Annette McLaughlin, director of Fordham’s office of career services, agreed.

“You’re at the center of the circle. And then put all the circles and activities that you’re involved in—your volunteer [service], your work, your friends, your exercise, your gym—and look at all the people that are in those networks,” McLaughlin said.

The Struggle to Embrace Our True Selves

Six women recounted their professional and personal obstacles in the afternoon panel “A View From the Top: Reflections on Success and Coaching the Next Generation of Women Leaders.”

Elizabeth Zeigler, GSE ’00, president and CEO of Graham-Pelton Consulting, started working at the firm as a 32-year-old part-time employee and a new mom. The male CEO, at the time, was wary about assigning her on a project because of her gender.

She confronted him. More than a decade after their conversation, she became president and CEO of their company. (And she mended fences with the old CEO, who became a mentor.)

Panelists also discussed the struggle to stay authentic to their true selves while countering negative stereotypes. 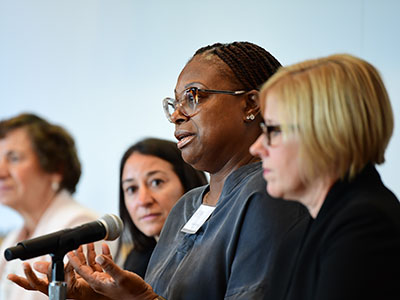 “If we are compassionate or supportive, then we’re weak … For black women, if something is not going right and I’m about to tell somebody, ‘You need to do this,’ then you have a chip on your shoulder,” said Valerie White, FCRH ’83, LAW ’96, an executive vice president at the Empire State Development Corporation.

White said she used to be the only black woman managing director at her old Wall Street firm.

“I had braids … It was a big issue because I traveled all over the country. If I were in New York or New Jersey, it might be OK. When I was in Oklahoma or Arizona, someplace, there was always this look—‘I’m not sure if she’s going to be able to do a credit analysis,’” White said.

“Unfortunately, that’s kind of how we have to gauge the environment that we’re in. But we’re women—we know how to do that, right?” she said, to affirmative “mmm-hmms” across the room.

The Influence of Jesuit Education

In the afternoon Values-Based Leadership session, Joan Cavanagh, Ph.D., director of campus ministry for spiritual and pastoral ministries at Fordham, moderated a panel of three women of faith whose bold decisions led them to leadership roles in service of others. Each of them had a life-changing moment to look back on.

Debbie Santalesa, GABELLI ’91, global lead for emergency preparedness and planning for CARE International, was in a car accident early in her accounting career that almost took her life.

“That was the beginning of where I became who I was supposed to be,” she said. She soon began a career in humanitarian work that brought her to the Middle East, Europe, Asia, and Africa.

Santalesa said she didn’t realize it until later, but the theology and philosophy classes she took at Fordham impressed upon her the importance of giving back to the community.

“When you feel that something needs to be changed,” she said, “that’s God calling you.”

‘A Life of Meaning’

The previous two summits have raised nearly $540,000 for Fordham. Many of the funds were achieved through Fordham’s giving circles—groups of individuals who donate money to a pooled fund. Last year, there were 16 circles; this year, there are three new ones: career services, higher education opportunity program giving, and living the mission.

They were honored for their service, which Father McShane said is something essential for a life well spent:

“A life of meaning must always include service of others—service and causes that are greater than ourselves.”

Next year’s Women’s Philanthropy Summit will be held on Wednesday, Oct. 21, 2020.

Complete bios of all of this year’s speakers, panelists, and honorees can be found here. 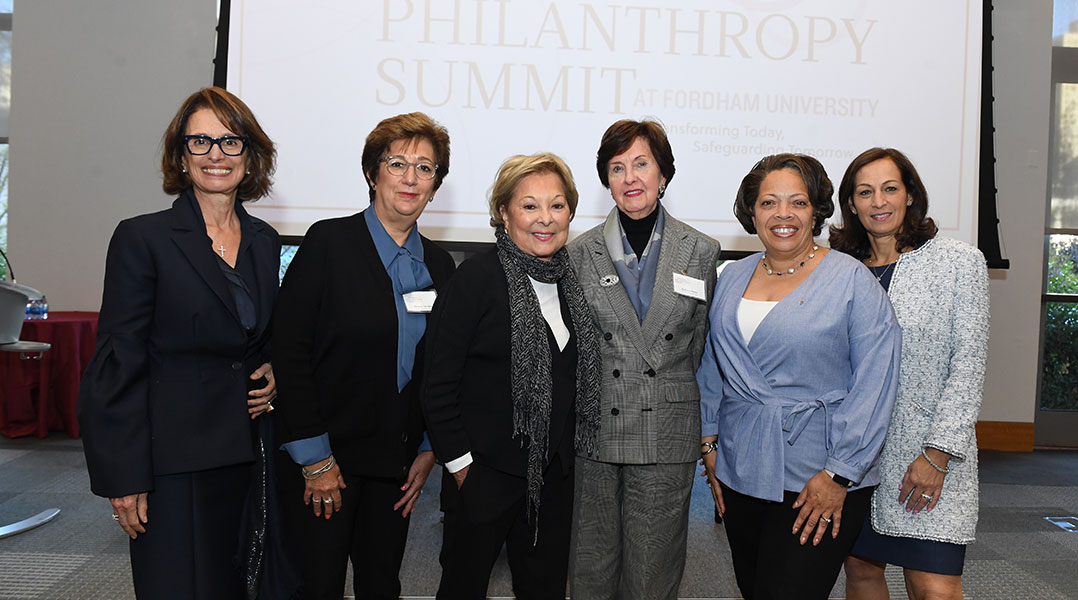 Recipients of the Pioneering Women in Philanthropy Award