Now all it needs is a home.

With help from two of the University’s most generous donors, the center is well on its way to getting just that—a dedicated space at the Rose Hill campus, designed around the heritage and iconography of Orthodox Christianity, that acts as a leaven for new academic opportunities and student engagement.

The center has been mainly about research and publications since its founding 10 years ago, said George Demacopoulos, Ph.D., the Father John Meyendorff & Patterson Family Chair of Orthodox Christian Studies and one of the center’s two founding directors. However, with this new multipurpose facility, “for the first time we’re really going to be able to focus on the undergraduate students themselves” by providing spaces for informal gatherings as well as events that enrich their education, he said.

He and the other founding director, Aristotle Papanikolaou, Ph.D., the Archbishop Demetrios Chair in Orthodox Theology and Culture, are based at the Rose Hill and Lincoln Center campuses, respectively, and the center has held events in various places at both campuses.

The center will hold all but its biggest events in its new dedicated facility, Demacopoulos said. Located in the 1,500-square-foot space in the basement of Loyola Hall, it will include offices, a conference room, a gathering area, and a small chapel with specially commissioned icons, as well as shelves for hundreds of donated volumes now sitting in boxes. Demacopoulos estimated that construction and renovation of the space could begin in late 2023, putting the center on path to a more rooted existence and doing away with constant searches for event spaces around the University.

The new facility will be a familiar place where students gather for study groups or stop in at the chapel for some quiet reflection. Academic experts and clergy will come for webinars, panel discussions, and other events that illuminate questions of Orthodoxy in the modern world. “It’s going to really be this multipurpose space that is focused on the Jesuit model of integrating learning with faith with service and so forth,” Demacopoulos said.

Housed within a Jesuit university, the Orthodox Christian Studies Center is uniquely positioned to help heal the rift between the Catholic and Orthodox churches—something that was especially appealing to the benefactors who are funding half of the new facility’s cost.

William S. Stavropoulos, PHA ’61, and his wife, Linda Stavropoulos, have been giving back to Fordham for years, funding scholarships, athletics, and the renovation of Hughes Hall to house the Gabelli School of Business on the Rose Hill campus. 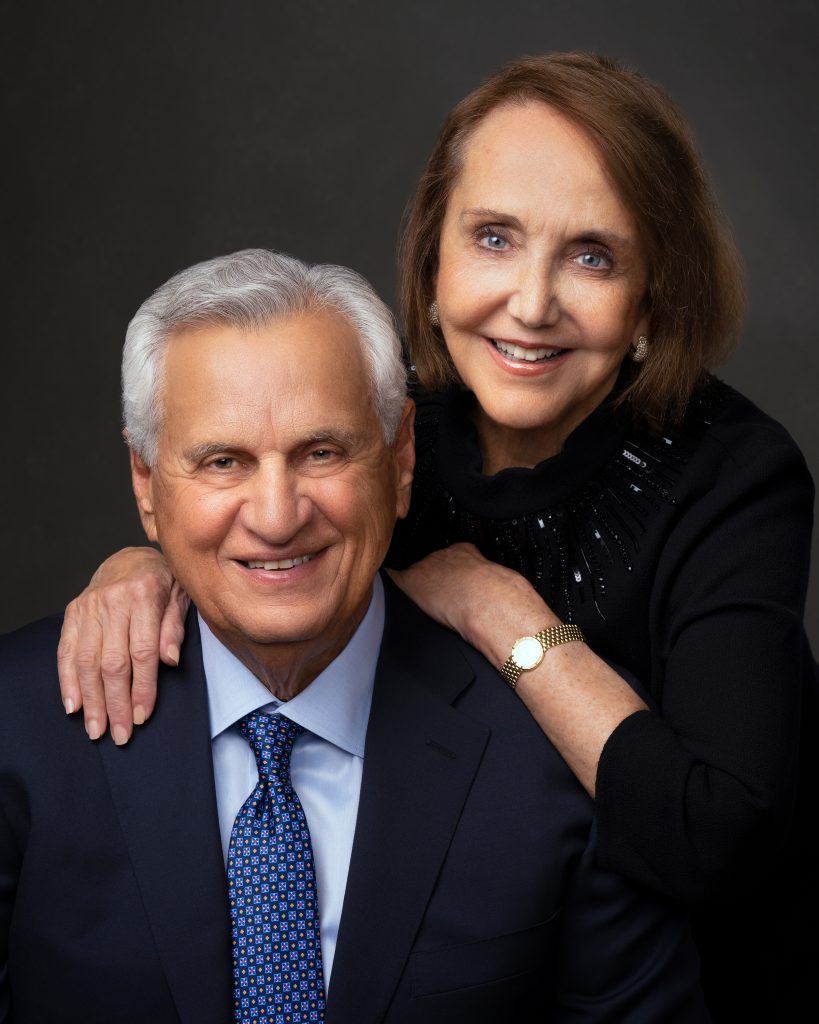 Today, in recognition of the “unbelievable great job” Father McShane did as president of the University, they are making a major gift toward the completion of the Joseph M. McShane, S.J. Campus Center, a key part of the University’s $350 million fundraising campaign, Cura Personalis | For Every Fordham Student. As part of that gift, they are also setting aside $250,000 for the construction of the Orthodox Christian Studies Center’s new home.

Their giving is rooted in William Stavropoulos’ Fordham experience, which was, in his words, “a game changer.”

“When I entered the University, coming from a rural high school with a graduating class of 15, I was not sure that I could measure up. I had real doubts in my mind that I could really make it,” he said in accepting the Fordham Founder’s Award in 2014. “But with Fordham’s incredible spirit and culture, they instilled into me a confidence and an education that truly transformed me.”

Professors took a personal interest in him, encouraging him to attend graduate school, he said in an interview. After graduating from Fordham’s College of Pharmacy (which has since closed) in 1961, he earned a doctorate in medicinal chemistry from the University of Washington and went to work at Dow Chemical as a research chemist. He retired from the company 39 years later—as chairman and CEO. He won several awards along the way, including one from the Society of the Chemical Industry recognizing the high ethical standards be brought to that industry.

Through their family foundation, he and Linda Stavropoulos have supported a range of efforts in health care, human services, and higher education—including Fordham’s Orthodox Christian Studies Center, in part because of its efforts to help bridge a centuries-old divide.

Christianity split into the Roman Catholic and Greek Orthodox churches nearly a millennium ago, in 1054, due to religious disputes and political conflicts. There have been many steps toward rapprochement between the estranged eastern and western churches—in 1964, Ecumenical Patriarch Athenagoras and Pope Paul VI met in the Holy Land for joint prayer, the first time the two churches’ leaders had met in more than 500 years. A year later, they agreed to revoke the churches’ mutual excommunication decrees dating from 1054.

In 2014, Pope Francis and Ecumenical Patriarch Bartholomew met for a service in Jerusalem to celebrate the meeting’s 50th anniversary; in a homily, the latter called for shedding “fear of the other, fear of the different, fear of the adherent of another faith, another religion, or another confession.”

Among the attendees were William and Linda Stavropoulos, who went with a group organized by the Greek Orthodox Archdiocese of America. “It was very moving, and encouraging, that the symbolism of that [meeting]could expand to something on a more tangible, everyday basis,” Linda Stavropoulos said.

The Orthodox Christian Studies Center promotes this cause through scholarship and events such as the Patterson Triennial Conference on Christian Unity. “I think these are times where we need that unity,” William Stavropoulos said. “It seems like we’re having polarization like I’ve never seen before in my lifetime, and I think this is one area where maybe we can get together. I think we’re better united than divided.”

As members of the Greek Orthodox church, he said, he and Linda Stavropoulos have “a natural affinity” for the Orthodox Christian Studies Center and believe in the work it’s doing. In 2014, they made a gift to help the center secure a National Endowment for the Humanities challenge grant in support of dissertation fellowships.

This will be the first dedicated physical space the center has ever had, Demacopoulos said. Its large common area will enable informal gatherings by students who are pursuing the Orthodox Christian studies minor or who belong to the Fordham chapter of the Orthodox Christian Fellowship, a nationwide student organization.

“The center is not just theology; it’s the whole history, thought, and culture of the Orthodox Christian world, broadly understood,” Demacopoulos said.

By generating new interest in the Orthodox Christian Studies Center, the facility could prompt more faculty members to develop courses that fit the minor and create more opportunities for students to understand Orthodoxy across disciplines, he said.

The new facility is a key priority of the center’s current $5 million 10th Anniversary Campaign: Engaging Orthodoxy, along with creating a research endowment for Orthodox Christian studies at Fordham.

To inquire about supporting the Orthodox Christian Studies Center or another area of the University, please contact Michael Boyd, senior associate vice president for development and university relations, at 212-636-6525 or [email protected]. Learn more about Cura Personalis | For Every Fordham Student, a campaign to reinvest in every aspect of the Fordham student experience.