skip to main content
Return to Fordham University
You are at:Home»University News»Will It Take Another 9/11 to Wake Us Up?
Michael Sulick, Jeffrey Tricoli, Giampiero Massolo (Photos by Chris Taggart)
“To get the attention [on cybersecurity], something catastrophic has to happen,” said retired General John M. Keane, GABELLI ’66.

Keane, president of GSI Consulting and a four-star-general, made the remarks at a panel discussion alongside Giampiero Massolo, CEO of Fincantieri, S.P.A, and Jeffrey A. Tricoli, section chief at the FBI’s Cyber Division in Washington D.C.

Moderator Michael J. Sulick, former director of the National Clandestine Service at the CIA, said that it took 9/11 for a lot of the walls to fall between U.S. and other foreign intelligence agencies. He also mentioned the intense rivalries between the FBI and CIA and even within the agencies themselves, where different divisions ate in different cafeterias. 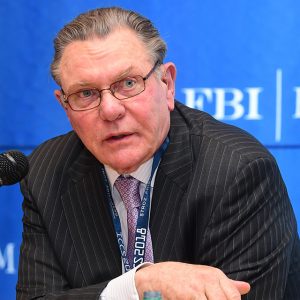 Keane said he’s certain that the nation is not prepared, should another high-level disaster hit.

“We are woefully inadequate,” he said.

Keane said that the days of launching a Desert Storm-type invasion are likely over, because cyberattacks could hack communications systems before a military plane even got off the ground.

“The degree that cyber is impacting military operations is very dramatic,” he said.

Cyber warfare has altered the balance of power between states, creating an ambiguity in trying to measure and influence potential adversaries, said Massolo.

“In a way, we need to counter the threat before even understanding it,” he said.

Massolo said intelligence agencies need to reinvent the cycle in which they operate. Before, it was limited to preventing, preempting, and disrupting. A more progressive approach is now being taken, especially in Europe.

“We usually consider the Americans more sensitive to security than us,” he said. “We [have been]more about guarantees. But cyber is one of those factors that has two sides to the fabric.”

He added that not all the answers can be solved with big-data gathering; target selectivity can just as effective in cyber wars.

“One stone is enough,” he said. “Hit the giant in the right places; you don’t have to cover him.”

A former ambassador to the Ministry of Foreign Affairs, Massolo noted that Italy’s success at defeating domestic terrorism. It required a “whole country approach” where regional differences were set aside.

“We need to overcome the sense of ‘otherism’ that dominates our society, not just in governments but also in companies and the media,” he said.

“There are basic tenets of journalism you should follow,” said Tricoli. “Not everybody who has a keyboard and pen follows them because it’s a different environment today.”

“But we still need to be educated as consumers, and that’s what we’re really trying to say. How [the media]is sourced, and where its coming from, that’s important.”