skip to main content
Return to Fordham University
You are at:Home»University News»Where I Was on November 22, 1963 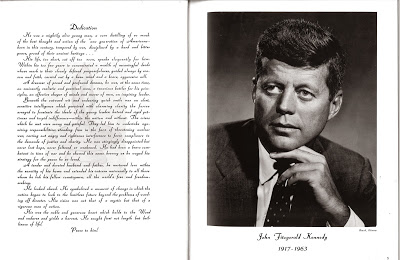 David Zelaya, UGE ’64, was in a theology class at Fordham’s 302 Broadway campus when he learned that President Kennedy had been shot. Fifty years later, after reading “The Kennedy Legacy,” an interview with Michael Latham, Ph.D., dean of Fordham College at Rose Hill, Zelaya composed the following reminiscence. “For me,” he wrote by way of introduction, “the names of the 35th president of the United States and that of my beloved alma mater will be forever linked.”

In the mid- to late 1950s, my parents, my sister, and I fell under the spell of the Kennedy family. Like legions of our coreligionists across the country, we were proud of the prominent, attractive Catholic couple: the charismatic John F. Kennedy, his charming wife, Jacquelyn, and their lovely children, Caroline and John-John. We were beguiled by the young senator’s winning personality, his erudition, his oratorical skills, and his war hero status. We followed his career as senator, published author, presidential candidate, and commander in chief, and we regularly watched his televised press conferences—many of which my sister taped on a reel-to-reel tape recorder. To this day, I can recite from memory lengthy snippets of his famous inaugural address.

True, in later years we would learn of the man’s flawed character, of his illnesses, of his reliance on steroids, painkillers, and stimulants, and of his often risky behavior. In our innocence, however, for the all-too-brief “Camelot” period, we basked in the sunshine of President Kennedy’s radiant smile. He was a hero to millions at home and abroad.

I was a Fordham senior in the fall of 1963, and almost all of my classes were taken at 302 Broadway. That year, the renowned Father Ralph Tapia had designated me as the “beadle” of his theology class. One of my responsibilities in that capacity was to lead the class in prayer at the beginning of each session. So it was that just before 2 p.m. on Friday, November 22, 1963, I entered the classroom to find my distraught classmates nervously mulling over rumors that the president had been shot. It was the first I had heard of it. I mounted the podium and led the class in a Hail Mary “for a special intention.” Once the students were seated, an ashen, visibly shaken Father Tapia entered the room, said a few words to comfort us, informed us that he had no reliable information to pass along, and promptly dismissed the class.

The subway ride home was an eerie experience. The car I was in was crowded but no one spoke. The only sounds to be heard were the screeching of the wheels and the squeaks of the cabin. Some people had glazed looks in their eyes while others were openly weeping. It was during the hour I spent on my way home that the president was officially declared dead.

Once home, I joined my disconsolate family. We embraced, tried to comfort each other and tried to hold back tears. Like millions of Americans, we were glued to the television for three consecutive days. As if the events of that awful Friday were not enough, we returned home from Mass on Sunday to learn—and to see videotape—of Jack Ruby walking up to Lee Harvey Oswald in a Dallas police station and shooting the president’s assassin in full view of police and other law enforcement personnel. That three-day period has been described by CBS’ Face the Nation moderator Bob Schieffer as “the weekend we lost our innocence.” Others have declared that the events of that awful period marked the end of the 1950s and the beginning of the tumultuous ’60s.