For six WFUV Sports reporters, that’s just a snapshot of what their Super Bowl week looked like.

“I’m really proud of the hard work the six of us put in for this week—a lot of prep and a lot of research,” senior Charles Maisano said.

WFUV Sports Director Bobby Ciafardini said sending six students to cover the week was one of their largest groups ever.

“Their hard work and dedication to not only producing impactful content, but also working diligently to extract every last ounce out of the experience, speaks volumes about each of the six themselves, as well as the type of students both WFUV and Fordham produce year in, year out,” he said.

“I think it was 34 interviews in total,” Leverty said. “We had a lot of work to do. Essentially we would get to Radio Row [the media center for Super Bowl week]—we had the same table every day—and we would just put ourselves out there.”

Leverty said two interviews really stuck out to her—one with Ian Rapoport, a national breaking news reporter for the NFL Network, and one with Quinnen Williams, a defensive lineman for the New York Jets. Being able to get Rapoport, a huge name in the media industry, was one of their highest profile guests of the week, while Williams helped them connect with their New York audience, she said.

For Capone, the most memorable experience was interviewing a former high school classmate, Jason Cabinda, who now plays linebacker for the Detroit Lions.

“He was there doing something for the NFL and their player engagement—he was interviewing players as well. We got a chance to talk to him, and it was one of our best interviews,” Capone said.

Off the Ground and onto the Airwaves

Each of the students had their own role in helping to get their coverage off the ground and onto the airwaves—both on 90.7 FM for the Saturday show and streaming online throughout the week. Maisano, Capone, and Clementi hosted the daily sports-talk shows, Leverty and Houdek worked primarily on production, and Tsagaris handled video duties.

WFUV Sports students covered all aspects of the Super Bowl, including the game itself.

The students were one of about five college radio teams that had tables at Radio Row. But to simply call WFUV a college station would be a misnomer. The NPR-affiliate is based at the Rose Hill campus, but includes full-time, professional staff members including on-air DJs, a news director, and a sports director. Students have the opportunity to train and then do on- and off-the-air work in a variety of departments, including news and sports.

Three of the six students—Maisano, Capone, and Clementi—went down early in the week to attend Media Day. And Maisano and Leverty attended the Super Bowl game as credentialed members of the media, an opportunity few college students get to do.

Leverty said that the opportunity to cover the biggest sporting event of the year as a college student really made an impact on her.

“It’s kind of your first real job in the media and I’m doing things that most full-grown media members and adults don’t get to do until they’re very well established,” she said.

For Maisano, this was his second time being around the leadup to the Super Bowl, but his first time actually experiencing the game itself.

“I went as a sophomore to Minnesota [with WFUV],” he said. “I was a producer as a sophomore, so being able to host and talk to these great people [now as a senior]  was unbelievable. As a 21-year-old, checking that off my bucket list, doing it in college, was just incredible.”

“Being looked as a professional in college is just incredible,” he said.

WFUV sent six students to the Super Bowl this year.

Capone said the experience gave him a chance to work alongside many of the industry leaders he grew up idolizing.

“Just being able to be there with the professionals in the industry—you’re set up next to affiliates from San Francisco and Kansas City and then you have SiriusXM where you look over and Chris ‘MadDog’ Russo is doing a show, Adam Schien is doing his show, and you get to talk to these people and it’s not like you’re below them, you’re on their level,” he said.

The students said WFUV Sports is also helping them prepare for their future careers. 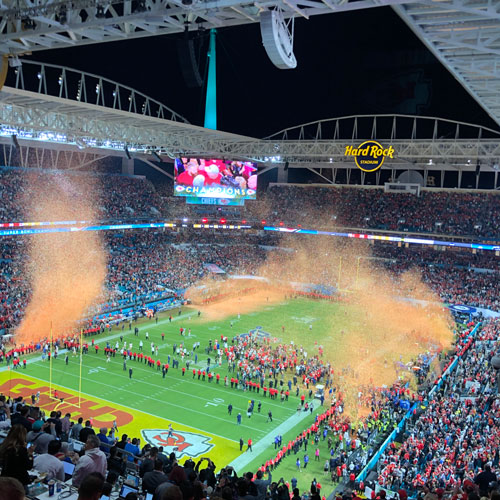 The view from WFUV Sports’ seats at Super Bowl LIV after the Kansas City Chiefs won and confetti rained down on the field.

“I came into Fordham thinking I wanted to do play-by-play and be the next Mike Breen, but I tried it out and it wasn’t for me,” Maisano said. “I leaned toward the production aspect and I found my niche there.”

He credited Bob Ahrens, WFUV’s former sports director, and Ciafardini, with helping him find his calling. Because of their help, Maisano has already interned at SiriusXM, CBS Sports, and Westwood One radio.

“Without WFUV, I never would have been able to get all these internships,” he said.