skip to main content
Return to Fordham University
You are at:Home»Inside Fordham»WFUV Honored for Strike A Chord Campaign
WFUV, 90.7, Fordham’s 50,000-watt, non-commercial radio station, was honored on June 27 for its “Strike A Chord” campaign, a PSA campaign that focuses every quarter on issues such as affordable housing, job training, music education, senior services, and parks.
Members of the station were honored by the Coalition of Behavioral Health Agencies, Inc., an advocacy organization for New York’s behavioral health community, at the groups’ 2013 Leadership Awards Reception at the Pfizer World Headquarters in Midtown Manhattan.
The station was honored for sponsoring programs aimed to de-stigmatize mental illness and addiction disorders, thereby encouraging individuals to seek treatment. The spring 2013 Strike A Chord campaign was dedicated to mental health stereotypes.
Previous winners have included Mike Wallace of CBS News and Dr. Oliver Sacks.
“I am enormously proud of the work we do in our newsroom to keep our listeners informed and enlightened about the world around them,” said Strike A Chord producer George Bodarky.
“It is always a thrill when that work is recognized. As always, I tip my hat to the hard work and dedication of the WFUV news and staffs,” 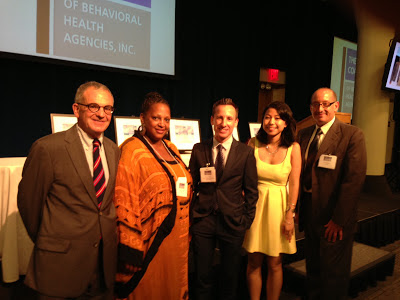