skip to main content
Return to Fordham University
You are at:Home»Fordham Magazine»Fordham's New York»Volunteers Reflect as Fordham EMS Celebrates 40 Years
FUEMS volunteers participating in a bonding exercise in spring 2016. Photo by Matthew Modzelewski
The first time John Grasso, GABELLI ’99, rode in a Fordham University EMS ambulance was when he was carried off the football field, injured during a game. That ride would turn out to be the first of many he’d make—not as a patient, but as a member of the University’s student-run emergency response team.

Grasso says he was so impressed by his fellow students’ quick and professional response to his health crisis that he applied to join the Fordham EMS team—known as FUEMS—as soon as he recovered. And the life experience he gained as an EMT was an education that was just as meaningful as his studies in business and law.

“I saw everything from cuts and bruises to seizures and heart attacks,” he recalls. “And as an officer, I was able to get perspective on the overall operation.”

Rising up the ranks, he was elected director of the club, a position that prepared him for his future career: Today, Grasso owns an ambulance company and emergency vehicle repair service in the Bronx, just steps from the campus where it all began.

Reminiscing about stories like this made for lively conversations at the FUEMS’ April 1 gathering at the Villa Barone Manor in the Bronx to commemorate the club’s 40th anniversary. More than 120 students and alumni attended to celebrate the club’s evolution over four decades.

From humble beginnings to city resource

What began with a handful of students who saw the need for an on-campus emergency response service in the 1970s and ’80s has flourished into a student corps of more than 200 members, 12 officers, and two state-certified ambulances, with collaborative partnerships with emergency service groups throughout New York City. 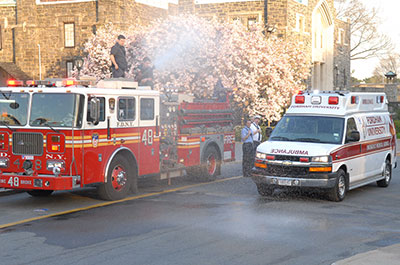 The FDNY “wets down” a Fordham ambulance on FUEMS’ 30th anniversary in 2007, a show of respect from the city’s emergency services. Photo courtesy of Bruce Nedelka

One of the club’s original pioneers, Bruce Nedelka, GABELLI ’79, is now a certified emergency medical services officer, a title held by just over 100 nationwide, and a nationally registered paramedic and division chief and public information officer of the City of Virginia Beach.

“We started out on foot with fanny packs and basic equipment,” he says. “I never imagined back then that FUEMS would someday serve as backup to the city and the Bronx 911. That gives me a great feeling.”

Those early efforts were followed by a few like-minded students, including Bill White and Dave Winters, both FCRH ’89, who were instrumental in formalizing the student club and purchasing its first ambulance.

“We’re very proud of it, but it’s not about us,” White says. “It’s about the young men and women who are waking up at 3 a.m. to help people in crises and who are continuing the Fordham tradition of service for others.”

Over the years, FUEMS has been an integral part of the city’s emergency response efforts—from the daily calls to big disasters. FUEMS was among the emergency crews that responded to the World Trade Center during 9/11. “They went down and waited for survivors, but there weren’t any,” recalls Kathleen Malara, MSN, FNP, of Fordham’s Student Health Center, who serves as a FUEMS adviser. “It was very traumatic for the students.”

More recently, the student EMTs participated in the funeral procession for a Yadira Arroyo, a veteran FDNY EMT in the Bronx who was killed on the job in March.

“This hit our organization hard, as a few of our members talked to Yadira at St. Barnabas during late-night shifts,” says Natalie Sturgeon, the club’s outgoing director, who plans to attend medical school to become a trauma surgeon. 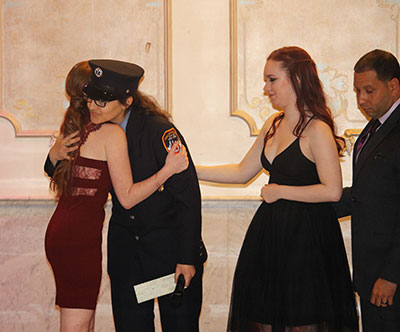 In the spirit of fellowship for their fallen colleague, FUEMS and Emergency Aid Training—the group that provides FUEMS EMT instruction—announced their donation to a fund for Arroyo’s five children at the anniversary celebration, a gesture that was met with a standing ovation when the gift was accepted by an FDNY union official.

Father Gregory Rannazzisi, FCRH ’05, a former FUEMS volunteer, gave a blessing at the dinner and asked for a moment of silence for the late Father Joseph Currie, S.J., former FUEMS chaplain.

Many student EMTs join the club to gain state certification and hands-on experience for future careers in the health professions. Training is intense and includes a semester-long course, with classes held at night and on the weekends, and exams that lead to New York state certification. With an influx of volunteers over the past two years, students commit to two shifts each month, but can request more.

The reward of doing work that saves lives attracted Matthew Niehaus, FCRH ’09, to become a FUEMS volunteer while he was a pre-med student at Fordham. Today, the Cleveland native is completing a medical residency in Philadelphia, and he will continue on to a critical care fellowship in Pittsburg.

“The experiences I had definitely led me to emergency medicine,” Niehaus says. “I remember one case in particular when a visitor fell off of a roof on campus. There was a very collaborative effort between the students who responded, and we got the patient to the hospital. Calls like that got me interested in working in trauma.”

Mickaela O’Neill, FCRH ’15, felt she was destined for a career in the medical field when she arrived at Fordham, but after four years with FUEMS she shifted gears from becoming a doctor to becoming a physician assistant so she could spend more time with patients.

Now in graduate school at Midwestern University in Arizona, O’Neill adds that even compared to other EMS teams she’s served with, the friends she made at FUEMS were more like family.

“Helping other students along with students your own age was extremely unique. It wasn’t easy juggling FUEMS with being a pre-med student. You have to be committed and make sacrifices in your social life, but I wouldn’t change it for the world.”

Unlike O’Neill, current FUEMS chief Heather Cahill wasn’t necessarily planning on a career in medicine when she arrived at Fordham. She was a dancer in high school and considering a career in the performing arts. But the Fordham College at Rose Hill junior—just elected for her second year as chief—has decided on a career in forensic science. Responding to campus calls ranging from diabetic emergencies to anaphylactic shock to sports injuries, seizures, and fevers helped confirmed her career path.

“Some situations can be very scary and life threatening,” Cahill says. “But making a difference in someone’s life, even sometimes saving a life, that makes it all worthwhile.”

Check out photos from the dinner below. (Photos by Erinn Halasinki)