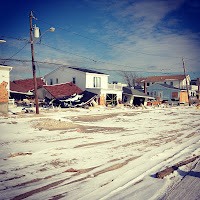 Though the temperature sank to single-digit degrees this weekend, a stalwart group from Fordham trekked to Breezy Point for the second in a series of “Sandy Saturdays” to help those recovering from Hurricane Sandy.

The cold forced the group of students, alumni, faculty, and staff to concentrate on indoor projects for the day, including removing damaged insulation, reinsulating, and bringing in new sheetrock.

“We ended up with 22 people in Breezy Point—more people than degrees!” said Gil Severiano, assistant to the vice president of campus ministry, who was one of the chaperones.

The group also brought donations and other supplies to residents, many of whom are still displaced three months after Sandy struck the east coast. Despite having found temporary shelter in apartments or with family and friends, many lack the comforts of home, making emotional recovery difficult, Severiano said. 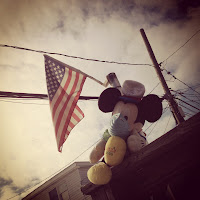 “When something’s wrong, a lot of us go to the kitchen and make food, because making food is such a nurturing act for your family,” she said. “One woman told us that now, every time she reaches for something to use, there’s nothing there. You think you have a measuring cup, or you think you have a frying pan, and you don’t. The cookbooks you used all your life, that your mother handed down to you, don’t exist anymore.”Several participants of the Jan. 26 trip, which was co-sponsored by the Office of Alumni Relations, were featured in a CBS news video, which can be viewed here.Though the number of overall volunteers have decreased during the winter months, a devoted corps labored beside the Fordham group on Saturday, including a few New Orleans residents who wanted to repay the kindness of New York volunteers who came to help victims of Hurricane Katrina.”Part of the trip involves going into somebody’s home, seeing firsthand what happened, seeing somebody’s reaction to their whole world being turned upside down, and offering comfort and support,” Severiano said. “It was a good experience for the students, the alumni, everyone, because we actually did important work that day.”The trip was part of a series of one-day outings known as Sandy Saturdays that Fordham will sponsor throughout the spring semester. Volunteers will join organizations such as Habitat for Humanity to help clear debris, gut devastated homes, and assist in the beginnings of the rebuilding efforts.Sandy Saturdays are set for:

Anyone interested in either chaperoning or volunteering should contact the Dorothy Day Center for Service and Justice at (718) 817-4510, or by going online here.