skip to main content
Return to Fordham University
You are at:Home»Living the Mission»Vatican’s Secretary of State Proposes Partnership Between Fordham and Rome School
Cardinal Parolin embraces the Fordham spirit with a new baseball cap from President Tetlow. Photos by Taylor Ha
In a special pilgrimage to Rome in June, President Tania Tetlow and a group of Fordham representatives met with Cardinal Pietro Parolin, the Vatican’s secretary of state. Speaking to the group in the official residence of Pope Francis, the cardinal praised Fordham founder Archbishop John Hughes and offered an invitation to establish a partnership with the University.

An Invitation From the Second-Highest Ranking Official in the Vatican

In a 20-minute speech, Cardinal Parolin said that concern for education has always been at the heart of the church—something this is “clearly evident” at Fordham, especially through its founder, Archbishop Hughes. 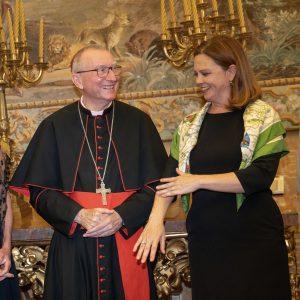 “Archbishop Hughes had made education a priority, because he believed it was essential if the poor immigrant population that made up the majority of his flock were to emerge from poverty and advance economically and socially in their adopted land,” said Cardinal Parolin.

He said that the same desire for social justice inspired his predecessor, Cardinal Domenico Tardini, who served as Vatican secretary of state from 1958 to to 1961. One year after World War II ended, Cardinal Tardini founded Villa Nazareth—a Vatican-affiliated residential college for talented students from low socioeconomic backgrounds—to help orphans reach their potential in war-torn Italy. Since then, Villa Nazareth has evolved into a prestigious institution that educates and houses gifted students, free of charge. There are currently about 170 students—college-age men and women who study a wide range of disciplines—including students from third-world countries marked by poverty and social and political strife, he said.

“In the 76 years since its founding, Villa Nazareth has never lost the spirit with which Cardinal Tardini established it,” said Cardinal Parolin, who supervises the school. “It is our hope that, in our shared journey as church, a recognition of the similarities between our two solid and fruitful educational experiences can lead to a long-term encounter, support, and friendship between Fordham and Villa Nazareth.”

The Fordham delegation with Cardinal Parolin

A Meeting in a Historic Place

The meeting with Cardinal Parolin was part of a summer pilgrimage to mark the 500th anniversary of the spiritual conversion of St. Ignatius Loyola, the founder of the Jesuits, who spent 15 years in Rome. The trip was also an opportunity for the University’s leaders to nourish their spiritual faith and to build new partnerships abroad, particularly with church leadership and educational institutions.

The Fordham delegation met with Cardinal Parolin in the Apostolic Palace, a grand building with more than 1,000 rooms, including the official residence of the reigning pope and government offices.

“We were one floor below the papal apartments, meeting with the number two person in the Vatican and sitting around a table in a room that is used to sign treaties between the Vatican and countries around the world,” said John Cecero, S.J., vice president for mission integration and ministry at Fordham. “You knew you were in a very unique and special place.”

For nearly a decade, Cardinal Parolin has served as secretary of state of the Vatican, where he works closely with Pope Francis to govern the universal church. As a spokesperson for the Apostolic See, he aims to carry out its goal of working with international organizations to safeguard the basic rights of every person. He is also an expert on the Middle East who has helped to reopen dialogue between Israelis and Palestinians.

“I’m thrilled that Fordham is trying to have a closer relationship with the Vatican,” said Ignacio Fernández de Lahongrais, GABELLI ’87, a member of the Fordham delegation. “We are a major Catholic institution in the United States, and we should be at the center of openness and intellectual curiosity.”

Later that evening, four members of the Fordham delegation visited the campus. They toured the facilities, spoke with current students, and discussed a potential partnership with Villa Nazareth’s deputy president, Archbishop Claudio Celli. 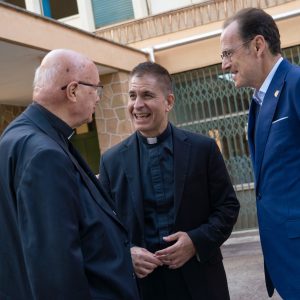 Archbishop Celli said that an exchange program between the two Catholic schools could be powerful—and Fordham’s senior leadership agreed.

“I would love to think that we could find a way to figure out how to work together and try to enhance both the incredible work that you’re doing here and the mission of Fordham University,” Armando Nuñez Jr., chair-elect of the Fordham Board of Trustees, said to Archbishop Celli and other administrators at Villa Nazareth. “So again, thank you for your inspiring service.”

Father Cecero, who is helping to coordinate a partnership with Villa Nazareth, said the potential partnership will help Fordham to increase its global presence and its connection with the church.

“This relationship will be very important in terms of Fordham’s ambitions to expand our global footprint,” said Father Cecero. “Through Cardinal Parolin, who is a sponsor of Villa Nazareth, we will have an opportunity to stay connected with the universal church.”

An exchange of gifts between Fordham and Villa Nazareth