skip to main content
Return to Fordham University
You are at:Home»University News»Vatican Secretary of State Praises IPED Report as Representative of Church’s Mission
Cardinal Pietro Parolin concludes his remarks. (Photos by Tom Stoelker)
On concluding a week of formal diplomacy at the United Nations General Assembly, His Eminence Cardinal Pietro Parolin, secretary of state for the Vatican, visited Fordham for a comparatively relaxed meal in the President’s Dining Room at Fordham’s Lincoln Center campus on Sept. 27.

The event was sponsored by Fordham’s Department of International Political Economy and Development (IPED) and the Centisemus Annus pro Pontifice Foundation (CAAP), and gave IPED students the opportunity to present to his eminence the results of their research compiled in the 2019 Fordham University Pope Francis Global Poverty Index, which globally measures poverty and well-being. 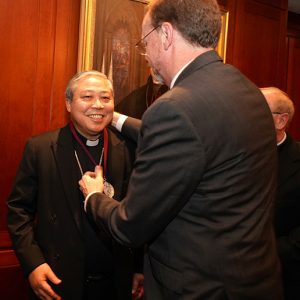 The evening also honored Archbishop Bernardito Auza, permanent observer of the Holy See Mission to the UN, who has been a steadfast supporter of IPED and mentor to dozens of Fordham students. Joseph M. McShane, S.J., president of Fordham, celebrated the archbishop by surprising him with one of the University’s highest honors, the President’s Medal.

In a citation read by Michael McCarthy, S.J., vice president for mission integration and planning, the University praised Archbishop Auza for his work as well as his ability to “leaven discussions of grim issues with amusing stories and self-deprecating wit” while “continuing to bring hope and light into many dark places” through his humanitarian efforts.

While the evening was peppered with insider humor about Jesuit and church history, the evening’s true purpose was enunciated by Cardinal Parolin in his remarks. He recalled a recent papal visit to Mozambique, Madagascar, and Mauritius, where the Pope’s entourage encountered great beauty alongside extreme poverty and emotional wounds left behind by decades of regional conflict.

“Looking at the Pope Francis Global Poverty Index, I am reminded that so many of our brothers and sisters in those countries, especially in Mozambique and Madagascar, lack the minimum material and spiritual goods that Pope Francis mentioned in his address to the United Nations General Assembly in September 2015—those goods that would ‘enable’ them ‘to escape from extreme poverty… allow them to be dignified agents of their own destiny’ and ‘live in dignity,’” he said, quoting the pope.

For that to happen, he said that Pope Francis prescribes an “absolute minimum” of lodging, labor, and land as well as spiritual freedom, which includes religious freedom, the right to education, and civil rights. 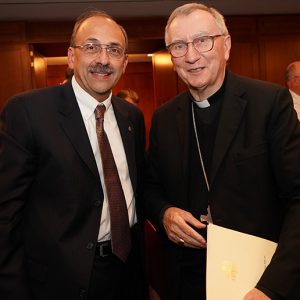 Dr. Frederick F. Fakharzadeh, president of CAPP-USA, with the cardinal

Cardinal Parolin brushed aside critics who have said the pope and the Catholic Church are obsessed with the poor, because it defines who they are.

“Taking care of the hungry, the thirsty, the stranger, the naked, the sick and the imprisoned is the yardstick that our Lord Jesus will use to measure how much we shall have lived the greatest commandment of love,” he said. “In brief, we care, because Jesus cares.”

He noted that the Poverty Index includes education as an indicator of spiritual well-being among the poor, which he said is not surprising coming from an institution like Fordham. He said that the University is part of long tradition of the church that places education at the heart of its mission in the world. To underscore centuries of involvement in academia, he said, Pope Francis recently launched the Global Educational Alliance, which convenes next May at the Vatican. The alliance is set to combat division and antagonism in an era of change that disregards traditional paradigms

“We are rightly proud that over the course of our 2,000-year history, the Catholic Church has played a major role in education,” he said. “I am confident that Fordham, remaining faithful to its vocation and mission to give the best integral education possible, is … producing learned men and women of both the highest intellectual caliber and the most compassionate of hearts for all, especially for the poor and the suffering.”