skip to main content
Return to Fordham University
You are at:Home»Athletics»Up, Up and Away 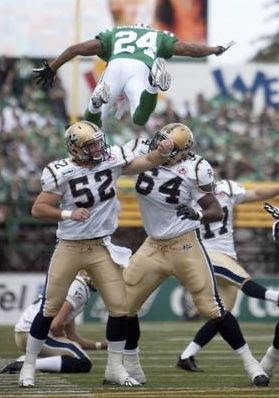 Known as Mr. Everything, Tad Kornegay, CBA ’05, is a defensive specialist for the Saskatchewan Roughriders of the Canadian Football League. Kornegay, who played defensive back at Fordham, appeared in the CFL All-Star Game last season and was named one of the 50 best players in the league, as his Roughriders captured the Western Division en route to a trip to the Grey Cup, the Super Bowl of the CFL. “Any way I can help my teammates out and the team, I’m going to do it,” said Korengay, seen here trying to block a kick in a game against the Winnipeg Blue Bombers. “Wherever they put me, I want to be at my best.”

Read more about Kornegay’s success in the CFL.