skip to main content
Return to Fordham University
You are at:Home»Arts and Culture»University Remembers Irma Jaffe, Founder of Music and Art History Department

Irma Jaffe, Ph.D., founder and the first chair of what is today the Department of Music and Art History, died on Jan. 3 at the age of 101.

“Irma was a towering figure in the life, history, and ministry of the University, a loving mentor to generations of Fordham students, a cherished colleague, and a wise counselor to deans, vice presidents, and presidents,” said Joseph M. McShane, S.J., president of Fordham. “She endowed the University with her great energy, vision, and zest for life.” 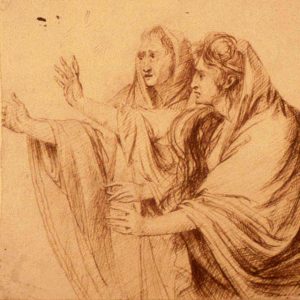 A study of two female figures by John Trumbull from the University library. Jaffe used the Trumbull collection in her research.

“She was a real library lover,” said LoSchiavo.

LoSchiavo recalled that on the day that Walsh Library was dedicated, Jaffe was invited to join the festivities held outdoors, where everyone had gathered. Instead, “she was inside with her research spread out on a table,” recalled LoSchiavo. “She was at work, she was doing her research.”

LoSchiavo said that Jaffe made extensive use of the library staff and resources, turning up original research from its own collections—namely the John Trumbull drawings—on whom she later published a book. One of her findings included the discovery that a few of the signers of the Declaration of Independence from Trumbull’s iconic painting had been misidentified.

“Irma was one of the first people to actually exploit the resources at Fordham for scholarly purposes,” concurred Loschiavo’s husband, Joseph LoSchiavo, FCRH ’72. The couple were both students of Jaffe, and later went on to become her colleagues and friends.

“I think she put herself in the place of these women and thought it might be exciting to be a person in those times,” said her daughter, Yvonne Korshak, Ph.D. “She just loved Italy.”

Korshak said that her mother first visited Italy in the 1950s, where she fell in love with “the Italian mood.” The LoSchiavos recalled that Jaffe lived life with a European flair, inviting guests for dinner at her home only to shift the venue across the street to the park to eat al fresco. The guests at her many parties included a mix of ambassadors, art critics, conductors, poets, and the occasional accordion player.

“How many 85-year-old women give costume parties?” asked LoSchiavo.

But it was the work that sustained her said her daughter.

“She was really grateful for, rooted in, and identified with Fordham,” she said. “It was such a fine academic home for her.”

Jaffe organized two noted symposia on “Baroque Art: The Jesuit Contribution” and “The Italian Presence in American Art” that led to published books. Among other distinctions, she was designated as Cavalieri in the Order of Merit of the Republic of Italy for contributions to Italian art and culture.

But above all she was a very serious mentor and teacher, those that knew her said. Joseph LoSchiavo recalled a class in the late 1960s when the buzzword of the time was “relevant.”

“We were still dealing with the war and everybody was questioning everything,” said LoSchiavo. “It was the last day of class and someone asked if Ottonian art would be on the exam, to which she replied, ‘Yes,’ and somebody in the back of the class said, ‘Oh yeah, like it’s relevant.’”

“Irma pulled herself up to her full height and said, ‘Everything produced by the hand of man is relevant.’”

Jaffe was predeceased by her first husband, Donald Korshak, and her second husband, Samuel Jaffe. In addition to Yvonne Korshak, she is also survived by her granddaughter, Karin and son-in-law, Robert.