skip to main content
Return to Fordham University
You are at:Home»Inside Fordham»University Ready for Challenges Ahead, President Reports 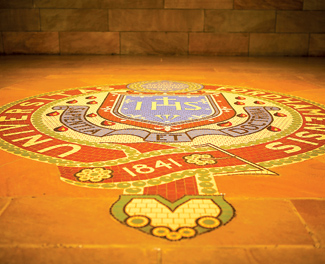 Joseph M. McShane, S.J., president of Fordham, laid out the challenges that face Fordham, and the University’s plans to confront them, at the 16th Annual Faculty Convocation.

“The state of the University is pretty good, but the environment in which we operate is more and more challenging every year,” he told faculty and administrators on Sept. 15 at the McGinley Ballroom.

“We could not achieve greatness with out your vision, creativity, and generosity of heart.”

For this year’s report, Father McShane concentrated his remarks on the University’s admissions, finances, and physical plant, with specific attention given to the dramatic transformation of the Lincoln Center campus.

Undergraduate admissions have been a bright spot at the Lincoln Center campus, where a brand new residence hall and law school building opened this fall. Fueled by greater-than-expected interest in the Gabelli School of Business’ inaugural cohort at Lincoln Center, the University increased the size of its incoming class by 250 students, he said.

In addition to noting the Class of 2018 features more students from the top 10 percent of their high school class, Father McShane said it has a higher percentage of African-Americans, Latinos, and Asians than in previous years. Continuing the University’s trend toward becoming a global institution, the Class of 2018 also saw a 21 percent increase in its international student enrollment.

On finances, Father McShane reported on the success of Excelsior | Ever Upward | The Campaign for Fordham, which closed in March at $540 million. The successful campaign had a significant effect on the University’s ability to expand its physical plant, offer financial aid, and shore up its endowment, which currently stands at $702 million—up from $621 million last year and $548 million the year before that.

The additions of McKeon Hall and the new law school building at the Lincoln Center campus, and the renovation of Hughes Hall at the Rose Hill campus are the most obvious examples of the University’s drive to add sorely needed academic space. Prior to their construction, he said, it had been 40 years since new academic space had been built. When the University renovates the old law school building and takes control of the former College Board building across the street at 45 Columbus Ave. that it bought last year, it will have added 570,000 square feet to the campus.

To pay for the new construction and operations at Lincoln Center, the University relied on $200 million from the sale of two properties on Amsterdam Avenue and funds raised in the capital campaign.

The $250 million price tag of the building is worth it, he said, because such a structure can help attract students from far afield.

“McKeon Hall has 430 beds. Those 430 beds will enable Fordham College at Lincoln Center and a small cohort at Gabelli to attract students from distant markets, and thereby lessen our dependence on the market in the Northeast, where the numbers are shrinking,” he said.

“We saw this as a strategic move that will enable us to stabilize ourselves as we move into the future.”

With the old law school building now open to other schools and departments, a reallocation of space can happen at the Lowenstein Center, where Father McShane joked, “Life was lived on elevators.”

Going forward, he announced the creation of a rolling University Planning Committee that eschews the traditional “once-and-for-all 10-year plan.” Ten years ago, he noted, few would have predicted the exponential rise of massive open online courses (MOOC’s), the pressure on colleges from state and federal governments, or the various emergent fields in technology and medicine.

“Strategic planning in an ongoing way will give us the agility that we need not only to stay even, but to move ahead in terms of quality and in terms of programming,” he said.

Other University achievements include:

-Several schools rose or retained places in this year’s U.S. News and World Report rankings. The Graduate School of Social Service is ranked No. 11 in the country, while Fordham Law rose two places, to No. 36., and received high marks for its intellectual property, clinical training, dispute resolution, and part-time programs. Bloomberg Businessweek named the Gabelli School of Business the 38th-best undergraduate school in the country, up from 40.

-Last year, students won 13 Fulbrights for a total of 101 in the last decade (making Fordham one of the top Fulbright producers in the nation), one Boren award, a Gates-Cambridge scholarship, a Truman Fellowship, and a Beinecke Scholarship.