skip to main content
Return to Fordham University
You are at:Home»Education and Social Services»University Mourns the Passing of Professor Emerita Joanna Kellogg Uhry
Photos by Michael Dames
Joanna Kellogg Uhry, Ed.D., a professor emerita of literacy education who taught educators how to teach reading and writing to children, died on Aug. 26 from complications of Parkinson’s Disease and Lewy Body Dementia. She was 82 years old.

“Dr. Uhry served as a leader in preparing teachers at the Graduate School of Education for over 20 years,” said Virginia Roach, Ed.D., dean of GSE.

The focus of her research was on understanding how to teach children to read—particularly children with dyslexia. Among her research publications are Finger-Point Reading in Kindergarten: The Role of Phonemic Awareness, One-to-One Correspondence and Rapid Serial Naming (Scientific Studies of Reading, 2002) and Dyslexia: Theory & Practice of Instruction (York Press, 2005), a book she co-authored with a colleague at Columbia Teachers College.

Uhry was also responsible for securing nearly $3 million in grant funds for the Ennis William Cosby Graduate Certificate Program at GSE—a six-course program that prepared educators to teach reading and writing to young children with learning differences. In addition, she was instrumental in Fordham’s elementary education program winning the U.S. Department of Education’s award for excellence in teacher education programs.

“Joanna was a tireless supporter for both teachers in the field as well as students in New York City classrooms,” said her longtime colleague, Molly Ness, Ph.D., associate professor in curriculum and teaching at the Graduate School of Education.

‘The First Thing Joanna Did Was Read to Her’ 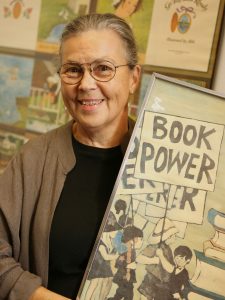 Outside of academia, Uhry was a gardener, cook, ceramicist, weaver, painter, and photographer. At home, she directed family plays and movies. She was also a “huge patron of the arts,” said Ness. After classes were done for the day, they’d sometimes watch a symphony or ballet at Lincoln Center together. But the memory that stands out, said Ness, is the day that Uhry met Ness’ daughter.

In 2010, Ness’ daughter was born at Mount Sinai West, just two blocks away from the Lincoln Center campus. In between classes, Uhry came to the hospital and cradled the newborn in her arms. She was the third person to hold her.

“The first thing Joanna did was read to her,” Ness said. “And that just, to me, spoke to how much she loved reading, preparing young readers, and preparing teachers to infuse classrooms with a love of reading.”

It was a passion that she passed onto her doctoral students. In phone interviews, they said she taught them the “little things” that shape children’s reading habits, like pointing to words in a book and reading stories out loud. She emphasized equity in the classroom and respecting students’ native languages. And she did it all with a warm—sometimes dry—sense of humor, a patient presence, and a “twinkle in her eyes,” they said.

“I didn’t know anything about the developmental stages of reading, even though at that point, I had been teaching for seven years,” said Gary Wellbrock, Uhry’s GSE mentee who graduated with a Ph.D. in language, literacy, and learning in 2015. “It was what she taught me that moved me … I became a reading specialist because of her.”

Lessons in Literacy and Parenthood

Uhry made her teaching personal. She showed her mentees old-school, grainy VHS tapes of her daughters with their children and explained that the ways the mothers and children were interacting—the babies cooing, the mothers responding to their sounds, their direct eye contact—were examples of important oral language development.

Cayne Letizia, a middle school English teacher in Westchester County who was mentored by Uhry, said he remembered Uhry’s lesson when he became a father.

“I always thought reading was just words and letters on a page, but she said the roots of it are in oral language development. So encourage kids to talk and play and touch and point,” said Letizia, who earned a Ph.D. from Fordham in language, literacy, and learning in 2010. “When I was having kids, I was like, oh my God—this really works.”

Uhry cared for her mentees beyond the classroom. Jean Marie Humphries, O.S.U., who graduated with a Ph.D. in language, literacy, and learning in 2013, remembered when a GSE peer had learned that her father had passed away. At the time, Uhry, Humphries, and the young woman were working with students and teachers at a local public school.

“I can see ourselves sitting in the school cafeteria, over by the side, and Dr. Uhry comforting this young woman, talking with her, and then going through the steps of us taking a cab back to Fordham to really work out everything,” recalled Sister Humphries, now principal of Academy of Mount St. Ursula in the Bronx. “It just spoke volumes to me about the woman Dr. Uhry was.” 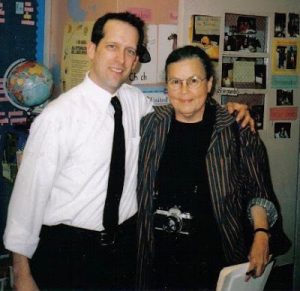 Wellbrock and Uhry in the early 2000s

Wellbrock recalled a book she had gifted him: The Story of Edgar Sawtelle by David Wroblewski. The main characters are a mute boy who speaks only in sign language and his pet dog. When she read the book, she thought of Wellbrock—an early childhood educator at the American Sign Language and English Lower School in Manhattan.

“When I heard the news [about her passing], I took the book off my bookshelf and read her note,” Wellbrock said. “Those extra, above and beyond things that you wouldn’t expect of a mentor, but so thoughtful and touching … that’s something I’ll always cherish.”

Uhry was born on February 15, 1937, in Charlotte, North Carolina, to Barbara Mosenthal and Winston Trowbridge Kellogg. She grew up in Birmingham, Michigan, and she attended Kingswood/Cranbrook Schools, a private preparatory school in the same state. She went on to attend Brown University, where she graduated with a bachelor’s degree in art history in 1959. That same year, she married acclaimed playwright Alfred Uhry, whom she met at Brown.

For many years, she was a grade school teacher at the Calhoun School, a private school in Manhattan that sparked her interest in learning disabilities. She went on to earn two master’s degrees and an Ed.D. in education at Columbia University. Uhry taught students as a member of the faculty at Columbia Teachers College until she joined Fordham’s faculty in 1994. In honor of 20 years of service at Fordham, she received the University’s Bene Merenti medal in 2014.

She is survived by her husband; four daughters, Emily, Elizabeth, Kate, and Eleanor; two sisters, Constance and Emily; and eight grandchildren.

Contributions in Uhry’s memory may be made to Lewy Body Dementia Association, 912 Killian Hill Rd., SW, Lilburn, GA 30047 or to the Michael J. Fox Foundation, POB 5014, Hagerstown, MD 21741. A memorial service will be held later this fall in New York City.