Meredith Hanson, DSW, a professor whose wry sense of humor and gentle guidance encouraged master’s and doctoral candidates through the Graduate School of Social Service (GSS) for 20 years, died on Monday, Jan. 18.

Hanson was the director of the school’s PhD program.

“Meredith was one of the elder statesmen of social work education, a thought leader, and dedicated researcher right until the end,” said Debra McPhee, PhD, dean of GSS.

He was also an avid amateur photographer in his spare time, said colleagues.

“He carried his camera everywhere, because he loved to capture people in their essence,” said his former student and friend Susan Taveras, GSS ’07.

A viewing will be held at Ortiz Funeral Home at 4423 Broadway from 3 p.m. to 9 p.m. on Friday, Jan. 22. A service for the Fordham community will be announced soon.

Colleagues recalled that Hanson was consistently at his Lincoln Center campus office by 5 a.m. His hardworking ethos remained steadfast throughout his long illness, and he continued to work up until last Thanksgiving.

“I used to teach a class at 7:30 a.m. and he’d already been there for a couple hours,” said David Koch, PhD, director of the Bachelor of Arts program at GSS. “We regular mortals came in at a later hour.”

“There were so many times that I’d email him at 5:30 in the morning and he’d already be at his desk,” said Rebecca Linn-Walton, PhD, GSS ’15, one of his students. “He’d help me understand the problem, so that by the time I saw him at our 8 a.m. class, it would be solved.”

Hanson’s students praised his personal touch, and his colleagues recalled a scholar whose many papers on social justice and evidence-based practice took him to conferences around the globe.

Professor Robert Chazin, PhD, who collaborated on several papers with Hanson, said he’d presented his research worldwide—in Vietnam, the Ukraine, India, and Iceland, among others. His journal articles and national conference presentations were too numerous to mention.

Throughout, he said, Hanson had an uncanny ability to empathize and observe.

“When you watched him with people, he was extremely respectful, and gifted in an ability to draw them in,” said Chazin. “He was particularly committed to critical thinking and he created a place of safety where students could express themselves.”

Ali Flynt, GSS ’15, said that her penchant for perfectionism hadn’t prepared her for all the red markings that Hanson left on her papers. At first she was concerned, thinking that the markings were corrections, but on closer inspection she realized that Hanson’s comments were “a positive dialogue.”

“He had written feedback reacting to each sentence, suggesting different knowledge sources, and referencing other books that responded to my thoughts,” she said. “I cherished those papers and I really had trouble sticking to the page limit, because I wanted more comments from him.”

Taveras recalled Hanson taking a personal interest in her well-being one day when the stress of graduate school led her to erupt in tears outside of class.

“He used his sense of humor to get at the bottom of what was going on with me,” she said.

The two became good friends, said Taveras. She asked Hanson to be the godfather of her two children, Kristian and Kendrick—a role she says he relished. He continued to mentor Taveras and teach by example.

“He never gave an opinion; he’d allow you to think of the answer, and he never overstepped,” said Taveras, who said that she now incorporates Hanson’s style of letting clients “find their own solution” into her own practice.

“He lived this every second. He’d say, ‘You have to let people be who they are,’” she said.

Hanson elaborated on the concept in an Inside Fordham interview conducted in 2012.

“If clients perceive your work with them as very positive, you are going to have a bigger impact,” he said. “And part of being perceived as positive is being collaborative—engaging persons around their struggles and their issues, and drawing from them their own resources to resolve their problems.” 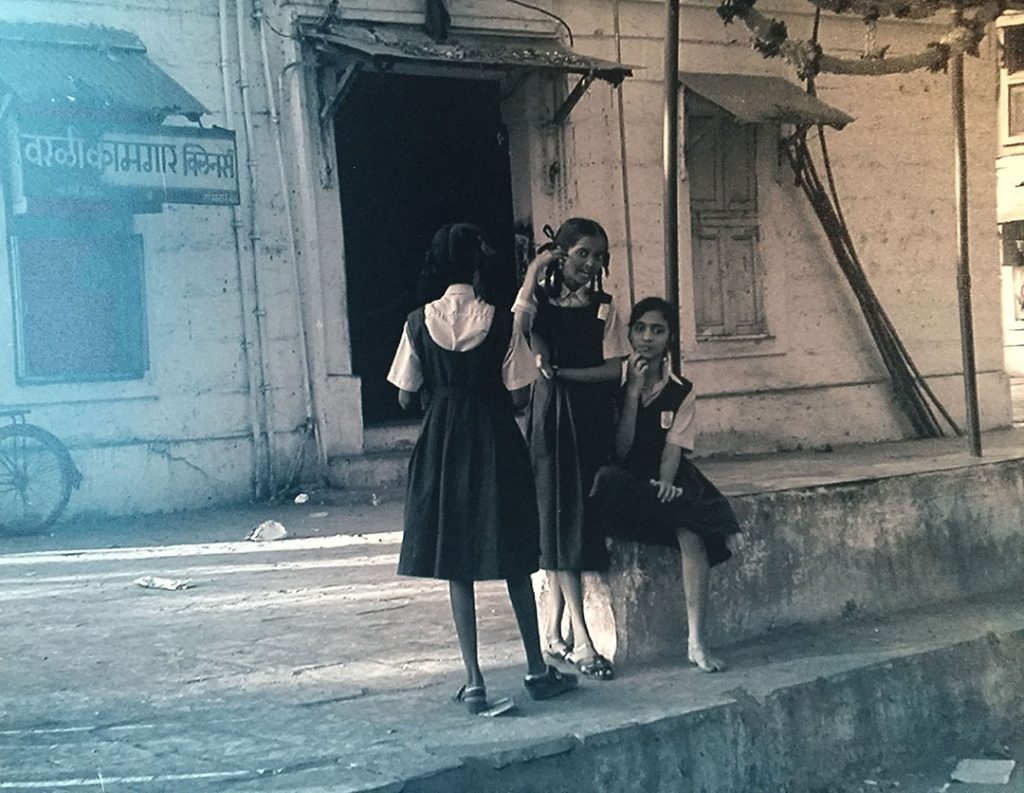 A photo taken by Professor Hanson in India.

It was Professor Hanson’s wish that any donations go toward the GSS PhD Scholarship Program.