Astrid O’Brien, PhD, professor emerita of philosophy who taught at Fordham’s Manhattan campuses for more than 50 years and built a reputation of steadfast care and concern for her students, died on April 3 at the age of 82. 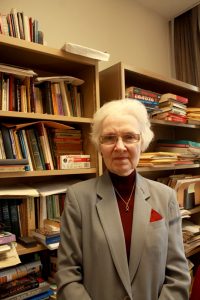 Services will be held for O’Brien on Wednesday, April 6 from 4 to 8 p.m. at the Riverdale-on-Hudson Funeral Home, 6110 Riverdale Ave., Bronx, New York.

“Astrid was so much a part of the college here,” teaching a vast range of courses and always advocating for what students needed, said Robert A. Grimes, SJ, dean of Fordham College at Lincoln Center (FCLC), where O’Brien taught until her retirement in 2012. “She was always extremely interested in her students and would go to bat for them,” looking out for their interests both academically and personally, he said.

Colleague Dominic Balestra, PhD, professor of philosophy, described her as “unhesitating in her commitment and dedication to students and resolute in her commitments to what she believed in.”

O’Brien was a devout Catholic and an active and vibrant member of the American Catholic Philosophical Association in the New York area, he said. She not only served as a conscientious treasurer for the association but also started a women’s group within it. “She was a voice there, and a strong one,” said Balestra, who served as the association’s program chairman and then president.

Born Astrid Marie Richie, O’Brien earned a bachelor’s degree in biology from the College of Mount St. Vincent, but switched to her true passion in graduate school. She earned a master’s in philosophy from Marquette University and her doctorate from Fordham, specializing in the ideas of St. Thomas Aquinas.

She began her Fordham career in 1959 as an adjunct professor in the undergraduate school of education at Fordham’s former facility at 302 Broadway, where she met the professor, Robert C. O’Brien, PhD, who would become her husband. The couple taught together for more than 50 years, and O’Brien retired in 2012, after 53 years.

A Q and A with O’Brien was featured at that time in the FCLC student newspaper, The Observer.

O’Brien and her husband had three children: Robert J. O’Brien of Port St. Lucie, Florida; Frances C. O’Brien of Saddle Brook, New Jersey and Carol O’Brien Haagensen of Westborough, Massachusetts, and three grandchildren, according to a April 3 obituary. In lieu of flowers, the family asks for donations in her memory to go to supporting Heifer International, one of her favorite charities at http://fundraise.heifer.org/amob.