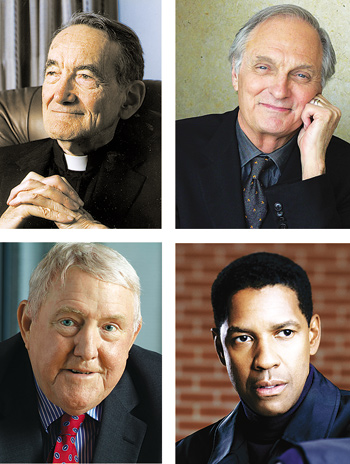 The inductees were honored at a black tie reception at the New York Botanical Garden across from Fordham’s Rose Hill campus. They are: the late Avery Cardinal Dulles, S.J., former Laurence J. McGinley Chair in Religion and Society; Alan Alda, FCRH ’56; E. Gerald Corrigan, Ph.D., GSAS ’65, ’71; and Denzel Washington, FCLC ’77. Alda and Washington could not attend the evening’s festivities, but family members of Cardinal Dulles were on hand.

The Hall of Honor recognizes the accomplishments of alumni whose lives have exemplified and brought recognition to the ideals to which the University is devoted.

Avery Cardinal Dulles was a professor at Fordham from 1988 until his death in 2008. In his capacity as the McGinley Chair, he delivered a total of 39 lectures on subjects that ranged from the death penalty to human rights, and church reform. He was the first American theologian who was not a bishop to be appointed to the College of Cardinals.

Bronx-born actor Alan Alda is a six-time Emmy and Golden Globe Award winner who has also been nominated for an Oscar and a Tony. Generations of Americans remember him for his portrayal of Captain Hawkeye Pierce of M*A*S*H, and he is consistently rated one of the greatest television actors of all time.

On presenting Corrigan with his framed citation, Joseph M. McShane, S.J., president of Fordham, called his support for the University “magnanimous.” E. Gerald Corrigan, Ph.D., has built a career in finance that spans the public and private sectors, where he is equally respected for his deep knowledge and skill in assessing risk and establishing stability. Corrigan served as president of the Federal Reserve Bank of New York from 1985 to 1993, where his swift action following the 1987 Black Monday market collapse is widely credited with preventing further catastrophe.

One of America’s greatest actors, Denzel Washington has been a champion of theater education at Fordham. The two-time Oscar winner served on the University’s Board of Trustees from 1994 to 2000, and returns occasionally to the Lincoln Center campus to inspire theater students with his advice and success (see pg. 1). In 2011, he endowed the Denzel Washington Chair in Theater with a $2 million gift to Fordham, and made a $250,000 gift to establish a scholarship fund for theater students.

The honorees’ names will be inscribed in the main corridor of the administration building on the Rose Hill campus.

The University also inducted 21 new members into its Archbishop Hughes Society, recognizing them as men and women whose spiritual, financial and intellectual gifts have helped the University realize its mission.