Three Fordham students in the Naval Reserve Officers Training Corps (NROTC) were commissioned as U.S. Navy and U.S. Marine Corps officers at a ceremony held in Keating Hall on May 18.

Capt. Loughlin administered the oath of office to Ensign Chelsey Caitlin Sellers, FCRH ’12, who graduated with degrees in general science and theology. A native of San Bernardino, Calif., Sellers was selected for surface warfare officer duty and will report to the USS STOUT (DDG 55) in Norfolk, Va.

Chief Warrant Officer 4 George Miller, USN (Ret.), administered the oath of office to Ensign Isabel Ramona Gomez, FCRH ’12. Gomez, who graduated with a degree in biology, will report to the USS STETHEM (DDG 63) in Yokosuka, Japan, as a surface warfare officer.

Lt. Cmdr. John Cieslewicz, USN (Ret.), administered the oath of office to U.S. Marine Lt. Tyler Cieslewicz, GSB ’12, who graduated with a B.S. in entrepreneurship and a minor in psychology. Cieslewicz will report to The Basic School in Quantico, Va.

All three students were members of the NROTC unit headquartered at the SUNY Maritime College in the Bronx. The unit, of which Fordham students have been a part since 1985, is one of the largest NROTC units in the country and commissions Navy, Marine, and Strategic Sealift Officers. Established in 1973, the unit also includes students from Molloy College and Columbia University. 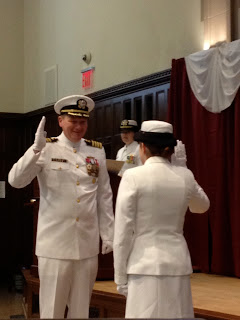 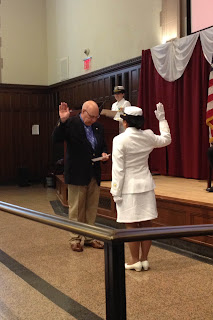 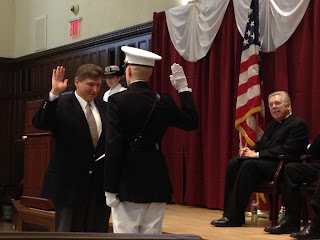