skip to main content
Return to Fordham University
You are at:Home»Campus Life»Tears and Memories at Mass for Nicholas Booker

He loved brown sugar-cinnamon Pop-Tarts, colorful clothes, and rap music. He was a Missouri native who had just a month ago found a new life in New York City. He was a first-year student at Fordham College at Rose Hill with a promising future. 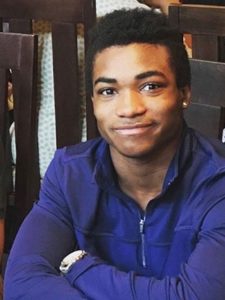 Photo courtesy of the Booker family

He was Nicholas “Nick” Jabari Booker.

On Sept. 27, Booker died at St. Barnabas Hospital with his mother at his side after suffering what doctors believe was a severe asthmatic attack. He was 18.

Booker was the captain of the football team and a star student at John Burroughs School, a selective prep school in St. Louis. At Fordham, he had made a new home for himself in Martyrs’ Court. In the days following his death, Booker’s Fordham friends spoke with Michael C. McCarthy, S.J., vice president for mission integration and planning. “What was Nick like?” he asked them.

“They all, without skipping a beat, talked about his laugh. When I asked them to imitate his laugh, no one dared. But it was infectious, they said, and warmed the room,” said Father McCarthy at a memorial Mass for Booker at the University Church on Oct. 2.

If Booker was alive, they told Father McCarthy, they would let him know that Lil Wayne’s Tha Carter V studio album finally came out. And if Booker could hear them, they would tell him that they miss him.

A memorial service to celebrate Booker’s life is tentatively planned for late December at John Burroughs School. But since it is unlikely that many of his Fordham friends will be able to fly to Missouri, the University celebrated his life with a Mass at Rose Hill.

They all came: his friends, the emergency room doctors from St. Barnabas who tended to Booker, the University’s Student Affairs and Campus Ministry staff who stayed with his family in the hospital until his death, members of the Jesuit community, and over five hundred more. They filled the pews, sitting side by side and often wiping away tears. Near the church altar, propped above a white tablecloth, sat a large, framed portrait of Booker.

Booker’s roommate, Joseph Russo, stood at the pulpit and spoke about his first friend at Fordham.

“He comes from a suburb of St. Louis, Missouri, and I am from Central New Jersey. Coming from different parts of the country and having different backgrounds, I thought we would simply coexist in the room together,” he said. “Even stepping into our room, there appeared a stark contrast between us. On my side were posters of the Rat Pack and Mobsters and a large tapestry of New York. On his side were posters of rappers that I have only vaguely heard of. But on the first night, I realized those were just superficial.”

They bonded over their mutual love of brown sugar-cinnamon Pop Tarts, which they stocked up on at the P.O.D. Market, Rose Hill’s grab ’n go store. When they weren’t eating Pop Tarts, they were munching on chips that Booker had brought from home. They were so popular among his friends that, two weeks into college, Booker received a huge package in the mail: a big box packed with more chips, said Russo.

“Before going out one night, we were both in another room with our friends, and Nick decides to play his Spanish playlist. He put it on and just started dancing,” Russo said. “It was so pure, a moment of pure bliss.”

And Booker’s style was not to be trifled with. He was a man who took pride in his hair, his Chuck Taylors that looked like he had drawn on them—but, Russo adds, Booker “insisted that’s how they came”—and pairing the perfect shoes with his outfits.

Russo lamented only knowing Booker for a short time. “While I only scratched the surface of his character,” Russo said, his voice breaking, “it was more than enough for me and everyone around us to realize how truly amazing Nick was.”

And because of Booker, two strangers are now able to see.

“Even in his death, because Nick was an organ donor, he chose to give others life, and that was one of the few consolations his mother has had in the last few days,” said Father McCarthy. “That because of Nick’s clear eyes, those who were blind can now see. Let his way of being in the world teach us to see as well.”

Booker is survived by his parents, Britt and Satonya Booker; his siblings, Christopher and Carmen Booker; his grandparents, Andy and Peggy Newman; his great-grandmother Mary Gregory; and many other relatives.

“Nick’s grandfather told us in the hospital that he had many chances and many choices and many options. He chose New York, and he chose Fordham,” said Joseph M. McShane, S.J., president of Fordham. “He was a New Yorker by adoption. So I think it is right for us to give him a proper New York farewell.”

The crowd broke into applause.