skip to main content
Return to Fordham University
You are at:Home»Editor's Picks»Tania Tetlow Named President of Fordham; First Layperson and First Woman to Lead the Jesuit University of New York
Photos by Patrick Ryan, Dana Maxson, and Bruce Gilbert
Tania Tetlow, J.D., a former law professor and current president of Loyola University New Orleans who has deep ties to the Jesuits and New York, has been named the 33rd president of Fordham. She will be the first layperson and first woman to lead the University in its 181-year history. Her tenure will begin July 1. 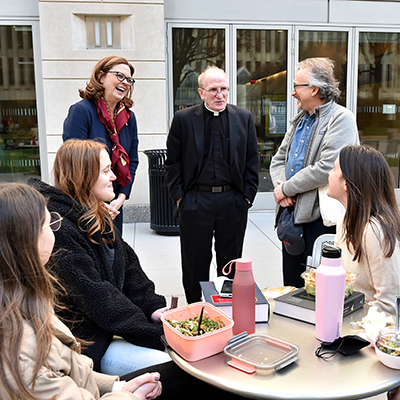 With students on the plaza at the Lincoln Center campus

“The Board of Trustees and the search committee were deeply impressed by Tania Tetlow from the moment we met her,” said Fordham Board Chair Robert D. Daleo, GABELLI ’72, who announced the news to the University community in an email today, noting that the board voted unanimously to appoint Tetlow after a nationwide search. “She is deeply rooted in, and a strong proponent of, Ignatian spirituality, and will be a champion of Fordham’s Jesuit, Catholic mission and identity. She has a deep understanding of and comprehensive vision for undergraduate liberal arts and sciences, the Gabelli School of Business, Fordham Law, and all of the graduate and professional schools of the University.”

‘Fordham Is the Reason I Exist’ 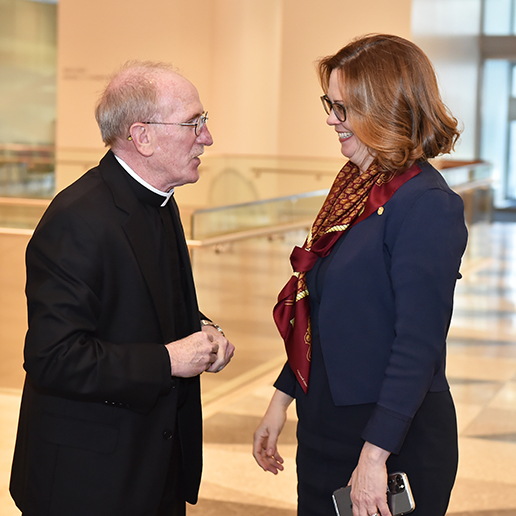 The 32nd and 33rd presidents of Fordham University

In a video message to the Fordham community, Tetlow said she is “honored beyond measure” to have been chosen as Fordham’s next president, and talked about what it’s like coming from “a family full of Jesuits.”

“They taught me that faith and reason are intertwined. They instilled in me an abiding curiosity to find God in all things … They sang me to sleep with a Gregorian chant and taught me the absolute joy of learning. I grew up in New Orleans, but Fordham is the reason that I exist. My parents met there as graduate students and got married, and I was born in New York,” said Tetlow, whose father was a Jesuit for 17 years before leaving the order to start a family. “Fordham loomed large in my family. It was an institution of breathtaking excellence in the most exciting city in the world.”

Tetlow and her family left the Big Apple for the Big Easy when she was a child; at age 16, she earned a Dean’s Honor Scholarship at Tulane University, where she later earned a Truman Scholarship that took her to Harvard Law. There, she embarked on a celebrated legal career and carried her commitment to justice forward as a professor, advocate, and university leader.

Joseph M. O’Keefe, S.J., GSAS ’81, the provincial of the USA East Province of the Society of Jesus, said, “I am delighted to welcome Tania Tetlow to the Jesuits USA East Province, where she will lead one of our most important sponsored works, Fordham University. She has deep family ties to the University. Along with her extensive leadership experience, President-Elect Tetlow brings a thorough grounding in Jesuit, Ignatian, Catholic identity to her new mission. I look forward to collaborating closely with her in the coming years.”

Tetlow took the helm at Loyola New Orleans in August 2018, becoming the first woman and first lay president to lead the institution since it was founded by the Jesuits in 1912. She steered the university through a remarkable economic turnaround after the most financially difficult period in its history. Under her stewardship, Loyola improved its bond rating, increased student retention, saw enrollment rise, and expanded online, graduate, and professional programs.

Her vision as president extended not only to Loyola but also to the city of New Orleans and society at large. She led the implementation of a strategic plan for inclusive excellence at the university, where ethnic minorities represent 51% of all undergraduates. At the height of the pandemic, she oversaw the creation of an undergraduate nursing program in partnership with a New Orleans health system. In response to issues of equity in higher education today, she penned several op-eds in national media outlets advocating justice for the country’s young people. 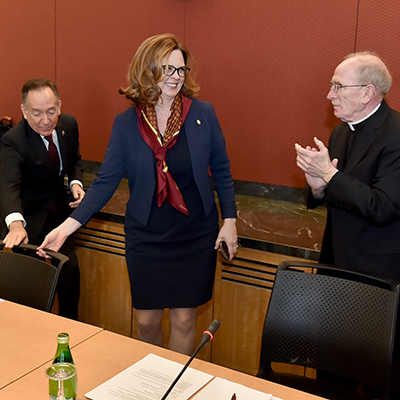 Tetlow at the Feb. 10 Board of Trustees meeting with Board Chair Robert Daleo and Joseph M. McShane, S.J., president of Fordham

At Tulane, she played a key role in significant advances in admissions, rankings, diversity, research strength, and fundraising. She led the university’s Title IX program, campus security reforms, and crisis management. And she spearheaded efforts to make meaningful progress on race and equity, and on addressing campus sexual assault. As a professor, she taught courses on civil procedure, constitutional law, and domestic violence law. She also directed the school’s domestic violence clinic, for which she secured $2.3 million in Department of Justice grants.

“Tania Tetlow brings to Fordham a powerful mix of academic accomplishments, a deep love of Jesuit education, a record of tirelessly fighting for justice, and visionary leadership in higher education,” said Fordham Provost Dennis Jacobs, Ph.D. “She is eager to build strategically on Fordham’s strong foundation in the liberal arts and superb graduate and professional schools, including one of the nation’s top law schools and trailblazing business schools. Tania aspires to distinguish Fordham as an outstanding university, offering a transformative education for its students and working to build a more just and thriving New York City, nation, and world.”

Tetlow served on several boards in New Orleans, including the New Orleans Library Board and Foundation, where she spearheaded a campaign that raised $7 million to rebuild flooded public libraries after Hurricane Katrina. She worked with the New Orleans Police Department to lead a turnaround of their sex crimes unit. She also served on the New Orleans Civil Service Commission, launching a compensation and staffing study of the entire city workforce. She was named one of the top 15 women in business in the U.S. by the National Diversity Council and one of the top 25 people to watch by the New Orleans Advocate. In 2011, she received the public service award from the New Orleans Association of Women Attorneys.

As a federal prosecutor, she specialized in general crimes, violent crimes, and major narcotics cases. She worked with the FBI and other law enforcement agencies to prosecute cases ranging from financial fraud to arson,  wiretap investigations, and bank robberies.

“Tania Tetlow has in abundance the qualities of leadership one needs to run a major university, among them discernment, patience, decisiveness, self-awareness, and magnanimity,” said Father McShane, who announced in September that the 2021–2022 academic year would be his last as president. “Her commitment to Jesuit pedagogy and to Fordham’s Jesuit, Catholic mission is both deep and well-informed. I shall rest easy with her in the office I have occupied for almost two decades.”

Though she won’t start in her new post until this summer, Tetlow is already a member of the Fordham community through her family connections: her late father, Louis Mulry Tetlow, a psychologist and former Jesuit priest, received his Ph.D. from Fordham’s Graduate School of Arts and Sciences in 1974, four years after earning a master’s degree from Fordham; and her mother, Elisabeth M. Tetlow, is also a double GSAS graduate, classes of 1967 and 1970, with master’s degrees in philosophy and theology. The prominent writer Joseph Tetlow, S.J., her uncle, provides another family connection to the Jesuits; he served for eight years in Rome as head of the Secretariat for Ignatian Spirituality and has held other important roles ranging from president of the Jesuit School of Theology at Berkeley to associate editor of America Magazine. He is currently writing full time at the Montserrat Jesuit Retreat House in Lake Dallas, Texas.

Tania Tetlow is married to Gordon Stewart, originally from Glasgow, Scotland. They have a 9-year-old daughter, Lucy, and a stepson, Noah.

“This is a historic and exciting moment for Fordham,” said Daleo. “As a university that seeks to transform its students’ lives, we are preparing to be transformed by bold new leadership—leadership that will build upon Father McShane’s legacy of academic achievement and institutional growth.”

10 Things to Know About Tania Tetlow