skip to main content
Return to Fordham University
You are at:Home»Inside Fordham»Sustaining a Fragile Past
Saturday, June 28, marks the 100th anniversary of the assassination of Austria’s Archduke Ferdinand, an event that triggered what would come to be known as World War I. One of the treasures that the Fordham University archives retains from that era is a 97-year-old flag of Fordham maroon honoring the Fordham Ambulance Corps that served in the war.
In spite of the flag’s fragile condition, the archives recently opened up the flag for photographing. Now, archivists are debating whether to display it in a case (in its folded condition) when a new library exhibit on Fordham and World War I opens next month.
Each time the flag is handled, small bits of the fabric flake away, where they disintegrate into a maroon powder when picked up and held.
Patrice Kane, head of Fordham archives and special collections, says the archives is hoping to re-pack the folded flag into a roll with acid-free paper and perhaps someday consider a full restoration.
“If it were to be restored, it would be nice to display it open,” said Kane.
In the meantime, the folded flag has been “preserved” through photography (below). Stay tuned to FordhamNotes for an announcement of the opening of the Walsh Library exhibit next month.
–Janet Sassi 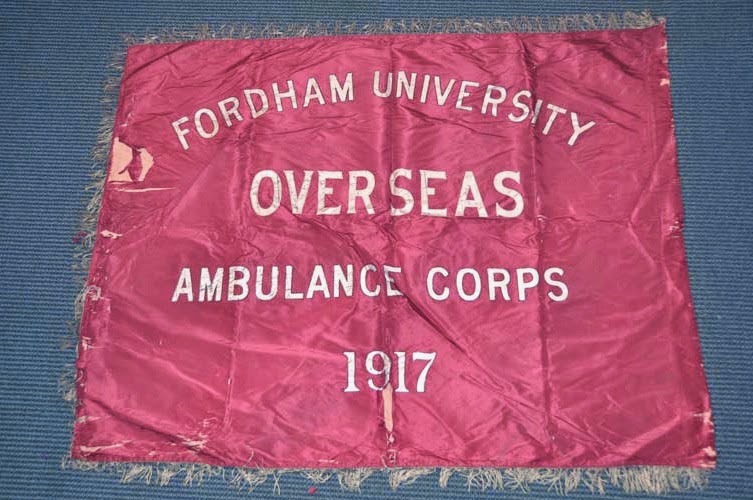