skip to main content
Return to Fordham University
You are at:Home»Campus Locations»Survey Shows Fordham Hitting Above its Weight in Student Outcomes

As a high school student aspiring to medical school, Juan Duran faced his share of hurdles—paying for college, for one, but also navigating an application process that was unfamiliar, to say the least.

“No one in my family is a doctor; no one is really in the health professions,” said Duran, a New York City native whose family immigrated to Queens from the Dominican Republic.

Students like Duran—now a Fordham graduate, Fulbright scholar, and Weill Cornell medical student—have long been a key part of the fabric at Fordham, given its history of serving first-generation Americans who come from modest means. But it’s not the sort of tradition that has tended to surface in rankings and surveys of American colleges and universities.

Until recently, that is.

In September, The Upshot—a New York Times feature—published a College Access Index of the most economically diverse institutions, chosen because their four-year graduation rates are at least 75 percent. In the index, which was based on schools’ numbers of  low-income freshmen and costs for low- and middle-income families, Fordham was ranked No. 71–ahead of many substantially better-endowed universities. (Fordham’s per-student endowment, in fact, placed toward the bottom of the index, at No. 90 out of 98.) The upshot? Fordham’s undergraduate support programs are highly successful.

“Investing money in our students, by itself, isn’t enough,” said Joseph M. McShane, S.J., president of Fordham. “I cannot praise the faculty, the HEOP and CSTEP staff, and the Campion Institute staff enough for their extraordinary devotion and diligence in working with these students. There is no better manifestation of cura personalis than the work they do, largely behind the scenes, day in and day out. That we attract a certain type of student to begin with—unassuming and hardworking—is also a part of our success, and theirs.”

The University’s student-centered approach has fueled notable successes in programs that support students from underrepresented backgrounds, and in other areas including law school admissions and prestigious fellowship awards.

One such program is the Collegiate Science and Technology Entry Program (CSTEP), a state-sponsored effort to increase minority representation in fields related to science, technology, engineering, or mathematics. The University generously funds the program—allowing it to accept both in- and out-of-state students—and locates it in the Office of the Provost, making it easier for the program to collaborate with deans and faculty members, CSTEP director Mike Molina said.

In May 2014, out of 47 Fordham graduates who went through the program, seven went to medical, dental, or optometry school; seven won fellowships, including a Fulbright; four went to graduate school; and four went to law school—at Columbia, Georgetown, Michigan, and Harvard.

The majority of the program’s students are first-generation college students and children of immigrants, Molina said. Duran went through CSTEP; he praised the program for its support system, its tutoring (which he both received and provided), and the guidance that helped him find research and enrichment opportunities.

“CSTEP was my academic family, but they were a real family in a way too,” said Duran, a student at Weill Cornell Medical College who studied neurobiology as a Fulbright fellow at the Cajal Institute in Spain. 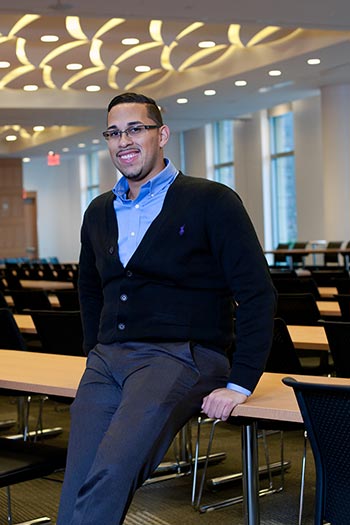 Duran said CSTEP’s focus on giving back has stayed with him.

“They were really good in teaching us how to assume a leadership role, leadership position, in our communities,” in part by talking to high school students about programs like CSTEP. “It was very good to kind of give a voice to students and say that these opportunities are available for you, (that) you could be pretty much anyone you want to be.”

HEOP—which Duran was also enrolled in—is a state program for independent colleges that offers support services to promising students whose economic and academic circumstances might otherwise keep them from attending. Students attend an intensive six-week college preparatory session in the summer before freshman year and receive tutoring and other forms of support.

As of fall 2012, the rate of HEOP freshman returning as sophomores was 90 percent at Rose Hill and 91 percent at Lincoln Center, about the same as the rate Universitywide. This retention rate is a consistently strong indicator of how many members of a class will eventually graduate.

The program’s success is bound up with the accessibility and support that the University offers students and staff generally, Vranich said. One Fordham HEOP graduate, John Loubriel, praised the program’s intangibles, like the sense of support that came from its counseling and advisement, as well as its “parent voice” that lets students know what succeeding at Fordham requires.

“They hold the door open for you, but it’s up to the student to walk through it,” said Loubriel, a Queens native who is now studying at Fordham Law School.

The number admitted to top-40 law schools has gone from 13 percent to 58 percent from 2009-2010 to fall 2013, and the overall acceptance rate has grown to 87 percent, 10 points above the national average. (The rate for students who apply as seniors is 94 percent.)

The increase comes from stepped-up efforts to educate students about the profession and get them thinking,

The number admitted to top-40 law schools has gone from 13 percent to 58 percent from 2009-2010 to fall 2013.
early and often, about their own reasons for pursuing law. Students are posed fundamental questions, Burke said: “Do you want to go to law school? Can you really answer the questions, ‘What does it mean to be a lawyer; what does the practice of law entail?’ If you can, you’re going to have a much better road toward applying to law school because you’ll be more informed and you’ll know why you’re going.”

Burke has arranged for more internship opportunities and on-campus speakers to help students discover what kind of lawyer they’d like to be—pugnacious litigator, say, versus collaborative deal-maker—and what specialties they prefer.

She also teaches a one-credit symposium on the legal profession for all pre-law students, and arranged for students to get free prep sessions for the all-important LSAT. The sessions are offered by PreProBono, a nonprofit that helps students from low-income and underprivileged backgrounds become public interest lawyers. Since 2009-2010, the college’s average LSAT score has risen 10 percentile points.

A similar student-focused approach has driven the sharp increase in prestigious fellowships and scholarships won by students—including low-income students and students from underrepresented groups—since 2003. When thinking of applying, students are encouraged to look past the prestige and ponder whether a fellowship program suits them and what they hope to get out of it. It’s a process reminiscent of the Jesuits’ spiritual exercises because of its focus on helping students discern what’s best for themselves, said staff members in the St. Edmund Campion Institute for the Advancement of Intellectual Excellence, which helps students apply for prestigious awards.

“I think our first duty is toward the student,” in light of the significant time and effort required to apply for a fellowship, said John Kezel, Ph.D., director of the institute.

Students may be encouraged to learn about the country where they’d be studying, for instance, or may be connected with a professor who can help them hone their research focus. It’s an approach that is not only good for students but also effective, noted Rebecca Stark-Gendrano, the institute’s Fulbright fellowships administrator.

“You’re going to write a much better application if you’re really passionate about the thing you want to do, and you’ve take the steps to make yourself qualified and you’ve done the hard thinking, and you are behind your application 100 percent,” she said.

Four times since 2003, for instance, the University earned a place among the top Fulbright-producing universities listed annually by the Chronicle of Higher Education because its students’ Fulbright awards reached double digits.

The University’s other efforts in this area since 2003 include bringing foundation representatives for campus visits and building a network of faculty members who can recommend potential applicants and write recommendations. “It takes a university to win these,” Kezel said.

Even students who don’t win an award sometimes find themselves lifted toward other achievements—such as scholarships for law school or medical school—by the rigorous application process and the self-examination it requires.

“I get thank-you notes” from unsuccessful applicants every year, Stark-Gendrano said. According to the institute’s assistant director, Maria Noonan, “They’re disappointed … but they tell us it’s been so worthwhile.”

Referring to a statement by St. Edmund Campion, Kezel said the institute’s motto is “to attain the prizes that your worth deserves,” in keeping with the spiritual exercises’ focus on using imagination to discern one’s goals and the steps required to attain them.

In addition to Fulbright fellowships, students have won Gates-Cambridge, Marshall, Truman, Jack Kent Cooke, and National Science Foundation awards—a well as the Merage Fellowship for New Americans—for postgraduate study at top-tier universities in the United States and the United Kingdom.