They were there to present their marketing ideas to 30 executives from the New York Giants organization. The presentation was a culmination of a study they did on ways to enhance the fan experience on game day and increase the appeal of the game to a younger generation.

The student team, known as the Giant Rams, featured Fordham College at Rose Hill sophomores Emma Kimble and Hayley Gregoire as well as freshman Demarice Rice-Williams, who is also a member of Fordham’s football team. The Gabelli School of Business was represented by sophomores Laura Anandappa and Matthew Reese and freshman Alexa Luther. 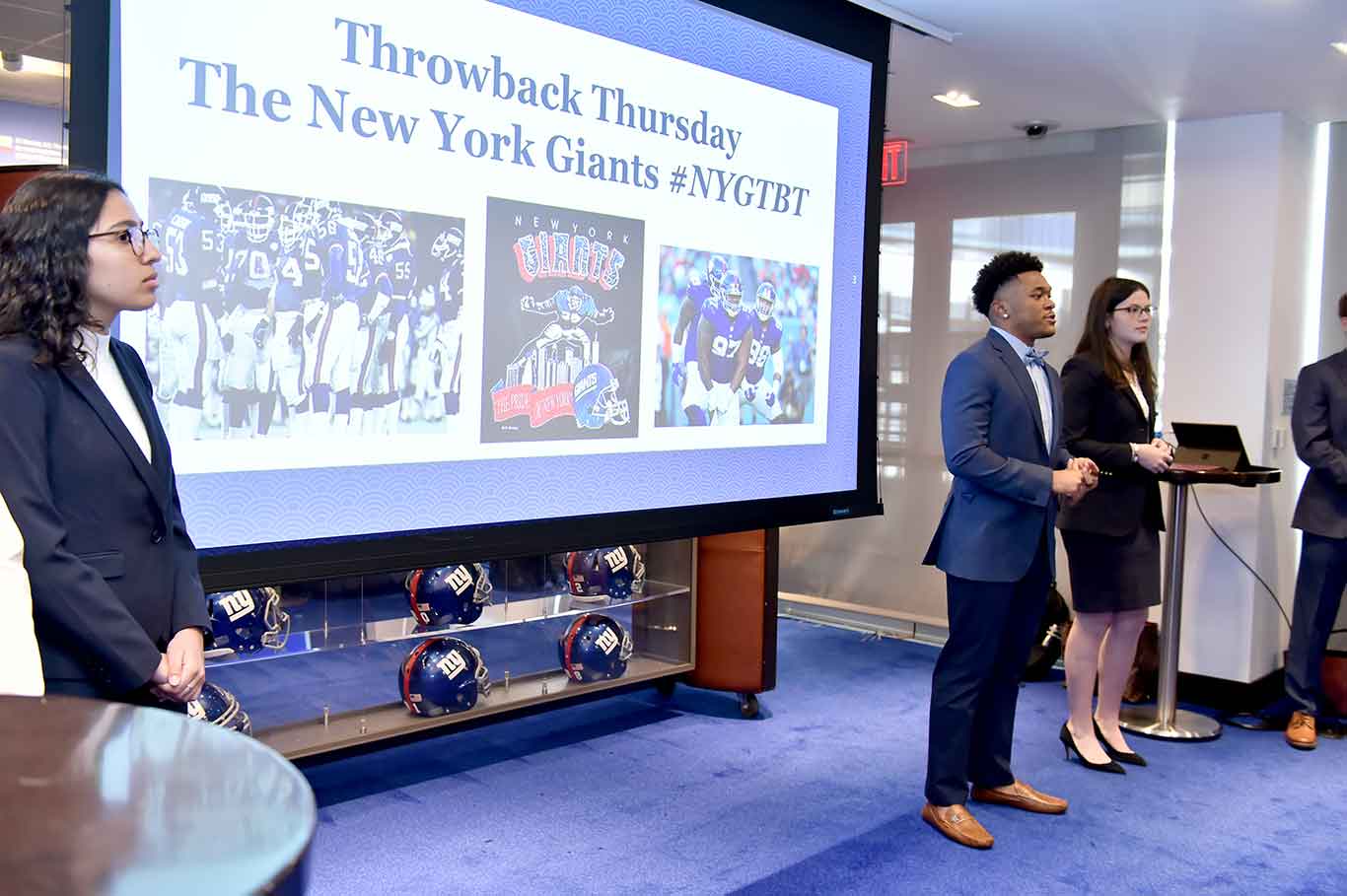 The students’ pitch, called “Throwback Thursday,” is connected to the elevation of past Giants’ triumphs.

The students pitched the idea of Throwback Thursday, which they connected to the elevation of past Giants’ triumphs. It features what is known as physical and digital “touchpoints,” said Kimble. That could be retro uniforms that fans can purchase or history-based trivia featured on the team’s social media accounts.

Kimble—an Austin, Texas, native—is currently one of the managers of Fordham’s football team and grew up watching Big 10 football with her father, who attended the University of Michigan. She recruited the other members of the team, which, rules stipulated, had to feature members from at least two different colleges.

“This may sound super cheesy, but it felt like the beginning of my future. This could be a big opportunity for my career,” said Kimble, an American studies and communications and media studies.

“I was scared because these are people I look up to, and I knew this was something I want to do, so there was that element of fear. But that translated into excitement when we pulled up it off.” 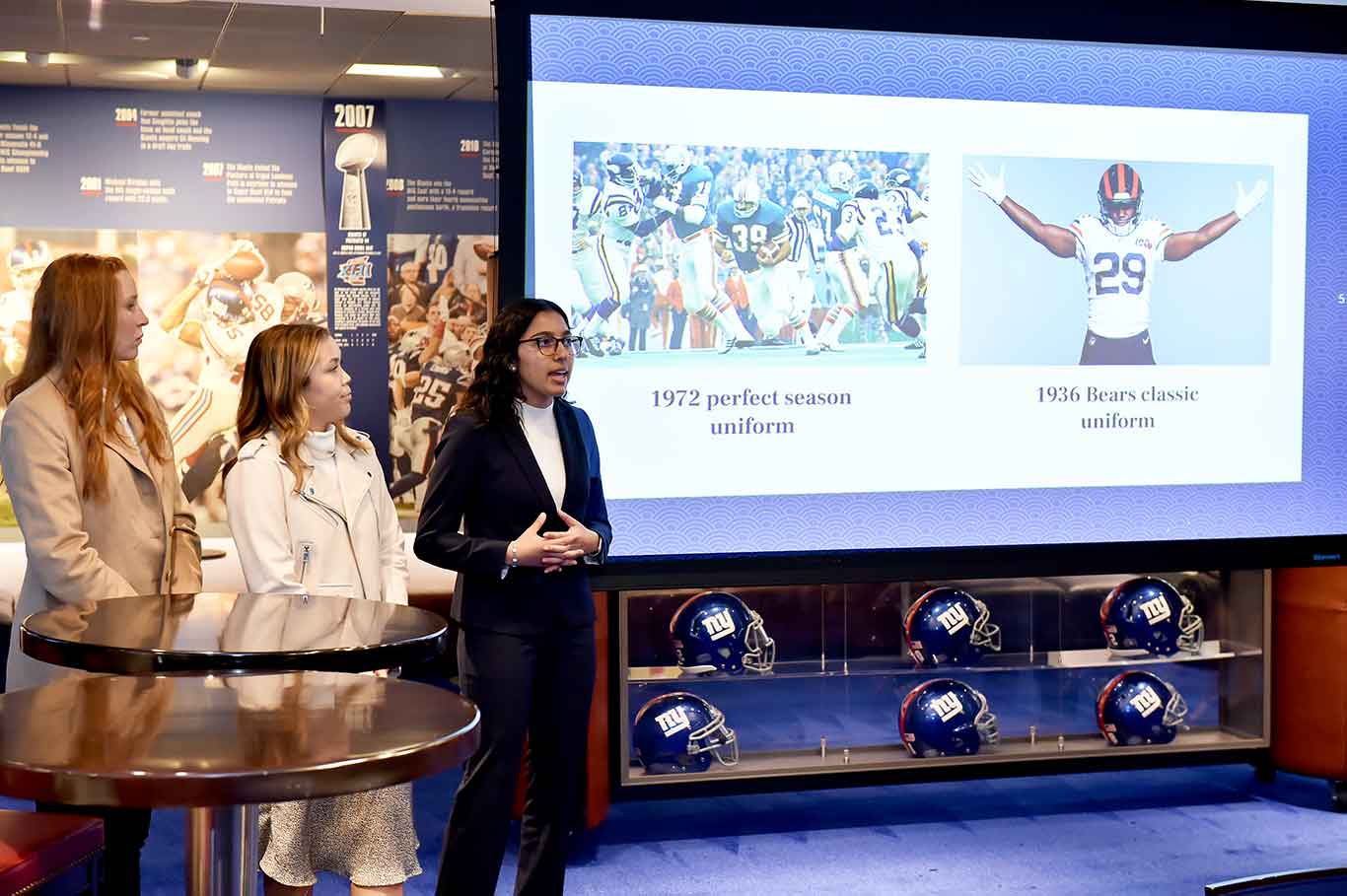 Before the students could share their thoughts on Throwback Thursday at the Legends Suite, they had to best four teams of their fellow students from Fordham’s four undergraduate colleges. After presenting their idea to a panel of Fordham administrators in early March, the winning team worked with Annette McLaughlin, director of career services, to tweak it based on the judges’ feedback.

At the stadium, they shared a PowerPoint presentation, fielded questions, and sat for a round-table-style Q&A with a select group of Giants executives.

Reese, a native of Weddington, North Carolina, who is majoring in information systems, played football in middle school and high school and is a fan of the Carolina Panthers and the New England Patriots. His team loyalty took a back seat to the opportunity to learn about the inner workings of a professional sports team though.

“When we won, it felt like, ‘Wow, this is legit.’ Going to MetLife Stadium and standing in front of a group of executives is going to be hard to replicate,” he said. 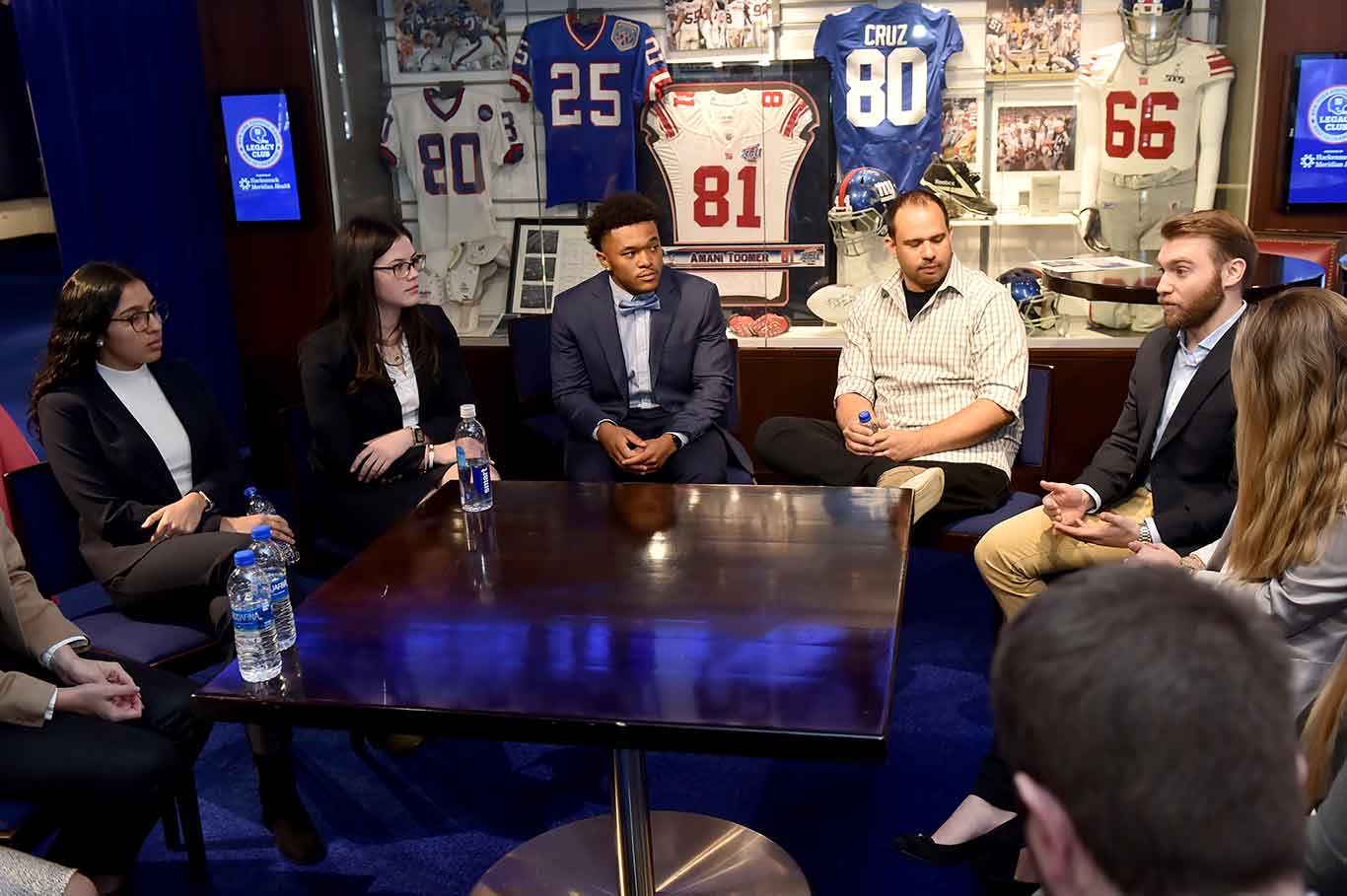 The presentation, which took place at the Giants’ Legacy Club, was followed by an informal round table Q&A session.

“A couple of the executives were like, ‘Hey, feel free to reach out; here’s my business card.’ I haven’t seen a business card in probably two years. It was just so nice to have that in-person interaction.”

Gregoire, a native of Baton Rouge, Louisiana, majoring in communications and Spanish, said working on the project gave her a better appreciation of the power of nostalgia. Although she has typically taken the lead on similar projects in the past, working as a team under Kimble was also gratifying, she said.

“It was really satisfying to do this massive project over three months, put in a lot of hard work and effort, collaborate with the team, and then present this really awesome idea and see the judges love it,” she said.

McLaughlin said the presentation was especially impressive given the fact that the work was not affiliated with any class the students were taking. 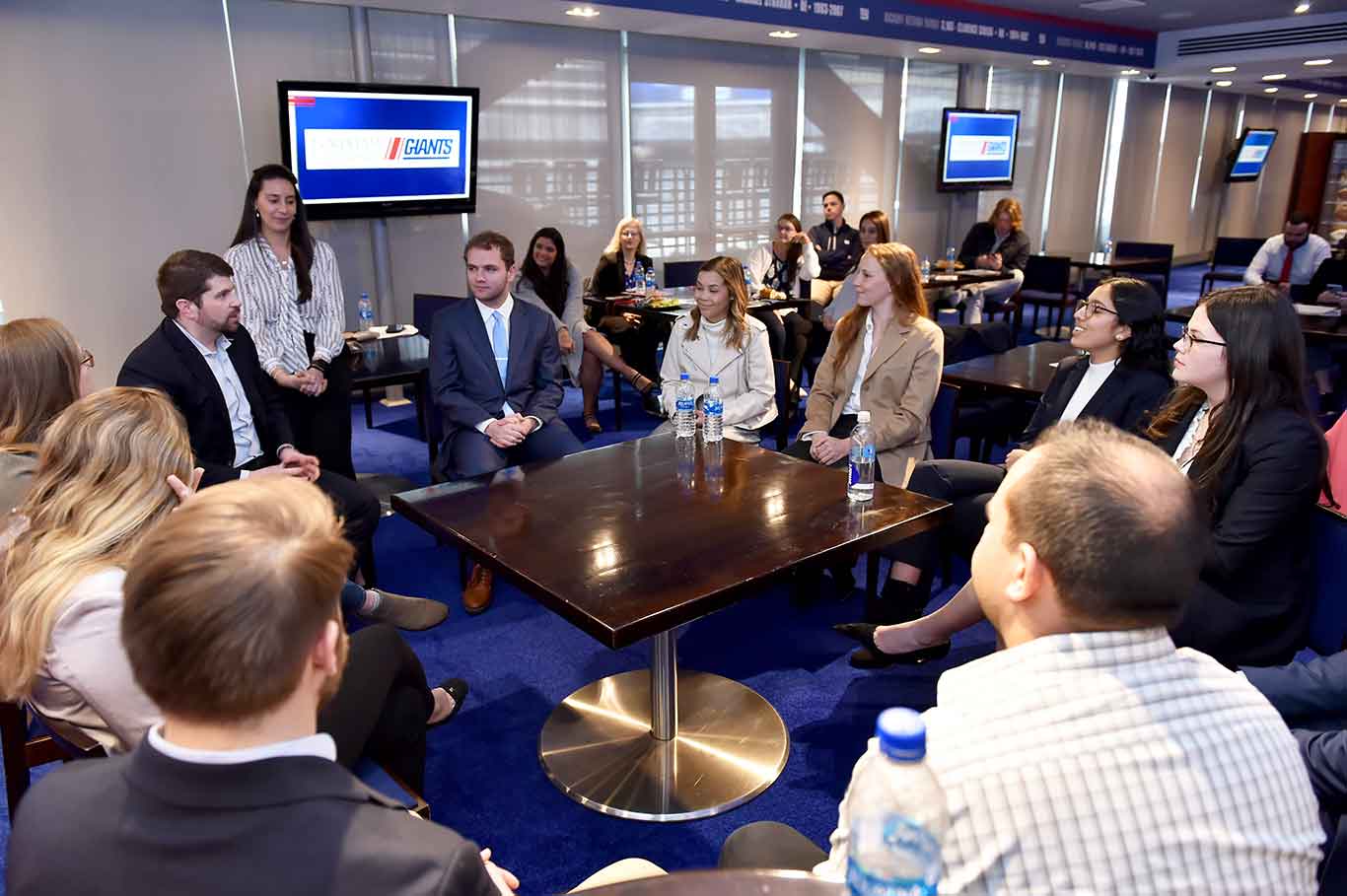 “I’m always just so impressed with the Fordham students and how they’re able to do the research and then have the presence to stand up in front of a group of executives and articulate their findings,” she said.

Even the students who don’t ultimately present their ideas to the Giants are getting something valuable out of the experience she said.

“All students who participate in the competition have a real-life experience they can put on the resume; they’ve done the research, created the presentations, worked as a team,” she said.

A Partnership that Goes ‘Above and Beyond’

The initiative was part of a partnership between Fordham and the Giants that kicked off in 2019 and most recently featured a joint service project to help residents of the Bronx affected by the Jan. 9 fire on East 181st.

McLaughlin said the partnership is a university-wide initiative that has been more than she’d hoped for.

“[The Giants] have gone above and beyond at every point. They come to career fairs, they join us for panels, this year they had the VP of business intelligence talk to students about data collection,” she said. 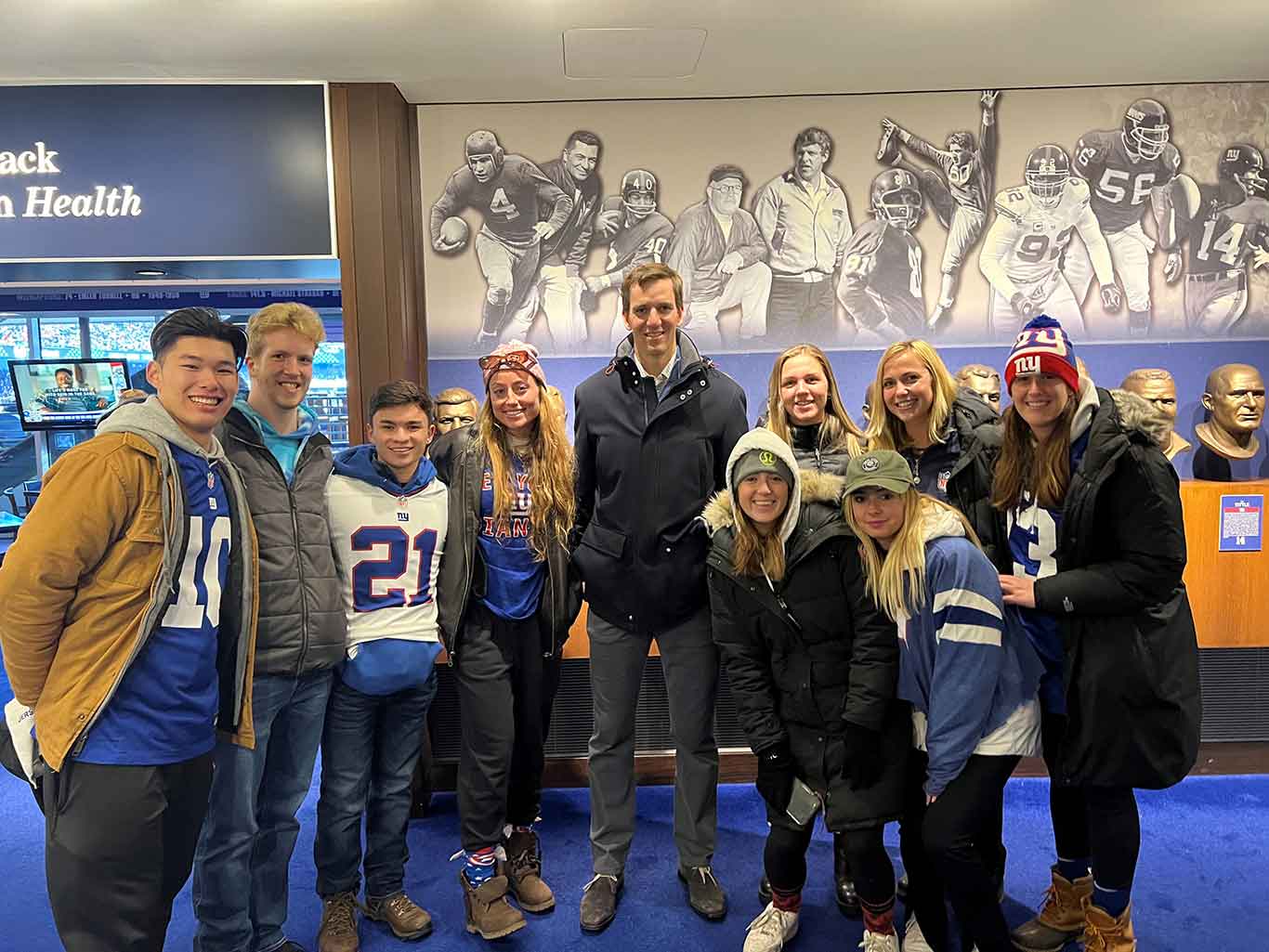 Winners of the 2019 case study visited MetLife Stadium in November 2021.

Amanda DiPane, manager of partnership activation for the Giants, said the case studies have been invaluable because students bring with them an outsider’s perspective. Tapping into nostalgia was an astute move, she said, given the fact that the team will be celebrating its 100th anniversary in 2025.

“The students were very thoughtful and answered all questions with ease in a manner that showcased the extensive research they conducted over the past few months,” she said.

“We love tapping into our team’s rich history and it was promising to hear that even the younger generation appreciates that as well.”

Kimble will be even more involved in those conversations going forward, as she will begin an internship with the team at the end of the month.

“This was probably one of the best experiences I’ve had at Fordham,” she said. 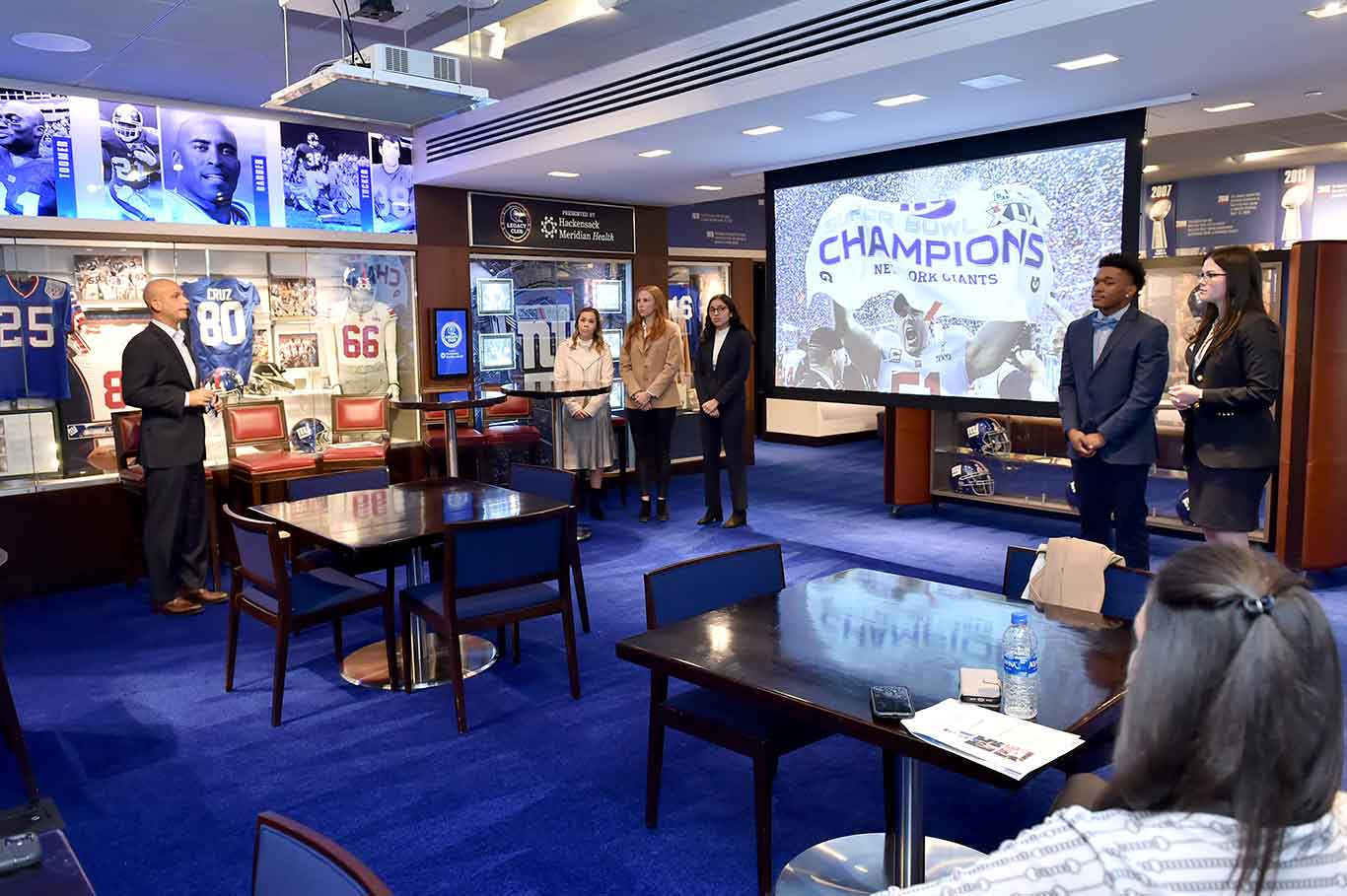 Pete Guelli, the Giants’ chief operating officer, thanked students for their presentation, which was the latest in a series of events and projects that Fordham and the Giants have worked on since establishing a partnership in 2019.