The state was North Carolina, and many of the people he met there were immigrants who had suffered greatly before coming to work at the cooperatives that he was visiting with other Fordham students. Listening to their stories “just put a lot of things into perspective for me,” he said.

Grullon is one of many students who spent their spring break with Global Outreach, Fordham’s service and cultural immersion program that runs projects—in the United States and abroad—that are centered on social justice and community engagement.

For Grullon and eight other students, the experience was a gift—quite literally. As students who came to Fordham via its Higher Education Opportunity Program (HEOP), they have high financial need. Except for the small portion for which they raise funds themselves, the students’ costs for the weeklong projects in North Carolina, Puerto Rico, and St. Thomas were covered by members of the Fordham University President’s Council, a group of accomplished alumni who mentor students and help advance the University.

By giving in support of the students, they were advancing a key priority of the University’s $350 million fundraising campaign, Cura Personalis | For Every Fordham Student—ensuring that the full Fordham experience is accessible and affordable for all students.

The experience in North Carolina was eye-opening for Grullon and other students. “The culture is so different,” he said, noting how open and friendly everyone was. They were visiting worker-owned cooperatives making a variety of clothing and, at the same time, learning firsthand about sustainable sourcing and ethical business practices.

Giovanni Alva, FCRH ’22, a Bronx native who is now a first-generation college graduate, said the work at the clothing cooperatives made him appreciate the exhausting textile work that his own parents performed in New York City after immigrating from Mexico.

“Being able to see it in person made me realize, so much, the sacrifices that they went through … to give me the opportunity to even attend Fordham and reach my potential,” he said. The workers in the co-op seemed grateful to have health care and other benefits, and to be able to become co-owners of the company, he said.

Grullon, a first-generation college graduate himself whose parents come from the Dominican Republic, said he met immigrants including a young Hmong woman who played a managerial role in one of the cooperatives. She had spent a lot of time healing from scars, both physical and mental, that she had suffered in an internment camp before coming to America. “There were so many people just telling us similarly tragic stories,” he said. “It just taught me that … everybody just has their own struggle in life, even though you don’t see it.”

He was happy to be able to bond with other students in a way that he hadn’t before, since he was a commuting student for most of his time at Fordham. “I got a lot of good friends because of this trip, and I don’t feel as alone as I did before,” he said. “And that’s a huge thing.”

A Gift of Experience

For the past few years, when he has visited New York City high schools to tell students about HEOP, Biswa Bhowmick, associate director of the program, has been telling students about Global Outreach as a way to show what Jesuit education is about and illustrate cura personalis—or care of the whole person—in action.

In fact, he said, “this is basically our dream, to make [Global Outreach] an integral part of the HEOP experience” for all who seek it. In 2018, Anne Williams-Isom, FCLC ’86, became the first President’s Council member to give in support of this goal, and others have since contributed, including Christina Luconi, PAR, and Christine Valentic, FCRH ’04.

After meeting with Bhowmick and learning more about HEOP, Valentic said, “I just really fell in love with the program and the idea of being able to give these students the experience that they might not have been able to have.” She knew what it was like to benefit from others’ giving, since her parish’s “adopt a student” giving program had funded her Catholic school tuition. At Fordham, she had wanted to take part in Global Outreach but hadn’t had the means.

The Global Outreach program has been growing its funding sources for students; today, it offers scholarships to about a third of participants, and students also organize fundraisers to cover a portion of the trips’ cost, said Vanessa Rotondo, assistant director of immersions and senior adviser on Ignatian leadership with the Center for Community Engaged Learning, which oversees Global Outreach.

Costs for the spring break trip ranged from $600 to $1,600 per student, which they can find daunting, Bhowmick said. When they learn that their share of the cost is much smaller, he said, “that really changes the whole perspective for them.”

One HEOP student, Najelly Almonte, who is going into her senior year at Fordham College at Rose Hill, first learned about Global Outreach during the summer before her first year at Fordham, and found that financial worries never took hold.

“HEOP has always been open to the idea, ‘If you want to do anything on campus, we will help you with the funding,’” she said. “It feels nice to have that support and feel like you’re not alone and, like, ‘Oh, I can’t afford this, I can’t do the same thing as everybody else in college.’”

Almonte was one of the students who went to San Juan, Puerto Rico, to help paint a mural on a middle school building that was being restored after hurricane damage. They worked with the Puerto Rican artist Pablo Marcano García on the mural, an illustration that celebrates the importance of teachers and the past, present, and future of education. 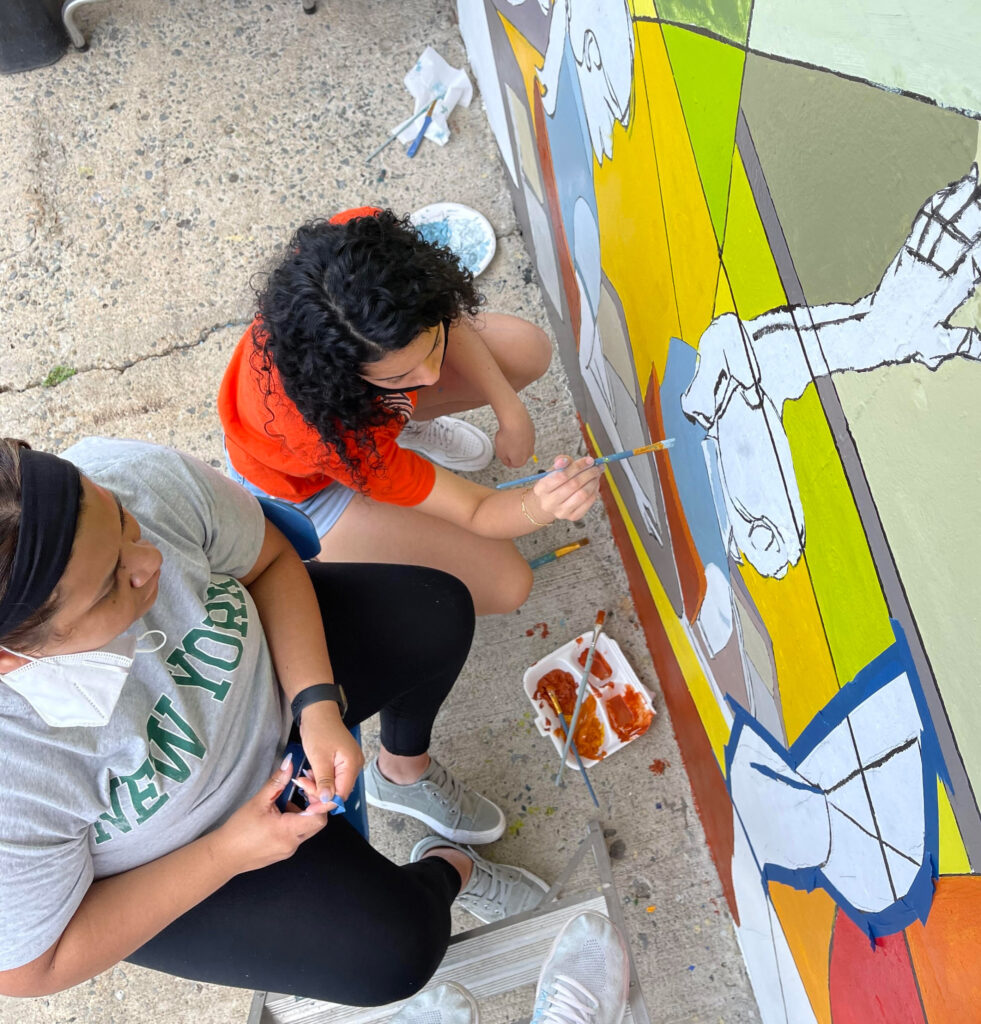 Meanwhile, the teachers at the school were on strike, which the students learned was “a regular thing,” said Cira Merlin, a participant who is going into her junior year at Fordham College at Rose Hill. “As we were painting to show teacher empowerment, how important these teachers are … they’re fighting for their pay,” she said.

The students were hosted by APRODEC, a nonprofit corporation that promotes local, sustainable economic development. They had the chance to tour historic sites, talk with students at the school, and learn about local culture and Puerto Ricans’ pride in their heritage.

Because of the project, she said, “I would say my love for education really grew.”

To inquire about giving in support of the Higher Education Opportunity Program, Global Outreach, or another area of the University, please contact Michael Boyd, senior associate vice president for development and university relations, at 212-636-6525 or mboyd7@fordham.edu. Learn more about Cura Personalis | For Every Fordham Student, our campaign to reinvest in every aspect of the Fordham student experience.