skip to main content
Return to Fordham University
You are at:Home»Editor's Picks»Students Begin Building a ‘Virtual Fordham’ on Minecraft
Screenshots courtesy of Christopher Vicari
In a new project known as RamCraft, Fordham students are virtually reconstructing the Lincoln Center and Rose Hill campuses on Minecraft, a popular 3-D video game.

“I’m meeting people who I would have never been able to meet in other ways from both campuses, and I’m watching the things that I see every day coming to life in a virtual world,” said Zoe Demacopoulos, a senior at Fordham College at Lincoln Center who helped build the virtual entrance of Lowenstein Center. “It’s nice to know that I can still build community and hang out with people on a semi-regular basis [during the pandemic].”

The goal of the project is to engage students, especially the first-year class, during a year that has made social activity more difficult than usual, said Patricia Peek, Ph.D., dean of undergraduate admission.

A Way to Connect

“When we learned last summer that other colleges had these fun images, we thought that it might be a great way to create a virtual Fordham while giving new students a way to engage with each other in a virtual space,” Peek said. 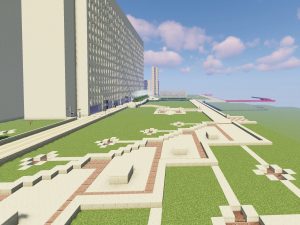 The landscaped plaza at the Lincoln Center campus

After months of planning, RamCraft began in earnest this spring. The project is a collaborative effort among student volunteers and the Department of Communication and Media Studies, with the support of Fordham IT, Peter A. Stace, Ph.D., senior vice president for enrollment and strategy, and Eva Badowska, Ph.D., dean of the faculty of arts and sciences and associate vice president for arts and sciences.

On Wednesday evenings, the student design team logs onto Minecraft and works on Fordham’s virtual Lincoln Center campus. (Design of the Rose Hill campus will begin this summer.) They communicate through Discord, a free chat service that is popular among gaming communities, where they can hear each other’s voices and watch each other stack virtual blocks in real time.

The underlying purpose of these meetings is to create an inclusive, supportive community where students can connect through a fun activity and escape from the stress of the pandemic, said the faculty project manager, Christopher Vicari. 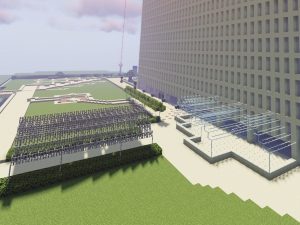 Close-up of the building architecture

There are 10 to 15 students working on RamCraft, ranging from beginners to longtime players who were introduced to the game when they were children. Among them is Demacopoulos, a senior at Fordham College at Lincoln Center who plans to start at the Graduate School of Education in the fall on the 5-year track. The aspiring high school English teacher has played Minecraft since the game was released in 2011. It used to be a fun way for her, as a New York resident, to bond with her long-distance childhood best friend from Massachusetts for nearly seven years. Now the game is serving a new purpose.

Demacopoulos and her classmates have been “building” since March, selecting block styles and ratios based on blueprints from Fordham Facilities Management, images from Google Earth, and photos of campus shot on their smartphones, said Vicari.

The digital version of the Lincoln Center campus

“Some students have gone to campus to take pictures of different elements of the architecture and floor patterns so we know how to match it as one-to-one as possible,” said Vicari, who has also visited campus to take photos. “Our goal is to be a little OCD and to try and get it as accurately as we can. But that’s where we’ll most likely have the most fun, too, because we get to flavor things individually.” 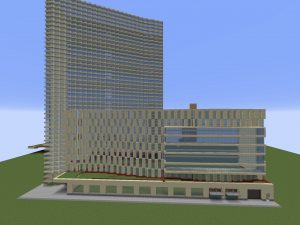 The RamCraft team has finished building the exterior of the Lowenstein Center, McMahon Hall, and Columbus Avenue. Next up are McKeon Hall and the Law School.

The team is deliberating on how far away the virtual Lincoln Center campus should be from the Rose Hill campus. They have yet to complete the most difficult tasks—the interiors of each building, including the Lowenstein lobby. The overall project won’t be finished for at least two more years, Vicari estimated. But so far, the project has accomplished something more poignant during a difficult year. 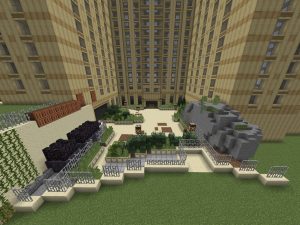 “One of the big issues of the pandemic was finding a social circle or a group of friends in a university,” said Preeti Grewal, a first-year student at Fordham College at Lincoln Center who is studying remotely from Queens. “You’re starting off in a brand new place, and you don’t really know anyone. But I’ve been able to play Minecraft, study, and manage to make friends.”

At the end of her four years at Fordham, Grewal will also have a special project in her portfolio.

“There were a lot of murals in my old high school. All the names would be on the bottom left with ‘Class of 1993’ or something,” said Grewal, a political science student on the pre-law track. “That’s going to be us, but on Minecraft.”

The students’ Minecraft avatars in front of McMahon Hall