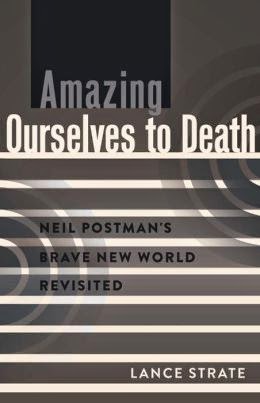 Several people who have read Lance Strate’s new book have described it as a “love letter” to his late mentor, the media ecologist Neil Postman. In the just-releasedAmazing Ourselves to Death: Neil Postman’s Brave New World Revisited, (Peter Lang, 2014) Strate, professor of communication and media studies, riffs on more than just the title of Postman’s seminal book,Amusing Ourselves to Death, which analyzed the way broadcast television, affects politics, journalism, education, and religion.

Strate’s book sets the stage for his academic peers to explore Postman’s theories in today’s new media. Postman explored television landscape in the mid-1980s before cable radically changed the nature of TV, whereas Strate’s book considers the same theories in light of the vast expansion of channel offerings and new networks via cable and satellite, and the addition of the Internet and world-wide web.

Regardless of the time period, Strate said electronic media are all interrelated. But how they have an effect on our democracy seems to have increased exponentially. He noted that the 18th-century leaders struck a healthy balance between the written and spoken word. They were great readers, which informed them to be great rhetoricians.

“Our country was founded by literate individuals and ours is a country that was argued into existence,” he said.

Postman wrote that the image-saturated electronic media eventually undermined reading-and-rhetoric, as electronic media’s emphasis on image elicits an emotional and irrational response. Strate broadens the focus to include the Internet’s speed and immediacy, which he said creates information overload.

“Speed, efficiency, and the overemphasis on technology—where only efficiency matters—puts us into what I call ‘hyper-irrationality,’” he said “Efficiency is a numbers game that takes us away from the balance of literate and oral.”

Postman and Strate argue that such a balance is the very basis of American culture.

When new media first arrived its emphasis on text spurred hope of a new generation of literacy. But now that the net has become increasingly visual, Strate says a “telegraphic discourse” has come to dominate.

“The Internet intrudes in so many ways that even at a church people don’t turn their phones off,” he said. “How do you get a sense of the sacred when we’re just a click away from something else?”