skip to main content
Return to Fordham University
You are at:Home»University News»Staff Honored with 1841 Awards for Commitment, Dedication to Fordham
Photos by Dana Maxson
Esther Morgan, executive secretary in the physics department, has been a part of the Fordham community for the past 40 years. She started in 1979 as a secretary in the Graduate School of Social Services.

In 1989, the physics department had a sudden opening.

Since then, Morgan, who also earned her bachelor’s degree in psychology in 1995 from the School of Professional and Continuing Studies, and a master’s degree in social work in 2003 from GSS, which she has used to provide counseling services for children at a community center after-school program in Stamford, Connecticut, has never left. 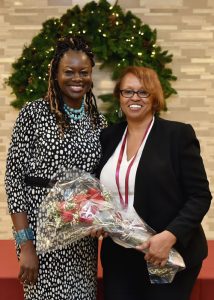 Esther Morgan, (right) executive secretary in the physics department, poses for photos after being recognized at the 1841 Awards.

“It’s the longest tenure I’ve had and I like all the faculty and hopefully they like me,” she said. “They really keep me going. It’s like home away from home. I always tell people, ‘I’m leaving home to go home.’”

Morgan was one of 12 members of Fordham’s support staff, facilities team, and custodial staff who were honored at the 1841 Awards ceremony on Nov. 18. The awards, which got their name from the year Fordham was founded, aim to recognize the day-to-day operations employees who have worked at the University for 20 or 40 years. This year, which had 16 award winners, was the 37th year of the celebration.

“You are the men and women who for 20 or 40 years—I can’t believe the 40—have really been the strength of the university, the people who do the jobs behind the scenes that make it possible for our students to grow, our faculty to shine,” Joseph M. McShane, S.J., president of Fordham, told the award recipients.

Father McShane said people often ask him, “What is Fordham?”

“I say, ‘wrong question.’ Fordham is not a what. It’s a who,” he said. And today, every year, this time of year, we get a chance to tell the world who Fordham is and you are Fordham.”

This year’s recipients included staff members who had earned their Ph.D., those who started at the University when they were just teenagers, and those who were ready to embark on their next chapters. 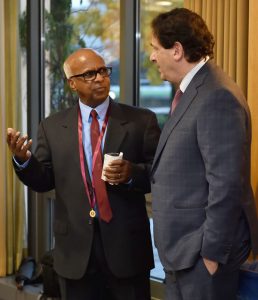 Ed Matthews (left) talks with Matthew Diller, dean of the law school, at the 1841 Awards.

Awardee Edward Matthews runs the Fordham Law mailroom. According to his children, Matthews takes skills from his home life and brings them to work.

“He does treat Fordham like his second family, the care and love he gives to his family, I think he applies it at work,” said his son, Bernard Matthews, executive director and chief technology officer at Fordham Law School. “He tries never to miss a day and he really is dedicated. Even on the weekends, holidays, he gives his time to come in because he doesn’t want to return to a deluge of mail piling up for him. He knows how important it is for faculty members that are publishing, the law clinic which is a 24-7 operation, he understands the mission’s important.”

Matthew Diller, dean of the law school, said that Matthews is known for his dedication and commitment.

“No amount of schedule change, room adjustment, mechanical failure, or crisis, real or imagined, altered his dedication to competence, hard work, and professionalism,” he said. “He is a true joy to work with.”

Jose Brea, a Rose Hill custodian, got his start at Walsh Family Library, where he spent years cleaning the study lounges and the lobby’s floors, according to Marco Valera, vice president for administration. 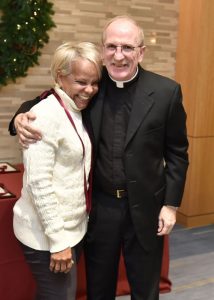 Dorcas Cabrera poses with Joseph M. McShane, president of the University at the 1841 Awards.

“Each year, when we start our preparation for Commencement in Keating, José steps up to help us prep the building to perfection. He takes charge and always ensures that the floors are flawless.”

Father McShane said all of the recipients had unique talents and dedicated them to the University to help make it a special place.

“You really are the people who make the University who it is, what it is, and you make it shine,” he said.