skip to main content
Return to Fordham University
You are at:Home»Athletics»Sophomore Secures National Title in Taekwondo and Heads to World Championship 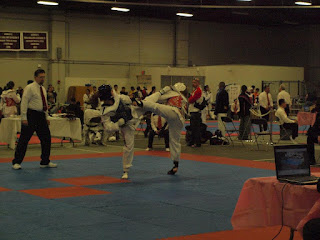 Alexandra Cinque (in blue) faces off in a taekwondo fight.
Photo courtesy of Alex Cinque

Alexandra Cinque might seem like a typical college student, battling schoolwork and conquering exams—but there’s a lot more fight to her than meets the eye.

Cinque, a sophomore at Rose Hill and a third degree black belt, recently competed against athletes from over 100 colleges at the National Collegiate Taekwondo Championships, held at the Massachusetts Institute of Technology.

She secured the gold medal and, with it, the national title.

In May, Cinque will travel to Pocheon, South Korea to represent the United States in the World University Taekwondo Championships.

“I’m so excited about this win at collegiate nationals,” said Cinque, who has been practicing taekwondo since she was 5 years old. “I’ve won other national titles before, but this great because I actually get to represent Fordham, too.”

Her latest title joins a long list of achievements in taekwondo. Cinque, who hails from Ossining, N.Y., has been on the U.S. national team twice and in 2009 won the Pan American championships, held in El Salvador. She has also won several state, regional, national, and international competitions.

“I love taekwondo because it teaches me discipline and a great work ethic,” she said. “And although athletes compete in events individually, I love the team camaraderie and visiting new places.”

Victory, though, does not come without hard work. Cinque typically trains up to four days per week, and when a major competition is approaching, she increases her training regimen to six days per week.

“One of the most challenging parts of doing taekwondo is the sacrifice and the time needed to reach my goals,” she said. “My taekwondo school, Kixx Martial Arts, is all the way in Little Falls, N.J., and I go three days during the week and on weekends, too. It takes a huge chunk out of my day, so it’s hard to manage that plus schoolwork, a job, clubs, and a social life.”

Cinque said she also must always be mindful of her physical fitness, since competing in the middleweight group requires her to maintain a certain weight.

“It’s really hard to be in the cafeteria, on Arthur Avenue, or at Pugsley’s and not eat everything in sight,” she said.

Nevertheless, the strain and sacrifice of intense training are worth the ultimate goal.

“Besides hopefully winning… I really hope [this experience]will be another positive step toward my goal of eventually going to the Olympics,” she said. 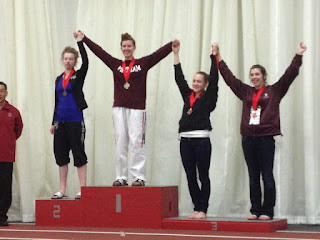