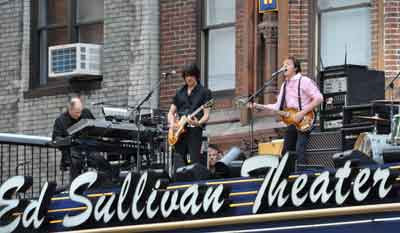 Having to work off-campus paid off yesterday for a few employees in Fordham’s Office of Development and University Relations (located on 57th Street) when they were able to rush over to 54th and Broadway after work in time to catch a free, unannounced concert atop the marquis of the Ed Sullivan Theatre by Sir Paul McCartney.

McCartney, who was a guest on Late Show with David Letterman, performed a seven song set for hundreds of New Yorkers who got wind of the event through blogs or Twitter, or who happened to pass by at just the right moment. No surprise that someone on the communications staff had a camera.

A few Pedicab drivers pulled over to take in the show. Yellow taxis and cars, however, were waved on by police, and had to catch Sir Paul’s performance on the televised show later that evening.