For the students, it was a chance to express gratitude toward the people who helped make their education a reality. Thanks in part to their generosity, Faith & Hope | The Campaign for Financial Aid is less than $10 million away from reaching its $175 million goal. And for the donors, the evening offered an opportunity to hear from the students whose lives were changed by their gifts. 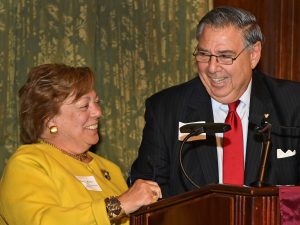 “It is through your giving that a difference is made in the lives of our scholars,” John R. Costantino, GABELLI ’67, LAW ’70, said to the donors in the University Club’s Main Dining Room. Then he and his wife thanked the younger guests—the students who had become more than just “scholarship recipients.”

“We have been to [their]  graduations, weddings, christenings, and had the good fortune to watch our scholars grow, mature, and succeed,” said Barbara Costantino. “In many ways, this is an extension of our family.”

A Dream Made Reality

This year’s student speaker was Elena Comas Wood, FCRH ’21, the recipient of the Jane M. Flaherty Scholarship. Today, Wood is a political science major and Arabic minor from San Antonio, Texas, who plans to pursue a career in public policy. But when she was a child, she had a different idea.

“I first declared my intention to be president at only 5 years old,” Wood said, to laughter from the audience. “This dream—the dream to be a catalyst for meaningful change—was born in my pre-K classroom where, between lessons on the alphabet and finger painting, my very first teacher taught us about India’s independence movement, the civil rights movement, and environmental activism.” 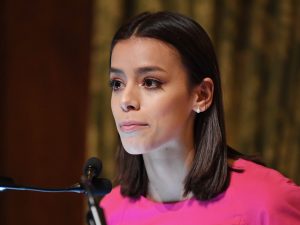 Elena Comas Wood expresses her gratitude toward the Flaherty family.

As she grew, so did her passion for public service. In high school, she served as under-secretary-general of external affairs at one of the largest student-led Model United Nations conferences in the country. Today, as a second-generation Mexican American, she mentors Latina middle school students through Fordham’s Club Amigas/Mentoring Latinas program. And last summer, as a policy intern for Texas State Representative Diego Bernal, she watched two of her policy memorandums become house bills to help homeless and hearing-impaired students.

“Representative Bernal frequently joked that they only brought me onto the team because he always wanted to go to Fordham,” Wood said. “But in all seriousness, it was Fordham’s widely recognized reputation for social interest, along with its network of professors, administrators, and alumni, that made each of those opportunities possible.”

There was one more “instrumental” factor: the Jane M. Flaherty Scholarship.

“Earlier this year, my parents and I had a frank discussion about whether or not I would be able to finish my undergraduate degree at Fordham,” Wood said. “I am quite literally in front of you today, a Fordham student, thanks to the Flaherty Scholarship. It is because of you that I do not have to choose between affordability and my dreams.”

The Woman Behind the Scholarship

Jane M. Flaherty, who passed away last February at age 71, never attended Fordham. But she had great love for the University.

“She spent a lot of time here with me while we were dating, before we got married,” said her husband James P. (Jim) Flaherty, FCRH ’69, a Fordham trustee. “We got engaged the night of our senior prom.”

Jane Flaherty was a native New Yorker who was devoted to her husband, children, and 10 grandchildren. She was proud of her Catholic education, and the education her husband received at Fordham. There were two University events she really loved, said her husband: the annual Festival of Lessons and Carols at the University Church and this scholarship reception.

“They would give her a table, but they’d have 10 people around it, and she’d be surrounded. And I would just leave, ’cause I wasn’t serving any purpose,” Jim said, smiling as he recalled the memory.

For Jane, it was always a delight to speak with her scholars face-to-face at the annual reception.

“When I meet my students, I’m filled with joy,” Jane Flaherty said at the 2016 event. “It’s like I’m meeting my children.”

Finding Fellowship in STEM and Life

Mary Jane F. McCartney, TMC ’69, has met many student scholars. But Sophie Cote was the first one who Googled her before they met in person.

“I discovered that at Con Ed, she was the first female in like four different high-level positions, and I just think that’s the coolest thing ever,” gushed Cote, a first-year math and economics student at Fordham College at Rose Hill interested in the technology and energy sectors. “And this is really similar to what I want to do with my career.”

Cote isn’t a recipient of any of McCartney’s scholarships. She is a Cunniffe Presidential Scholar who was impressed by McCartney’s resume and met her at the reception.

McCartney also spoke with one of her scholarship recipients, Rodolfo Keesey, FCRH ’20, an integrative neuroscience student whose research includes gene expression and 3D printed prosthetic hands. A few weeks ago, McCartney and Keesey first met at the Rose Hill undergraduate research symposium. Recently, she helped him secure an undergraduate research grant for this summer, he said. 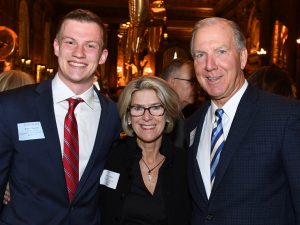 The Stones with Robert Magrino, GABELLI ’20

A few paces away, Bob and Sue Stone, PAR ’15, were engrossed in conversation with the recipient of their scholarship, Robert Magrino—a Gabelli School of Business junior studying business administration.

“We come to this event every year. Rather than writing a check, which is easy to do in terms of time, coming here is a chance to find out where the money is going and if it’s helping,” Bob Stone said. “And clearly, it is.”

“The way they were talking to me, they made it seem like I could go to J.P. Morgan or Morgan Stanley,” Magrino said in a private conversation. “Hopefully, that will come true.”

A Toast to Fordham

As the evening drew to a close, Joseph M. McShane, S.J., president of Fordham, lifted his glass and announced a three-part toast.

“I propose a toast first to the students, whose hopes give us great joy, who point us to the future and make us smile and make us young again,” he said. “To the young saints.”

Father McShane dedicated his second toast to the “mature saints” who make it possible for the young saints to shine. His final toast, however, was for the 178-year-old institution that had brought them all together.

“That place where talent is tested, character is nurtured, and hope is born in every generation,” Father McShane said, raising his glass to the sculpted ceiling. “To Fordham.”

“To Fordham,” they echoed. 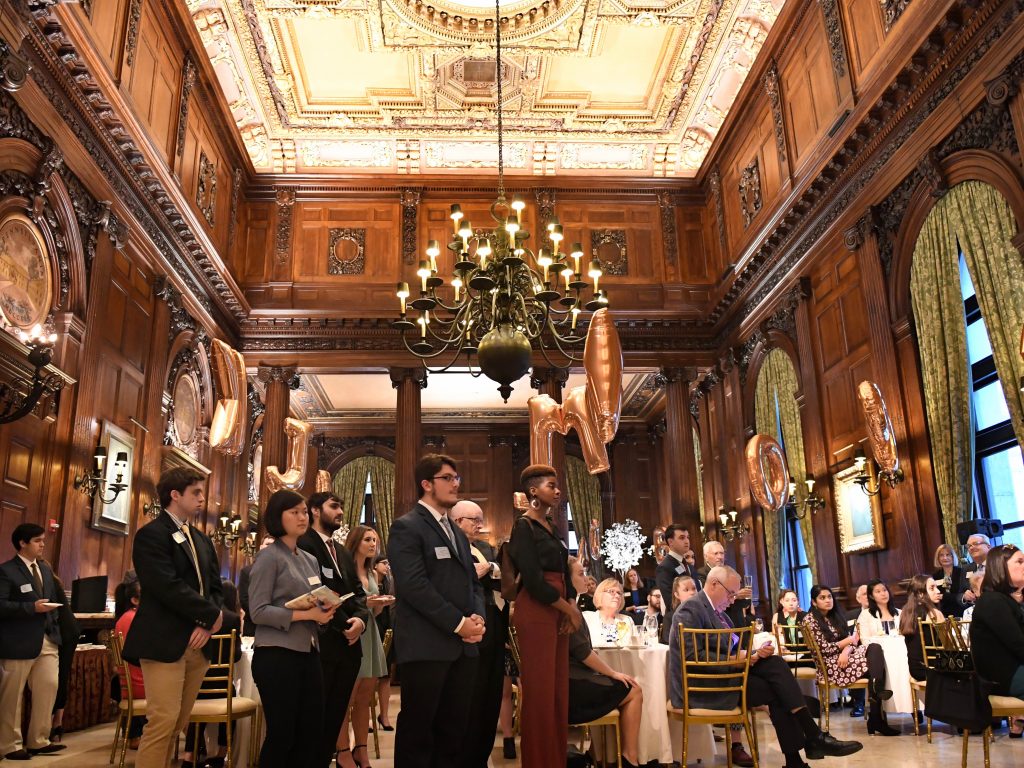 Scholarship recipients, donors, and guests at the University Club