skip to main content
Return to Fordham University
You are at:Home»Athletics»Saving The Planet One Trip at a Time 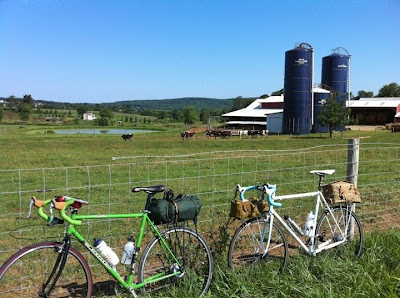 Jason Aloisio, a Fordham graduate student in biology, has parked his bike for the time being, but not before pedaling 400 miles to help save the planet.

Aloisio and Anthony Grizzi, a pharmacology graduate student at Thomas Jefferson University, left Fordham’s Rose Hill campus on Friday, July 30 to bike all the way to the 2010 Ecological Society of America annual conference in Pittsburgh, PA., which runs through Aug 6. They arrived three days later, on Monday evening, Aug. 2.

The theme of this year’s conference is global climate change, so Aloisio and Grizzi could think of no better way to make the point: they estimate that their decision to bike rather than drive saved approximately 420 lbs. in carbon dioxide emissions.

“We share two major passions; exploring the world . . . and seeking to better understand it,” said Aloisio. “We not only fuse these passions by viewing the countryside through a new perspective and gaining new insights at the ESA conference, but also bringing awareness to a global issue.”

The pair traveled through three states and climbed over 15,000 vertical feet. Along the way, they overcame five flat tires and “met lots of nice people, including a personal performance from some musicians in Gettysburg.” 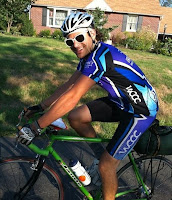 Aloisio, who is in his second year of graduate school, is doing his research on rooftop ecology, studying green roofs as a way to integrate both function and biodiversity. Unfortunately, the need to complete his summer research means he can’t take three days to bike home. But, he is still doing his part by carpooling back with three other Fordham students.