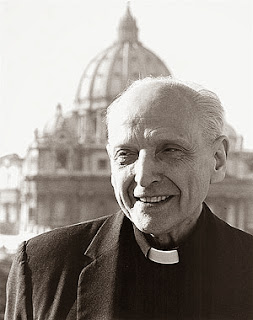 Born in in the Basque region of Spain, Father Arrupe is known for his work as a missionary in Japan during the mid-20th century. He was sent to the country in 1938, and in 1945 moved to Nagatsuka, just outside of Hiroshima, to become master of novices at a Japanese mission.

He was in Nagatsuka on Aug. 6, 1945, when the atomic bomb was dropped on Hiroshima, annihilating the city. Having received medical training in Spain before becoming a Jesuit, Father Arrupe attended to as many of the wounded as he could. He and his colleagues gave shelter to 150 victims in their mission, offering food and medical treatment.

In 1965, while serving as Superior of the Japanese Province, Father Arrupe was elected Super General of the Society, a position he held until 1983. During this time, he helped guide the Jesuit community through Vatican II, a turbulent time for the Society. He emphasized a spirituality of engagement and the Jesuits’ obligation to address the needs of the poor, which resulted in the Society working in more hands-on ways with poor communities, especially in Latin America.

This same mission drives Jesuit education, he said, insofar as the “prime educational objective must be to form men and women for others.”

To read more about Father Arrupe, including his arrest and imprisonment shortly after the bombing of Pearl Harbor, read the article by Loyola Press’s Ignatian Spirtuality page.

Nothing is more practical than finding God,
than falling in Love in a quite absolute, final way.
What you are in love with,
what seizes your imagination,
will affect everything.
It will decide what will get you out of bed in the morning,
what you do with your evenings,
how you spend your weekends,
what you read,
whom you know,
what breaks your heart,
and what amazes you with joy and gratitude.
Fall in Love, stay in love, and it will decide everything.