skip to main content
Return to Fordham University
You are at:Home»University News»Psychologist Olivia Hooker, Defiant Champion of Civil and Human Rights, Dies at 103
Photo and Video by Tom Stoelker
Olivia Hooker, Ph.D., professor emerita of psychology, who survived one of the nation’s most violent racist attacks and would go on to become the first black woman to serve in the United States Coast Guard, died on Nov. 21 at her home in White Plains, New York. She was 103.

“Dr. Hooker was indeed a pioneer, but she was so much more than that,” said Joseph M. McShane, S.J., president of Fordham. “She served her country and went on to serve generations of Fordham students as a professor, mentor, and role model. That Dr. Hooker did this despite formidable racial and gender barriers only highlights her talents and accomplishments. Our hearts and prayers are with Olivia Hooker’s loved ones.” 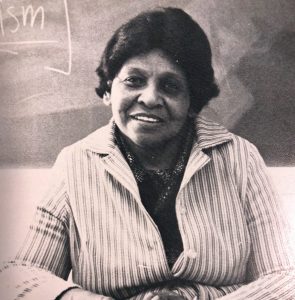 In an interview with Fordham News shortly after her 100th birthday, Hooker credited her longevity to a healthy lifestyle and keeping a positive outlook—despite bearing the brunt of ignorance and bigotry through most of her life.

“I think being able to let things go and not dwell on the bitter things helps a person,” she said.

She witnessed the racially motivated attack that devastated her neighborhood, a middle-class black enclave in Tulsa, Oklahoma, in 1921. Her mother hid her and her three siblings beneath a table as white men destroyed their home and smashed the piano on which her sister practiced Bach.

The incident was often referred to as the Tulsa  race riots, though Hooker spent a lifetime correcting the official record of the events; she called the attacks “the disaster,” not “the riots.”

“It wasn’t a riot; we were really the victims,” she said.

Official estimates of people killed in the disaster ranged from 100 to 300. Her father, who owned a department store destroyed in the wreckage, moved the family to Topeka, Kansas, but returned to Tulsa to rebuild his business.

Yet even in light of the violence, Hooker remained continuously surprised by prejudice throughout her life. After the family arrived in Topeka, she and her siblings wanted to see a popular movie that had just opened. She asked her mother for quarters to see the movie, telling her that the sign on the theater said “all children allowed.”

“The manager came out and plucked us out of the line,” she said. “The sign said ‘all children’ and we were children, we had our quarters, and he said, ‘You’re not welcome here.’ That was startling to me.”

A First for the Coast Guard

In spite of barriers, Hooker held several demanding careers, all of which took some form of service. She began as an elementary school teacher after getting her bachelor’s degree at Ohio State University.

She would go on to become the first black woman to serve on active duty with the Coast Guard, which operated under Navy command during World War II. At first, she received two rejection letters “saying there was a complication” with her application. She then aimed her efforts to the top, writing to the secretary to the Navy who replied that she was more than welcome to join.

“We worked so hard to get them to invite us in, so I thought someone should go,” she said. “I thought, ‘Perhaps, if I go, and if I live, maybe some more will come and join.’”

On March 12, 2015, the U.S. Coast Guard renamed a building at its Staten Island base in her honor. She said that she hoped that her efforts in the Coast Guard would lead to barriers falling beyond the military.

“I have a feeling that even though we weren’t paid, we [African Americans] worked in this country for hundreds of years, so it’s our country too,” she said. “I feel that we should be in everything the country has.”

After leaving the Coast Guard, Hooker used her G.I. benefits to get her master’s degree in psychological services at Columbia University. She then interned in a prison where she worked with people with developmental disabilities.

“I knew that there’s some good in everybody,” she said. “I was knocking myself out trying to bring it out, because I thought they [the prisoners]needed to know that just because someone has made a mistake in life, that doesn’t mean that they go through life making mistakes.”

She got her doctorate in psychology at the University of Rochester, where her research focused on the learning abilities of children with Down syndrome. She remained focused on developmental disabilities throughout her career. Inspired by the research she was reading, she said she focused on motivation techniques that allowed children “to do difficult tasks that you would not think that were within their realm of efficiency.”

“I thought, I’m going try this with children who have Down syndrome, because most people were shocked when a doctor would tell them, ‘Don’t get attached to the child, just put it away and forget about it’—and there were people doing that,” she said. “I thought, why don’t I study trying to improve the motivation of the children. So, I did.”

When Hooker joined Fordham’s Department of Psychology in 1963, the department was not only predominantly white men, but it was more Jesuit as well, said Harold Takooshian, Ph.D., professor of psychology. She bonded with another female colleague, Anne Anastasi, Ph.D., the legendary psychologist that The New York Times dubbed the “testing guru” for her groundbreaking work in psychometrics.

“Back then the Jesuits in the department saw lay people as outsiders,” said Takooshian.

Takooshian met Hooker after Anastasi died in 2002. He organized a memorial for Anastasi in Chicago, and he said Hooker, nearly two decades out of retirement, flew at her own expense to the service to honor the colleague whose office had been next door to her own.

“Olivia loved Anne, I never saw the two together but their bond was very strong.”

At the memorial, Hooker spoke of bringing Anastasi into her classes. “When I invited Anne to speak to my students in Issues in Clinical Services for Ethnic Minorities, the students were enchanted,” Hooker said. “She showed very special interest in minority colleagues, in students, and women professionals.”

It’s a compliment that could have been said about Hooker herself. Celia Fisher, Ph.D., Marie Ward Doty University Chair in Ethics and director of Fordham’s Center for Ethics Education, said that well after Hooker left Fordham in 1985, she continued to fight for inclusivity in the field.

“Following her ‘retirement,’ she was working harder than ever to ensure the field of psychology and federal, state, and local agencies were inclusive and working toward the benefit of all peoples,” Fisher wrote in an email. “She was always available to mentor students, and provided much-needed hope and modeling for success for students and early-career ethnic minorities.”

Though Hooker paid special attention to advancing minorities in psychology, her research stood apart from any particular racial identity. Despite the gender and racial barriers she faced, Takooshian said she leveled the playing field with her intellect, which he referred to in a speech honoring Hooker.

“I consciously did not mention that she was black,” he said. “The fact was she was a fantastic person, you don’t have to put the work black in there, she was one of a kind—a real psychologist.”

Nevertheless, Hooker consciously introduced black culture to her majority white students. Though she primarily worked with Ph.D. candidates, she said that when she did teach an undergraduate course on testing, she took the students to Harlem to see the work of black nuns at the Saint Benedict’s Nursery, one of the first preschool programs in the country.

“Most of them believed that if they went to Harlem they would never come back,” she said. “So, I took them down there to get their practice work done on testing. Most had never even seen an African-American sister. It opened their eyes, because that nursery was so well managed, people sent their children from all over the city.”

Though Hooker never married or had children of her own, she had three “godchildren,” whose parents, she said, “shared them with me very generously.”

A Lifetime of Proving Herself

Despite her accomplishments, Hooker continued to face prejudice, even among her own colleagues.

At Fordham, she recalled, one Jesuit questioned her credentials.

“He really thought the only reason I was on campus was because I had gotten a spurious degree and wiggled my way in, not through competence, but because of affirmative action,” she said.

She defended her alma mater with such conviction that the priest sheepishly gave her a gift the following day. Having noticed that she got a static shock each time she touched her office door handle, he got her a handle cover.

“You meet people sometimes who are misled, but you have to try to understand them,” she said. “Sometimes it’s a little hard to forgive, but you just have to keep on keeping on.”

Even among some colleagues within the psychological community, she faced doubts about her abilities. She said she spent 10 years as chair of the Constitution Committee of a local division at the American Psychology Association, but when she sent in her application to become a fellow, which would have made her eligible for national office in the association, she was turned down. She said the rejection letter praised her stellar references but they decided “we’re gonna bury them,” she remembers thinking.

Despite her history of fighting bigotry at the very top levels, this time Hooker decided to sit it out. One colleague, however, was not so satisfied. She said he took on her fight and she was eventually certified as a fellow. But at that point, credentials didn’t matter to her any longer; teaching did.

“I really concentrated on my students who were working toward their doctorate, I was trying to expand their minds, make them aware of other cultures,” she said.

Mentorship was an important element of teaching for her.

“You don’t just throw a package at someone; you spend some time with them and make sure they know you cherish them,” she said. “You have to be sensitive to the needs of students and give wholly. You have to let them know they have a talent and try to bring it out. That’s one of the joys of teaching.”