skip to main content
Return to Fordham University
You are at:Home»University News»Program Helps Bronx Latina Leaders Lead
Photos by Tom Stoelker
The Values and Faith-Based Leadership Program, a unique course for women in the Bronx, has brought together Latinas who are known within their communities as leaders because of the volunteer work they do. At a Sept. 15 session on Fordham’s Rose Hill campus, Adjunct Professor Valerie Torres, Ph.D., FCRH ’83, GRE ’01, ’08, led the women in the Hail Mary.

“I start the class with prayer because we modeled the class based on what their community is,” said Torres, noting that most of the women volunteer at Catholic faith-based organizations.  And so began the second fall session of the 10-month program, which started with a three-week seminar this past August and ends next May. The program represents a joint effort between the Institute of American Language and Culture (IALC) and the Graduate School of Religion and Religious Education (GRE).

“We want the women to know that the gate is open, we’re welcoming them here in Fordham,” said Torres, who grew up in the East Tremont section of the Bronx and taught at Aquinas High School, where she chaired the department of religion and was campus minister there. “But we eventually want them to be leaders in both places, in their neighborhood and here at the University. And they come ready to learn.” 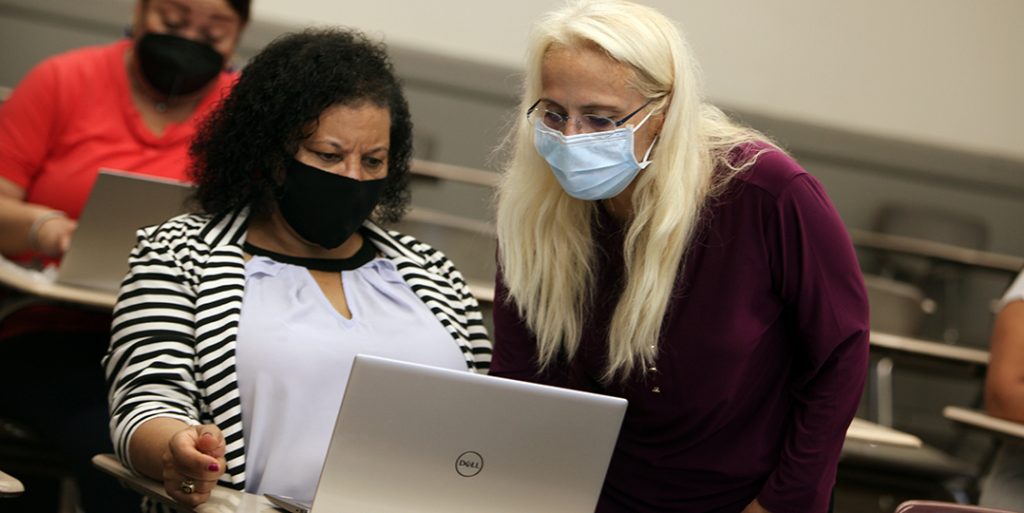 Leadership Grounded in Spirituality and Reflection

The course is anchored in the tenets of Ignatian leadership, said Faustino “Tito” Cruz, dean of GRE.

“This program is rooted in the theories and practices of transformational leadership and intercultural adult community education. It is intended to prepare participants for leadership in spiritually or faith-based contexts,” said Cruz. “It provides students with the skills to critically reflect on their daily lives and struggle, interpret the knowledge that is gained from this reflection, and act toward change for justice, solidarity, and service.”

“There’s a need and desire for these women to contribute more and be recognized for it, and not just lead in the shadows,” he said.

The students examine female leaders in the Bible and reflect on Latino leadership theories in the bilingual curriculum developed jointly by GRE and IALC. The theoretical work helps them identify and enhance their skills as leaders in the community. Although the women are already established volunteers, the course stipulates and formalizes an experiential learning component of the course, which requires them to volunteer 40 hours at a community or faith-based organization to put their leadership skills to work. 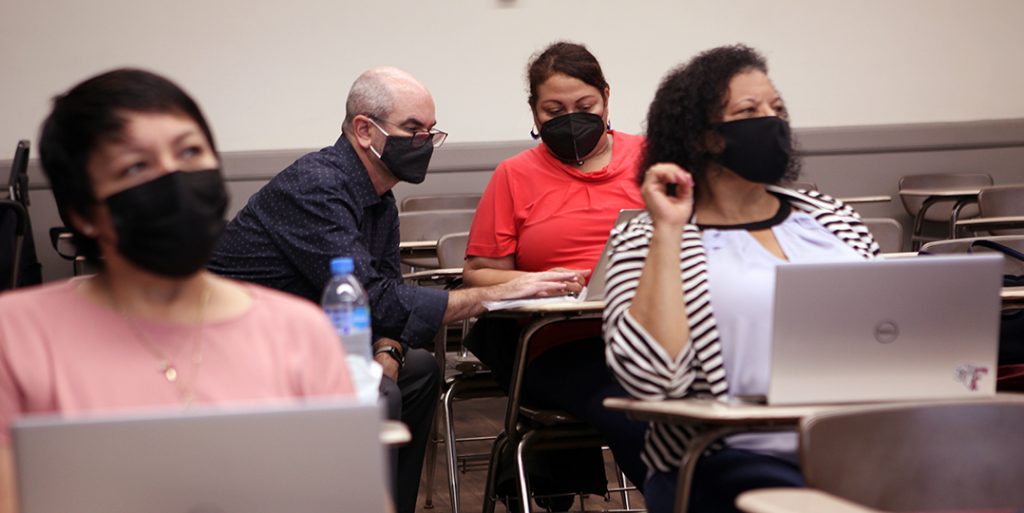 IALC Director James Stabler-Havener was on hand to assist with the class on Sept. 15.

Nearly all the women hail from the IALC’s Community ESL Program, which is funded in part by the Mother Cabrini Health Foundation. But this course is more than an ESL class. Rather, it’s a leadership course facilitated primarily in Spanish and peppered with conversational English, said Jesús Aceves Loza, the institute’s community program manager.

“The goal is for the participants to strengthen their communicative skills in English while tapping into their knowledge and expertise of Spanish,” he said. “In addition, some of the topics of the program are designed for participants to use their mother tongue as a means to practice discernment and contemplation.”

Cruz said he first encountered IALC when he approached the staff to help some of the GRE students with graduate-level writing skills.

“At the time I wasn’t aware of how grounded the institute was in community engagement; they’re teaching much more than ESL, they’re teaching professional development,” said Cruz. “For our part, GRE must engage in the life of the community. As practical public theologians, we can’t practice only on the third floor of Keating Hall.”

Cruz said GRE has been able to support the program through grants and gifts, particularly from the Sarah and Jack Knight Fund for Pastoral Innovation and Practice. Cruz said that he and Torres had worked together on a similar program that partnered with Aquinas which helped neighboring high school students there connect with the University. But once the students graduated from the high school, the two observed that Fordham was no longer as accessible to them or their families. By working together with the IALC, they were able to tap back into that community by identifying trusted leaders and offering them much-needed resources and training.

“Eighty-three percent of our students are women and 80% are from Latin America; some have a high school degree and some have a master’s. We got to know them as leaders through our community ESL programming,” said Aceves Loza. “GRE has been instrumental because they have expertise in forming leaders in the Jesuit tradition, though the course is open to any faith.”

Students gain computer skills and communication skills as well, he added. All the women were given laptops as part of the program.

“These tools and skills will give them the agency and confidence to begin working for some of the places they volunteer at,” he said.

Stabler-Havener added that while volunteer work is valuable to communities being served, as well as for volunteers, many of the women could also be employed by the institutions they serve. He said the hope is that earning a certificate from Fordham will help to legitimate the work they are doing.

“These are leadership skills that will translate into better employability and more recognized authority—and not to do the work for free, their leadership is valuable,” he said. 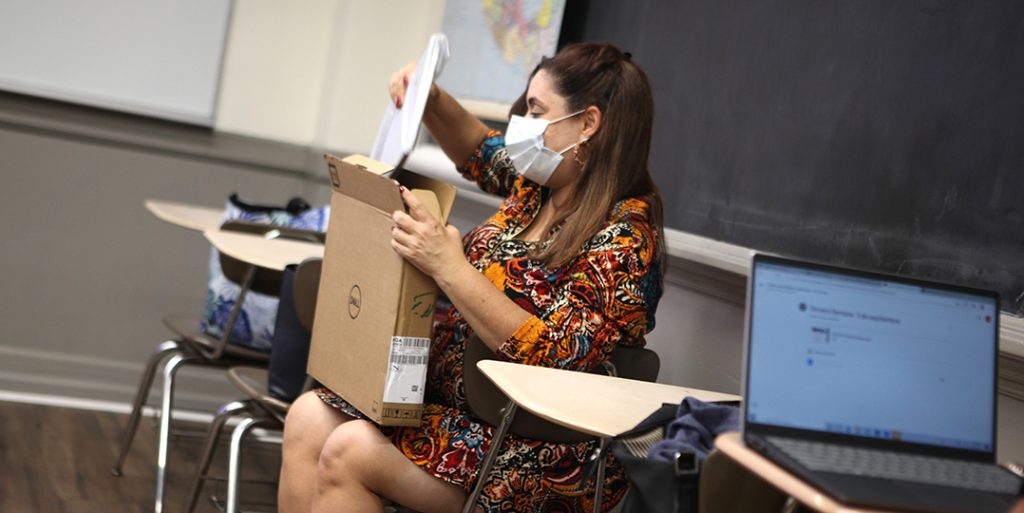 Finding a Calling in a New Home

Raysa Veras moved to Co-op City to take care of her father before his recent death, from cancer. She said that when she was living in the Dominican Republic she worked with displaced Haitians as a social worker at the border between the two countries. Today she volunteers at the shelter run by Xavier Mission in the Bronx, as well as Montefiore Hospital. She hopes that the skills she gains in the course will allow her to do the work she was trained to do back in the D.R.

“At the border, there were so many poor people and for years I helped, but now I want to learn because I want to help my people.”

Aceves Loza said the program offers the women an opportunity to immerse themselves in academic culture and guides them in what’s needed for a U.S. degree in the future.

“Here Raysa can begin to find her voice in this new country by gaining agency and a sense of belonging,” he said. “This is fundamental for anyone who has moved to the U.S. from abroad holding a previous academic credential: the realization of who we were in our home country and the question of who do we want to be here is daunting and powerful. It requires a leap of faith and a support system. And this is one of the most valuable aspects of the program.”

“For me, the computer was a surprise, because [it]is too expensive,” she said. “For me […] it’s mi sueño, this is my big dream, to study here at Fordham.”