skip to main content
Return to Fordham University
You are at:Home»University News»Professor Uses Community-Based Approach to Study Impact of Alzheimer’s and Dementia

For several years, Monica Rivera-Mindt, Ph.D., professor of psychology, has practiced a community-based research approach that examines the nuances of a community to better address health outcomes. Last month, she received a grant of nearly $750,000 from Genentech Health Equity Innovations to explore how to digitally engage Black adults nationally who are coping with Alzheimer’s and dementia. She has also received an additional $162,000 to increase engagement with Black men for research on the same subject from the National Institute of Health. The results of this work will be presented at a three-year conference series starting in 2022. For these projects, she plans to employ the same “culturally tailored” approach she’s been using for years at a national level. 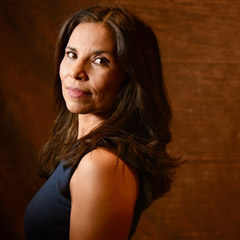 “Traditionally, researchers are trained to use a revolving door model where they go into vulnerable communities like conquistadors, they get the gold, and because we’re scientists the gold is data, put it in a sack over their shoulder and then go back to the ivory tower,” said Rivera-Mindt. “The communities never benefit from that work. There’s no positive feedback loop.”

The grant from Genentech, a subsidiary of the biotech giant Roche Group, is for a two-year study. She will be working with scientists who specialize in Alzheimer’s disease and health disparities research. The goal is to work with the community to develop a culturally-tailored digital platform and social media campaign to increase research participation and engagement of Black adults.

Though her research has shifted to cognitive aging, for years Rivera-Mindt’s academic career was dedicated to investigating the effects of HIV, substance use, and substance use treatment on the brain—particularly among Latinx and Afro-Caribbean populations. She published papers on how certain diverse ethnic groups are often researched as one whole, such as the Latinx population. This is problematic, she said, because being Mexican, for example, is a very different experience than being Puerto Rican, and even regions within Mexico are extremely diverse.

In 2010, The Clinical Neuropsychologist published her paper, “Increasing Culturally Competent Neuropsychological Services for Ethnic Minority Populations.” The paper represented a “call to action” for a discipline that she said was ill-equipped to handle the increasing diversity of the nation. The paper has been frequently cited for its recommendations to neuropsychologists on how to tailor their work in research, clinical services, and infrastructure for the communities they serve.

This January, the same journal published an article Rivera-Mindt wrote titled “White Privilege in Neuropsychology and Norms for Spanish Speakers of the US-Mexico Border Region” that reexamined the problem with a particular focus on the border region, though many of the themes were universal and drew from her earlier work, she said. The pandemic exposed stubborn issues of underrepresentation that she argued may be exacerbated by “white privilege and a lack of appropriate normative data.”

“There have been some gains from 2010 to 2021, and it’s still the case that a neuroscience and neuropsychology workforce is not well equipped to handle the country’s diversity and we continue to grapple with how best to prepare the workforce,” she said.

Over time, her research goals have changed with community needs. Such is the case with Alzheimer’s and dementia research, where the community has prompted Rivera-Mindt’s current focus. She noted that while the Black population is significantly overrepresented in terms of risk, they’re woefully underrepresented in the research—particularly Black men.

Rivera-Mindt said the community-based approach requires researchers to become involved in the communities they are studying. Over the years, this has meant that she has not only studied the Harlem and East Harlem communities, but she’s participated in neighborhood events.

“I took my kids to community meetings, I went to monthly meetings of the Harlem Community and Academic Partnership and the Manhattan HIV Care Network,” she said. “I needed to earn trust. So, I kept my mouth shut and kept my ears and eyes open.”

Once she gained the trust of the community, she was able to offer her services and knowledge. She was soon giving lectures on the importance of brain health, and it was there that her work with the aging population began.

She noted that Latinx and Black individuals are up to three times more likely to develop Alzheimer’s or related dementia than white people. At the same time the same populations are aging at a faster rate, the ripple effects of which are staggering, she said.

“Or workforce capacity will be affected by the health care and caregiving that’s needed for these older adults, and that’s just one of many issues,” she said.

Today, she lives in Harlem and her children grew up going to public school there. She wears multiple hats at the community meetings now, as a community member, a parent, and as a researcher.

“It brought the work to such a deeper level. It has so much more meaning,” she said.

Rivera-Mindt said the pandemic has exposed the challenges of conducting community-based research. People who are most affected by Alzheimer’s and dementia, namely older adults, are frequently less tech-savvy and can no longer attend the community health meetings which have moved online. Rivera-Mindt has had to rethink ways to connect with her community partners. The Genentech grant money has allowed her to convene a Community-Science Partnership Board (CSPB) composed of community members and stakeholders at the start of the study, thereby involving the community from the beginning.  The members of the board will use a large-scale digital resource called the Brain Health Registry to help examine and track the effects of Alzheimer’s and dementia in the Black community.

“We’re starting out at the ground level, but we’re acutely aware of the digital divide and thinking deeply about how to address it by not necessarily focusing all of the digital engagement towards older adults, but instead reaching out to their children and their grandchildren and taking a multigenerational approach,” she said. “We could really make it a family affair and educate everybody about the importance of getting involved.”